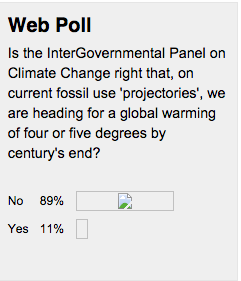 Open Letter to the Abbott Government

The ABC - that Alarmist organisation that fails to fulfil its own charter,  "Their (not our) ABC" has run a poll asking the question: (link)

Is the InterGovernmental Panel on Climate Change right that, on current fossil use 'projectories,' we are heading for a global warming of four or five degrees by century's end?

The people have spoken!

At last count, 89% of the people do not believe the IPCC.

Only 11% of the people have been fooled by the  greatest #climate #scam  foisted on humanity.

Mr Abbott: Once your were quoted as saying that

The Alarmist ABC's poll has made it easier for you to man up and make the right decisions regarding the #AGWHoax.   You said:

It is now clear that more than 80% are aware that man made climate change is not real and is not a present danger.