Climate change is happening,  (true - It always has)

It's almost entirely man's fault (not true - there is no proof)and limiting its impacts may require reducing greenhouse gas emissions to zero this century (do they understand that we need CO2 for life on this planet? ) the U.N.'s panel on climate science said on Sunday. (link) 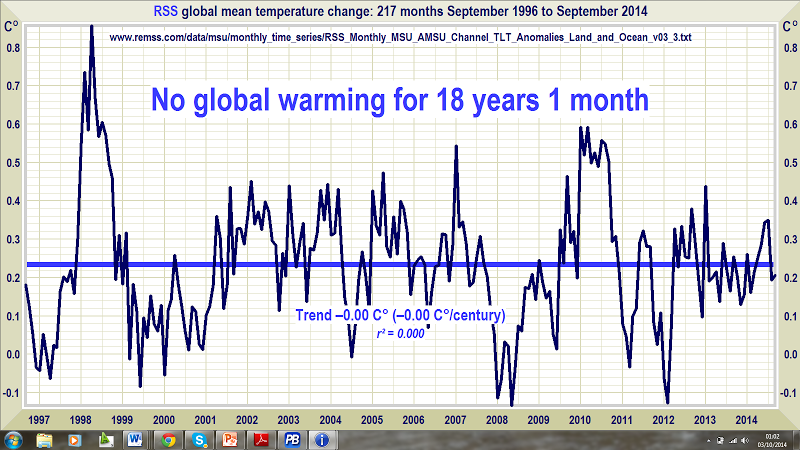 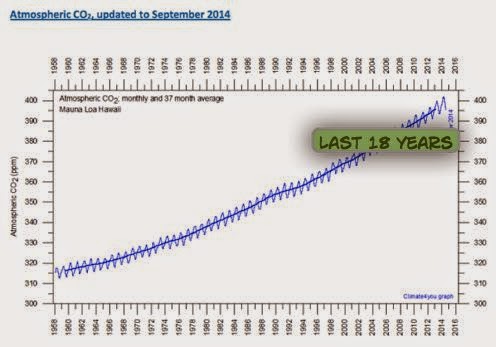 So remind me again what the Alarmists are worrying about?


Carbon Dioxide emissions must be reduced by almost half by 2030 or global temperatures will eventually rise by between 2ºC and 5ºC, the Intergovernmental Panel on Climate Change will warn today. - See more at: LINK


Emissions, mainly from the burning of fossil fuels, may need to drop to zero by the end of this century for the world to have a decent chance of keeping the temperature rise below a level that many consider dangerous.


The world faces the "very high risk of severe, widespread and irreversible" impacts from climate change without action to cut emissions, a major international report has warned

Experts warned there was little time before the window of opportunity to limit temperature rises to below dangerous levels closed, and that delaying action would greatly increase the costs.

The warning came as the United Nations climate body published the final report of its latest assessment on the science of climate change, drawing together three studies published in the past year.

UMMMM....as the two graphs above show...at least for the last 18 years, there does not seem to be any correlation between atmospheric CO2 and (the lack of) global warming.

Well......the long term history, as accepted by climate scientists the world over, shows that global temperature rises BEFORE rise in carbon dioxide.

Temperature rises and this is followed by a rise in atmospheric carbon dioxide.

All climate scientists accept this FACT.

Oh, but that's all in the past.

So when did "man start meddling?"

What happened to temperatures and carbon (why-oh-why don't they say carbon dioxide? What emissions can a pure form of carbon -a metastable allotrope of carbon, ie a diamond emit?) after WW2?

Sheesh.....after WW2, when everything was busting out, when industry was developing, when cars were becoming more common, when households started using vacuum cleaners and washing machines and dish washers, TVs etc etc....all that use of fossil-fuels.

And what is happened to "THE WARMING?"

After WW2 the world cooled for thirty years.

And what is happening now?

Well, according to the "alarmists" source HADLEY CRt4, the temperature has been cooling since 2004.

An online version of the following news release may be seen at: http://tinyurl.com/k627jqa .

Ottawa, Canada, November 2, 2014: “IPCC Chairman Dr. Rajendra Pachauri was right to advocate “a global agreement to finally reverse course on climate change” when he spoke to delegates tasked with approving the IPCC Synthesis Report, released on Sunday," said Tom Harris, executive director of the Ottawa, Canada-based International Climate Science Coalition (ICSC). “The new direction governments should follow must be one in which the known needs of people suffering today are given priority over problems that might someday be faced by those yet to be born.”

“Yet, exactly the opposite is happening,” continued Harris. “Of the roughly one billion U.S. dollars spent every day across the world on climate finance, only 6% of it is devoted to helping people adapt to climate change in the present. The rest is wasted trying to stop improbable future climatic events. That is immoral.”

ICSC chief science advisor, Professor Bob Carter, former Head of the Department of Earth Sciences at James Cook University in Australia and author of Taxing Air explained, “Science has yet to provide unambiguous evidence that problematic, or even measurable, human-caused global warming is occurring. The hypothesis of dangerous man-made climate change is based solely on computerized models that have repeatedly failed in practice in the real world.”

New Zealand-based Terry Dunleavy, ICSC founding chairman and strategic advisor remarked, “U.N. Secretary General Ban Ki-moon often makes unjustified statements about climate change and extreme weather. However, in their still unanswered November 29, 2012 open letter to the Secretary General, 134 scientists from across the world asserted, ‘The U.K. Met Office recently released data showing that there has been no statistically significant global warming for almost 16 [now 18] years. During this period…carbon dioxide concentrations rose by nearly 9%…The NOAA “State of the Climate in 2008” report asserted that 15 years or more without any statistically-significant warming would indicate a discrepancy between observation and prediction. Sixteen years without warming have therefore now proven that the models are wrong by their creators’ own criterion.”

“Although today’s climate and extreme weather are well within the bounds of natural variability and the intensity and magnitude of extreme events is not increasing, there is, most definitely, a climate problem,” said Carter. “Natural climate change brings with it very real human and environmental costs. Therefore, we must carefully prepare for and adapt to climate hazards as and when they happen. Spending billions of dollars on expensive and ineffectual carbon dioxide controls in a futile attempt to stop natural climate change impoverishes societies and reduces our capacity to address these and other real world problems.”

“The heavily referenced reports of the Nongovernmental International Panel on Climate Change demonstrate that, scientifically speaking, the global warming scare is over,” concluded Harris. “It is time to defund the IPCC and dedicate our resources to helping solve today’s genuine humanitarian problems.” (bold added -Ed)

The ICSC is a non-partisan group of scientists, economists and energy and policy experts who are working to promote better understanding of climate science and related policy worldwide. We aim to help create an environment in which a more rational, open discussion about climate issues emerges, thereby moving the debate away from implementation of costly and ineffectual “climate control” measures. Instead, ICSC encourages effective planning for, and adaptation to, inevitable natural climate variability, and continuing scientific research into the causes and impacts of climate change.

ICSC also focuses on publicizing the repercussions of misguided plans to “solve the climate crisis”. This includes, but is not limited to, “carbon” sequestration as well as the dangerous impacts of attempts to replace conventional energy supplies with wind turbines, solar power, most biofuels and other ineffective and expensive energy sources.

For more information about this announcement or ICSC in general, visit http://www.climatescienceinternational.org, or contact any of the following ICSC representatives:


ICSC Webpage: http://www.climatescienceinternational.org/index.php?option=com_content&view=article&id=393
Posted by Geoff on November 02, 2014 No comments: