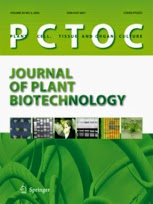 The aim of the present study was to evaluate the effects of forced ventilation and CO2 enrichment (360 or 720 μmol mol−1 CO2) on the in vitro growth and development of Pfaffia glomerata, an endangered medicinal species, under photomixotrophic or photoautotrophic conditions. P.glomerata nodal segments showed substantial differences in growth, relative water content and water loss from leaves, photosynthetic pigments, stomatal density, and leaf anatomical characteristics under these different treatments. CO2 enrichment led to increased photosynthetic pigments and reduced stomatal density of in vitro cultivated P. glomerata. A lack of sucrose in the culture medium increased 20-hydroxyecdysone levels, but the increase in CO2 levels did not further elevate the accumulation of 20-hydroxyecdysone. All growth increased in a CO2-enriched atmosphere. In addition, CO2 enrichment, with or without sucrose, gave a lower relative water loss from leaves. This finding indicates that either a photoautotrophic or photomixotrophic system in a CO2-enriched atmosphere may be suitable for large-scale propagation of this species.

According to Saldanha et al. (2014), "Pfaffia glomerata (fafia, ginseng brasileiro), a medicinal plant that naturally grows in Brazil (Pott and Pott, 1994), has great economic importance due to the production of secondary metabolites such as ß-ecdysone (20E) (Festucci-Buselli et al. 2008)," as a result of its "anabolic, analgesic, anti-inflammatory, anti-mutigenic, aphrodisiac, sedative and muscle tonic properties," which are described by Neto et al. (2005), Fernandes et al. (2005), Festucci-Buselli et al. (2008) and Mendes (2011). As a result of these facts, Saldanha et al. report that "many patents related to pharmacological and nutritional properties of genus Pfaffia have been published," citing Shibuya et al. (2001), Bernard and Gautier (20005), Olalde (2008), Rangel (2008), Loizou (2009) and Higuchi (2011). Not surprisingly, therefore, Saldanha et al. further write that "because of its economic relevance, the propagation of P. glomerata plays an essential role in producing raw material for the pharmaceutical industry," citing Saldanha et al. (2013). Against this backdrop, using two types of explant supports - either agar or Florialite (a mixture of vermiculite and cellulose) - the nine Brazilian scientists grew plantlets of P. glomerata in vitro within small acrylic chambers maintained at either 360 or 1,000 ppm CO2 for a period of 35 days, after which they assessed the plants' aerial and root dry mass, as well as the accumulation of 20E in their leaves and stems.

Saldanah et al. report that the extra 640 ppm of CO2 increased the aerial dry mass of the plantlets by 246% in the agar treatment and by 219% in the Florialite treatment, while it increased the root dry mass by 100% and 443% in the agar and Florialite treatments, respectively. In addition, they say that "the plants with a higher biomass also produced higher amounts of 20E." And in light of these findings Saldanah et al. state in the concluding sentence of their paper that their study highlights the fact that "a photoautotrophic system under CO2 enrichment may be attractive for the achievement of autotrophy by CO2, thus potentially being useful for the large-scale commercial production of Pfaffia seedlings or even for producing Pfaffia biomass containing high levels of ß-ecdysone." And that would help the pharmaceutical industry to produce a lot more of the medicinal products derived from this plant.
Posted by Geoff on October 04, 2014 No comments: