Why do people still listen to the alarmist scientists? Their threats of doom and gloom have failed to materialise over and over again.

TIPPING POINT.
Take for example the threat of the tipping point. It has not happened in all the long long time of the world's existence. It didn't happen when atmospheric CO2 was at 7000 ppmv, so why would it happened with CO2 at four hundred ppmv?

That point alone should make the alarmists objects of ridicule.

97% CONSENSUS.
All alarmists who mention the consensus should be laughed out of the room, have their grants taken away. This false consensus has been exposed many times in many places.


This number (97%) will prove a new embarrassment to the pundits and press who use it.

See also the many links to 97% consensus on this blog.


After all, Flannery once claimed the Arctic ice could melt completely away by, er, last year.
He claimed Sydney, Adelaide and Brisbane could be all out of water by, oops, a couple of years ago now.
Yet no matter how many dud predictions Flannery makes, almost no scientist ever corrects him.
It’s as if they don’t care how wrong he is in the warming cause.

Would you buy a used car climate prediction from this man?

GLOBAL CLIMATE MODELS.
I used to keep track of the weather predictions on a calendar, adding the next days predictions etc. It used to look like this

It's no wonder that the GCMs used to project future climate are just as disastrous.

95% OF CLIMATE MODELS AGREE: THE OBSERVATIONS MUST BE WRONG 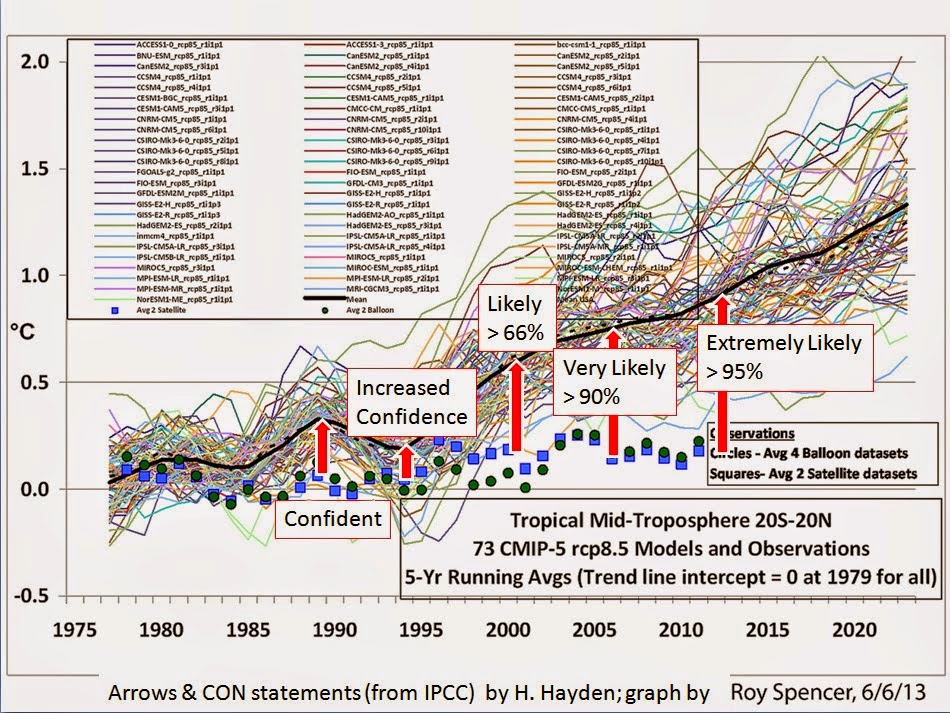 NO SNOW.
How about Dr. David Viner, senior research scientist at the climatic research unit (CRU) of University of East Anglia who said:

Within a few years children just aren't going to know what snow is. Snowfall will be a very rare and exciting event.

LONG-RANGE weather forecasters have warned that Britain should prepare for heavy and persistent snow for up to THREE MONTHS with winter 2013 set to be the worst in more than 60 years.


How many times have you heard that the Arctic will be ice-free by.....

For instance, take this report from the Christian Science Monitor (Are THEY scientists?) from June 1972: (link)

Arctic specialist Bernt Balchen says a general warming trend over the North Pole is melting the polar ice cap and may produce an ice-free Arctic Ocean by the year 2,000.

Earth has gained 19,000 Manhattans of sea ice since this date last year, the largest increase on record. There is more sea ice now than there was on this date in 2002.

The alarmist's failures go on and on and still the MSM publish their next prediction of doom.

Another Issue of "Carbon Sense” prepared by The Carbon Sense Coalition.
Please pass on. We rely on our supporters to spread the word.

Wind and solar are parasitic power producers, unable to survive in a modern electricity grid without the back-up of stand-alone electricity generators such as hydro, coal, gas or nuclear. And like all parasites, they weaken their hosts, causing increased operating and transmission costs and reduced profits for all participants in the grid.

Without subsidies, few large wind/solar plants would be built; and without mandated targets, few would get connected to the grid.

Green zealots posing as energy engineers should be free to play with their green energy toys at their own expense, on their own properties, but the rest of us should not be saddled with their costs and unreliability.

We should stop promoting parasitic power producers. As a first step, all green energy subsidies and targets should be abolished.

The reality of green energy:
http://wattsupwiththat.com/2014/07/18/the-stark-reality-of-green-techs-solar-and-wind-contribution-to-world-energy/