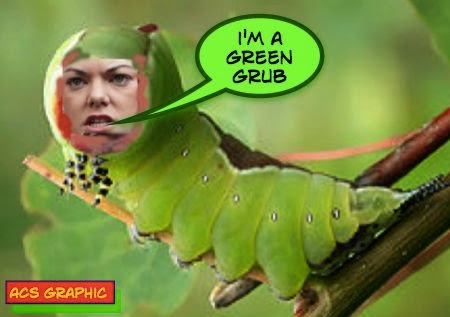 After the repeal of the despised tax on vital to life carbon dioxide, the tax that, according to IPCC Scientist Professor Roger Jones (link), would reduce, by 2100,  global temperature by four thousands of a degree, Sarah Hanson-Young(@SarahinSen8) tweeted: "climate sceptic grubs."

This got me thinking.......what colour are most grubs?

Now, I am probably wrong, but I get a strong image in my mind and that image is Green.

When I worked in the pottery industry, I worked with a marvellous industrial chemist who was great at creating and naming glazes;  Great Keppel Blue is one that comes to mind.

Perhaps, if Tom was still with us, he could create a new colour called Sarah Hansen's Grub Green.

He could also create some colours for some of SHY's fantasies, like Sea Patrol red (the colour her