In another post I had referred to some good graphing work by Shea Lewis. This time Shea has responded to a criticism of the temperature pause graph prepared and regularly updated by Lord Monckton: 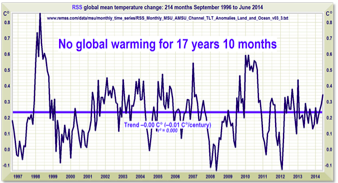 A Facebook poster in the customary Alarmist way has prepared a graph allegedly debunking this pause: 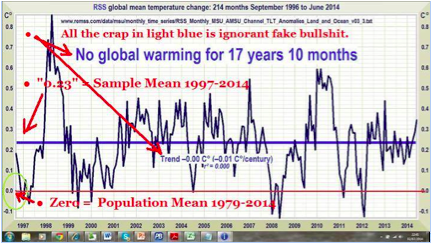 The graph is from RSS data. RSS compares its data by reference to a baseline. The baseline is the reference period of years which is used to compare particular years and periods of temperature both within the base period and outside it. RSS uses a base period of 1979-1998, or 20 years.

Monckton’s pause covers the period from 1997 up to the present. The method for determining this pause is described by Werner Brozek. Brozek uses the same method employed by both Skeptical Science and Phil Jones from UEA. You go back from the present in the data to the furthest month from the present with a negative slope and then see if that trend is continued from the next month to the present.

It is a straightforward statistical technique for established trends to the present. Currently RSS is 17 years and 10 months as Monckton’s graph shows.

What has confused and angered the Facebook poster is that the period of the temperature pause is warmer than the base period. But this is comparing apples and oranges and we see this in the equally fallacious alarmist claim that each decade is warmer then the next. 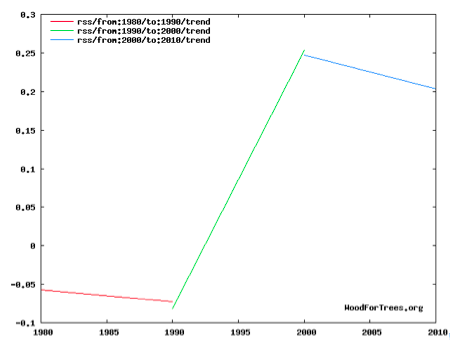 This is plain from the graph of RSS data in the decades from 1980 to 2010. The 2010 decade is still hotter than the 1990 decade but has a declining trend. Which contradicts AGW.

Another nail in the AGW coffin.
Posted by Geoff on July 04, 2014 No comments:

Be skeptical. But when you get proof, accept proof. 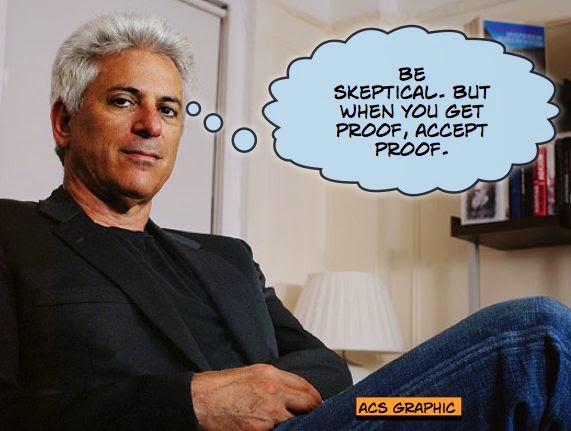 ACS put the above quote (in quotes) into google and got 682 hits. It is attributed to Michael Specter.

Michael Specter (born 1955) is an American journalist who has been a staff writer, focusing on science and technology, and global public health at The New Yorker since September 1998.

He has also written for The Washington Post and The New York Times. (wikipedia)

In Denialism, New Yorker staff writer Michael Specter reveals that Americans have come to mistrust institutions and especially the institution of science more today than ever before. For centuries, the general view had been that science is neither good nor bad—that it merely supplies information and that new information is always beneficial. Now, science is viewed as a political constituency that isn’t always in our best interest. (bold added)

His book seems not to cover the man-made global warming debate, however the non-science of the "consensus" scientists has surely contributed greatly to the the public's mistrust of the scientific community.


That quote by Michael Specter is brilliant for describing what true skepticism should be. In the media machine today, the term “skeptic” is often applied to people who accept pseudoscience because they are “skeptical” of mainstream science: “vaccine skeptics,” “climate skeptics,” “pharmaceutical skeptics,” and so on. The term gives these people (and other similar groups) a bit too much credit. Generally, they are ignoring proof and evidence.  Michael Mann, a climate scientist from Pennsylvania State University, summarized it best when he said, “Denying mainstream science based on flimsy, invalid, and too-often agenda-driven critiques of science is not skepticism at all. It is contrarianism … or denial.”

A true skeptic is willing to look at all of the scientific evidence available and is willing to analyze it without bias. When the evidence says something, a skeptic can accept the outcome before them…until new evidence is presented.

Looking at the scientific "proof and evidence" available, rather than FQTQ's 'pseudoscience,' we can see that the rise in atmospheric Carbon Dioxide follows the rise in global temperature (link)


After temperatures rise, on average it takes 800 years before carbon starts to move. The extraordinary thing is that the lag is well accepted by climatologists, yet virtually unknown outside these circles. The fact that temperature leads is not controversial. It’s relevance is debated.

While it only needs once, the Man Made Global Warming (AGW) hypothesis has been falsified many times. As Einstein said:  “No amount of experimentation can ever prove me right; a single experiment can prove me wrong.”

When future generations try to understand how the world got carried away around the end of the 20th century by the panic over global warming, few things will amaze them more than the part played in stoking up the scare by the fiddling of official temperature data. There was already much evidence of this seven years ago, when I was writing my history of the scare, The Real Global Warming Disaster. But now another damning example has been uncovered by Steven Goddard’s US blog Real Science, showing how shamelessly manipulated has been one of the world’s most influential climate records, the graph of US surface temperature records published by the National Oceanic and Atmospheric Administration (NOAA). (See also WUWT.)