Climate Change is here to stay. Climate Funding gone away.

With Apologies to the “Banjo.” 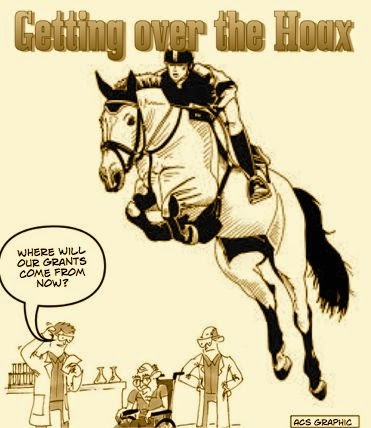 That the colt from Manly beach had done away

With the wasted climate funding. It was worth six billion bucks

Alas, a waste half billion was to stay.

All the Global Warming Nazis with their grants now under threat

Had rolled out all their false Alarmists stuff

But Australians love real science and they wanted to forget

Although the AGW hypothesis has been falsified multiple times, the Global Warming Nazis are railing against the cuts to useless "climate change" projects.

For Instance, from Sydney Moaning Herald:


Graeme Pearman, a scientist who led CSIRO’s atmospheric research team for a decade until his retirement in 2002, said the government had adopted an "extreme" ideological approach in all but rejecting global warming as an issue despite ever-mounting evidence of the threat posed by more frequent extreme weather.


“There’s a hope that the problem will go away, that someone else in the world will actually fix it,” Dr Pearman said. “The approaches now are pretty mindless ... They’re not concerned about our children’s and grandchildren’s futures at all.


Either Graeme Pearman is joking or he has not kept up with the current science. It is not the government who is rejecting "global warming," but it is the Globe that has rejected "global warming."

There has been no statistical global warming since Pearman retired twelve years ago. In fact no global warming for almost 18 years. And, even the flawed IPCC admits that extreme weather is NOT caused by "global warming."

“The energy infrastructure we have was effectively designed in the 19th century ... it’s not fit-for-purpose in the 21stcentury”, when greenhouse gas emissions will have to be slashed to limit rising temperatures, Mr Bourne said.

Actually, in the 21st Century there has been NO rising temperatures whilst atmospheric CO2 keeps rising.

As the poem above says:" the Global Warming Nazis (GWNs) ...........Had rolled out all their False Alarmists stuff" and, right on cue the Alarmist ABC rolled out GWN John O'Connor: (link)

This is the Backwards Budget - a budget that shifts the burden for pollution reduction from polluters to taxpayers. A budget that slashes renewable energy agencies and funding programs that are helping create the jobs and industries of the 21st century. A budget that rips hundreds of millions of dollars away from climate science, international climate finance and clean technology research programs.

Explain pollution, Mr O'Connor. Can you point to one single study that shows that vital-to-life Carbon Dioxide (CO2) is a pollutant. We know that the increase in CO2 has been greening the planet, increasing food supplies for man and beast. If we reduce this plant food and therefore reduce food for man and beast, we threaten the future of our children and grandchildren.

SMH Cartoonist Cathy Wilcox has shown she has no understanding of "climate change."

Two of her recent efforts:

No Cathy, Climate has changed since the world was formed. Your cartoon should read: "......And then there was a change of government and the wastage propping up the falsified global warming hypothesis just...went away." And HOORAY for that! 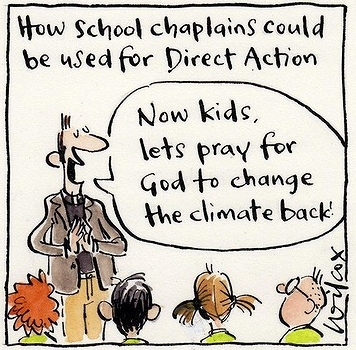 Change Climate Back to What, Cathy? Back to the Medieval Warm Period when it was warmer than the late twentieth century warming? Back to the Little Ice Age when the Thames froze over each year?

Or an even greater threat; our current period is called an interglacial - a period between glacials or ice-ages. Eventually the world will return to glaciation. Can you image North American under ice like the depiction below? Is that where you want God to take us?