I used to collect Marvel comics and Captain America was one of my favourites. He personified the Marvel narrative of the virtues of friendship, loyalty and respect. Captain America’s community was based on mutual support.

The Cap’s primary foe was the Red Skull. Skull wasn’t just a Nazi, he was the über Nazi who had obtained a mystical source of power and justification for wanting to conquer the world. Skull’s community, Hydra, was based on coercion and enslavement.

Marvel has come a long way since the old Jack Kirby and Stan Lee days. In the latest Hollywood blockbuster, Captain America: The Winter Soldier, new technologies and new values confront the Captain. And Hydra, the Captain’s old villain has reinvented itself. The similarity with man-made global warming [AGW] is manifest. AGW used to be cooling and has now reinvented itself as warming.

The old comics use to cost 12 cents; now the Winter Soldier costs $170 million. The money involved in AGW is astounding. So it is not just the themes of Captain America which invoke AGW but also the cost.

In Winter Soldier, Hydra has infiltrated SHEILD, which is the bastion protecting Western democracy and Captain America’s community. Hydra wants to ‘protect’ humanity by forcing humanity to accept enslavement. The Hydra villain, Robert Redford, notes the old attempt by Hydra to enslave humanity was not successful because humanity was not ready. This time Hydra is going to make humanity ready to accept Hydra’s slavery by creating chaos and fear so that humanity will be willing to forgo freedom for security.

Of course the advocates of AGW do not hijack huge gunships and plan to use them on humanity. That would be silly. AGW instead has infiltrated our universities and science bodies, claims a consensus and sows fear and discord by predicting the end of the world unless the world accepts the leadership of AGW as personified by the UN and gives up democracy everywhere. That’s not silly.

Advocates of AGW have really got into the spirit of sowing fear and discord. For instance Professor Stephen Schneider famously said:

So we have to offer up scary scenarios, make simplified, dramatic statements and make little mention of any doubts…Each of us has to decide what the right balance is between being effective and being honest

And the Hydra like Club of Rome really got into Marvel super-villain mode when it said:

The common enemy of humanity is man. In searching for a new enemy to unite us, we came up with the idea that pollution, the threat of global warming, water shortages, famine and the like would fit the bill. All these dangers are caused by human intervention, and it is only through changed attitudes and behavior that they can be overcome. The real enemy then, is humanity itself.

Misanthropy rears its head regularly in the AGW narrative. And when The Club of Rome says The real enemy then, is humanity itself it doesn’t take much imagination to hear the Skull or his modern incarnation, Robert Redford in the Winter Soldier saying the same thing as he gleefully kills millions of people. Even though Skull and Redford’s character say they want to protect humanity we know they don’t like humans very much at all.

In the Winter Soldier Captain America wins the day with the help of a few friends against the hordes of Hydra. However, in the movie’s teaser we see Hydra continuing as per its motto if one head is cut off two more will take its place.

In real life it’s proving equally difficult to defeat AGW. Unlike Hydra it’s not so much a case of cutting off heads as the heads never shut up. Take the esteemed Professor Peter Doherty interviewed on the very Hydra like ABC.

The good Professor cannot help himself and says:

Last year wasn’t the hottest on record and the IPCC of course has no credibility at all, or at least after the audit by the InterAcademy Council [IAC] in 2010 should have no credibility. But the good Professor and many others like him continue to reference the IPCC as an undisputed source to base their scaremongering statements on. One senses the AGW fear mongers would like disasters to happen as this shows. That they don’t happen with extreme climate events not increasing must be a great source of disappointment to the AGW supporters. In fact they are so disappointed they regard each climate disaster as a good thing. For instance the UN’s Christiana Figueres saw a silver lining in the recent English floods because they got people talking about AGW again. That talk ceased abruptly when it was revealed the floods were largely due to Green policies.

Still Ms Figueres would make a splendid Hollywood villain. Her stern visage would sustain several subsequent further instalments of Hydra based spectaculars; she even appears to be in some super-villain outfit: 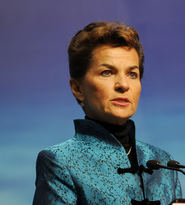 The only problem is while Captain America continues to fight Hydra in Hollywood who is going to fight Ms Figueres and the other AGW super villains in reality?
Posted by Geoff on April 15, 2014 3 comments:

Another Issue of "Carbon Sense” prepared by Viv Forbes and The Carbon Sense Coalition.


www.carbon-sense.com
15 April 2014
To view a print friendly pdf of this newsletter with all images see:
http://carbon-sense.com/wp-content/uploads/2014/04/food-free-fridays.pdf

Once again, the high priests of the UN/IPCC have forecast world starvation unless we mend our wicked ways.

According to them, unless we curb our use of oil, gas, coal and meat, the carbon dioxide levels in the atmosphere will soar, the globe will heat up, and food production will plummet.

This is just a rerun of their previous failed forecasts based on academic theories and computer models.

They should have asked practical nurserymen, farmers and meteorologists.

Nurserymen would tell them that if you pump carbon dioxide into a greenhouse the plants grow faster, bigger, more drought-tolerant and more heat-tolerant. Therefore more carbon dioxide will produce more food.


Farmers would tell them that plants grow faster in the warmth of spring and summer and slower in winter. Any warming by carbon dioxide would tend to warm the higher latitudes so the snow line will shift, thus creating more arable land. It would also tend to produce warmer nights, thus reducing frost damage to crops and opening more land to frost-sensitive crops.

Meteorologists would tell them that if global temperatures increase, evaporation from the vast oceans must also increase. What goes up with more evaporation must come down as more rain or snow. While some areas may become drier, a warmer world is on average a wetter world, producing more food.

There is also no evidence that extra carbon dioxide and warmth will make weather more erratic – in fact the reverse should occur as the global temperature gradient which drives winds and storms will be reduced with more warming at the poles.

Finally, there is no evidence that their climate scares will occur “much earlier than expected”. With global temperatures flat for 17 years, how can warming occur faster than in their previous failed forecasts?

There is no rational basis for claims that increased carbon dioxide in the atmosphere will add to world starvation – history and science tell us that it would produce a productive green and bountiful world. It is global cooling we have to fear.

Carbon Sense and the cartoon creator, Steve Hunter, have full rights to this cartoon, and grant permission for anyone to reproduce it in any media as long as the Steve Hunter signature remains on it. For electronic media, the source link should also be displayed.


On the other hand, there is no doubt that foolish climate POLICIES will produce less food. Policies on ethanol, biomass, carbon-credit forestry and the Kyoto bans on regrowth control, either directly consume food, or reduce the land available for food production. Encouraging and protecting trees at the expense of grasslands is threatening the production of low-cost food from marginal grazing lands and water restrictions are driving irrigators out of business. And to top it off, their taxes and regulatory wars on carbon energy will push marginal farmers and fishermen out of production. The world may indeed see hungry years, but carbon dioxide will not be the cause.

The Beneficial Effects of Global Warming for the Biosphere:
http://news.heartland.org/newspaper-article/2014/04/08/comprehensive-report-documents-beneficial-impacts-global-warming

The Food production lies of the IPCC:
http://www.c3headlines.com/2014/03/fundamental-lies-of-the-uns-ipcc-food-production-harmed-by-co2-warmer-temperatures.html

The Twilight of Abundance with the Cold Sun?
http://wattsupwiththat.com/2014/03/06/new-book-twilight-of-abundance/


Flood Plains are for Floods

Every month or so TV screens are filled with images of desperate people somewhere battling a flood.

Naturally “global warming” is usually blamed, but this claim will not hold water because, for 17 years, there has been no global warming. Moreover, nature’s floods have been reshaping the Earth for millions of years. And some past floods were far larger than modern floods, evidenced by the width of many flood plains - seldom are they completely flooded today.

The majority of homes and cities were built on flood plains, and for good reasons - closer to water, with fertile soil, better groundwater, flat country that is easier to build on, near good fishing holes and shady trees, and periodically re-fertilised with silty topsoil. In some countries rivers also provide local washing, latrine and transport services.

We hear alarmist stories about the soaring costs of floods. Records show that most floods are not bigger – it is just that more people are building more costly homes and infrastructure on flood plains. And unlike Australia’s early settlers, too few people put their houses on stilts out of the reach of most floods.

Those who choose to build/live on flood plains will usually pay less for their homes than those who buy a home on the hill with views. But they must also accept the costs that go with it – occasional flooding and expensive flood insurance.

Long term flood problems are increased when government steps in and “helps” those who buy/build on flood-prone land with repair subsidies, public works or insurance caps. This allows risk-takers to escape the real cost of their decisions. Then more people build on flood plains.

Flood diversions and levees may not help – too often they just shift flood water from one piece of land to another. Commonly, they also increase water speed, thus increasing the erosive power of the flood.

But governments must ensure that essential infrastructure is relatively flood-proof – roads, railways, airports and electricity should remain operational during most floods. And strategically placed dams will moderate the extremes of both floods and droughts.

Flood plains are for floods. Those who choose to live there will get flooded.

Is England’s Bad Weather A Sign Of Climate Change?
http://notalotofpeopleknowthat.wordpress.com/2014/01/06/is-englands-bad-weather-a-sign-of-climate-change/

All you ever wanted to know about global temperatures over the ages. Getting things into perspective:
http://www.climate4you.com/GlobalTemperatures.htm#An%20overview%20to%20get%20things%20into%20perspective

Dr Patrick Michaels is a Senior Fellow at the Cato Institute in Washington D.C., and formerly a professor at the University of Virginia. He’s the author of many important books on climate change, including Meltdown: The Predictable Distortion of Global Warming by Scientists, Politicians, and the Media and Climate of Extremes: Global Warming Science They Don't Want You to Know which he co-authored.

To read his comments on green energy follies see:
http://www.cato.org/publications/commentary/governments-big-energy-folly

No Global Warming for 17 years 8 months 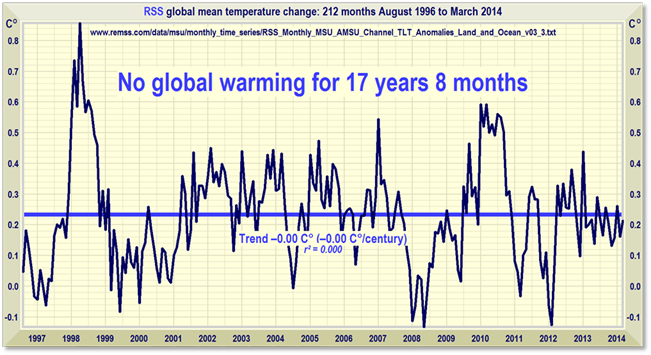 
Believe it or Not