The Global Warming Nazis are getting even more extreme. 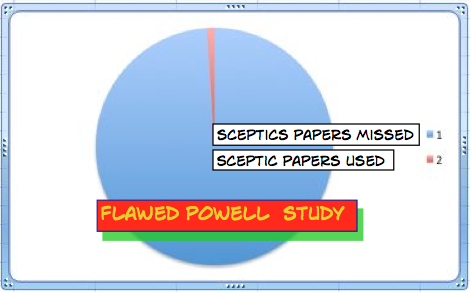 Geochemist James Lawrence Powell continues to claim, the only people still debating whether or not climate change is “real,” and caused by human activity, are the ones who aren’t doing the actual research.

Well, I can tell Mr Powell that climate does change and has changed through all eternity so, to answer his first leg, "YES!" Climate Change is "real."

Is Climate Change caused by human activity. Well, also a qualified "YES!" The question Powell should ask is - "Are Humans' emissions of carbon dioxide causing catastrophic global warming?" As there has been no significant warming for more than 17 years, the answer to this must be "NO!"

Powell claims that he went through "every scientific study published in a peer-review journal during the calendar year 2013." This blog before has answered and destroyed these outlandish claims and found them all lacking substance:

To check that he was on the right track, he could have done a check with the NIPCC. The NIPCC ("Nongovernmental International Panel on Climate Change")  is an international panel of nongovernment scientists and scholars who have come together to understand the causes and consequences of climate change from a sceptical viewpoint, looking at information which is routinely ignored by the official U.N. body, the IPCC.

The NIPCC regularly reviewing the peer-reviews scientific literature and archives those reviews on their website.

Geochemist James Lawrence Powell says: "the only people still debating whether or not climate change is “real,” and caused by human activity, are the ones who aren’t doing the actual research."

If you look at the names behind the NIPCC ( they are found here) all are scientists who have done research and most if not all have published papers.

Were their papers included in Powell's "every scientific study published in a peer-review journal ..."