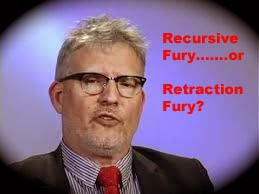 The on again/off again fortunes of Stephan Lewandowsky and his partners in slime, John Cook, Klaus Oberauer, and Professional Librarian Michael Marriott.

It appeared and then disappeared, re-appeared but has finally been retracted.


In the light of a small number of complaints received following publication of the original research article cited above, Frontiers carried out a detailed investigation of the academic, ethical and legal aspects of the work. This investigation did not identify any issues with the academic and ethical aspects of the study. It did, however, determine that the legal context is insufficiently clear and therefore Frontiers wishes to retract the published article. The authors understand this decision, while they stand by their article and regret the limitations on academic freedom which can be caused by legal factors.

It’s not clear to us what “the legal context is insufficiently clear” means, but in his blog post published today, Lewandowsky writes:

In other words, the article is fine but Frontiers does not want to take the legal risk that its restoration on the website might entail.
This is not the first time that legal fears have led to the withdrawal of a paper.
The authors were involved in drafting the retraction statement and sanction its content: Weunderstand the journal’s position even though we do not agree with it.

Lewandowsky explains more of the background to the paper in this video.
Meanwhile, the paper still appears on the site of Lewandowsky’s former institution, the University of Western Australia, with the following notice on top:

The United States Congress passed a law in 2010 that recognized the adverse impact of foreign libel laws on the “ability of scholars and journalists to publish their work” (PUBLIC LAW 111-223). This law made judgments under English libel laws unenforceable in the United States.
This article was published on 18 March 2013 as Lewandowsky, S., Cook, J., Oberaucr, K., & Marriott. M. (2013). Recursive fury: Conspiracist ideation in the blogosphere in response to research on conspiracist ideation. Frontiers of Psychology, 4 (73). doi:10.3389/fpsyg.2013.00073.
The article attracted nearly 30,000 abstract views and 10,000 full-text views. It also attracted a number of complaints which were investigated by the publisher. The investigation did not identify any issues with the academc and ethical aspects of the study. It did. however, determine that the legal context was insufficiently dear for Frontiers to retract the published article. The retraction statement can be found here:http://journal.frontiersin.org/Journal/10.3389/fpsyg.2013.00073/abstract
The article is now hosted on a website of the University of Western Australia, which has come to a different assessment of the risk posed by this article and reaffirms its commitment to academic freedom. Further details about the history of this article and continued attempts to suppress inconvenient science can be found at sks.to/rf.

The release of the news about the retraction has been a messy affair, with a Google cache version of an “embargoed” post about the situation circulating on the web yesterday, and then the story apparentlybreaking on climate skeptic blog Watts Up With That.

The DeSmogBlog has more details, including documents obtained through a Freedom of Information Act request showing “that climate sceptics complained that the work was defamatory.”