Larry Bell, writing for his new home NEWSMAX pens a piece under the above headline.

First Bell mentions Patrick Moore, Greenpeace co-founder who quit the activist environmental organisation in 1986 when they were moving away from science and toward the communist movement - See:


No scientific proof humans are dominant cause of warming climate

At the same time, the collapse of World Communism and the fall of the Berlin Wall led to the environmental movement being hijacked by the political and social activists who learned to use green language to cloak agendas that had more to do with anticapitalism and antiglobalization than with science or ecology.


There is no scientific proof that human emissions of carbon dioxide are the dominant cause of the minor warming of the Earth's atmosphere over the past 100 years.

Perhaps the simplest way to expose the fallacy of extreme certainty is to look at the historical record. When modern life evolved over 500 million years ago, CO2 was more than 10 times higher than today, yet life flourished at this time. Then an ice age occurred 450 million years ago when carbon dioxide was 10 times higher than today. (bold added)

Larry Bell moves on to Dr. Fritz Vahrenholt, a prominent Socialist and a father of Germany’s environmental movement.

Upon discovering and pointing out numerous factual inaccuracies to IPCC officials, they simply brushed them aside. Stunned by this, he began to wonder if IPCC reports on climate change were similarly sloppy. After digging into the IPCC’s climate report he was horrified to find similar incompetency and misrepresentations, including climate models that were fudged to produce exaggerated temperature increases. (bold added)

Then Vahrenholt hits out with his King Hit.


“The facts need to be discussed sensibly and scientifically, without first deciding on the results.” (bold added)

Larry Bell then discusses the re-inventor of the GAIA religion, James Lovelock, whose about turn was discussed HERE and HERE.

This blog has written much of Dr Giaever including his resignation from the American Physical Society and his inclusion in 50 former IPCC experts who have seen the light.


Nobel Laureate physicist Dr. Ivar Giaever has referred to global warming ideology as a “pseudoscience” that begins with an emotionally-appealing hypothesis, and “then only looks for items which appear to support it,” while ignoring ample contrary evidence.

Bell's conclusion hits the nail on the head:

Tragically, that pseudoscience does greatest injustice to those who can least afford it.

Climate science began with philosophical writings in India around 3000 B.C. and writings on oracle bones from the Shang Dynasty in China 2000 BC. In 350 BC Aristotle described the hydrologic cycle in his book, Meteorology and the Greek scientist Theophrastus compiled a book on weather forecasting, called the Book of Signs.

Measurement instruments such as rain and wind gauges, barometer, thermometer, hygrometer were added over the years. Networks of weather observations were set up in Italy as early as 1654. Joseph Henry at the Smithsonian Institute in the USA set up a United States network in 1849.


His protégé Robert FitzRoy was appointed in 1854 as chief of a new department within the Board of Trade to collect weather data at sea from ship captains using loaned tested instruments.

The first daily weather forecast in the “Times” appeared in 1860. The following year a system was introduced of hoisting storm warning cones at principal ports when a gale was expected. Fitzroy invented a barometer which still occasionally turns up on the Antiques Roadshow.

Meteorological Offices and weather stations were established all over the world. Observations were exchanged using the electric telegraph.

The first professional meteorologist to obtain a university post was Sir George Simpson, who was appointed lecturer in the University of Manchester in 1905. He accompanied Captain R F Scott expedition to the South Pole in 1910-13 and he was Director of the British Meteorological Office from 1920 to 1938.

The quantity of climate observations became so large that it was only with the advent of the computer in the 1950s that they could be organised into semi empirical models to provide a reliable forecasting service.

The climate depends on the behaviour of fluids, of the atmosphere and of the oceans. There is currently no comprehensive theoretical physics of fluids and the best that can be done involves the use of non linear equations with second order differential quantities.

showed that if this method is applied to the climate a very slight error in the boundary conditions (for example, the movement of a butterfly’s wing) would be escalated by the equations, making a long term forecast impossible. Lorenz concluded that for the climate the prediction of the sufficiently distant future is impossible by any method.

Meteorologists use a variety of computer services from all over the world and compile numerical models at several different levels of complexity for different purposes. Some of these are free on the internet, others may be sold commercially.
.
Modern weather forecasting involves a combination of computer models, observations, and knowledge of trends and patterns. Using these methods, reasonably accurate forecasts can be made, up to about five days in advance. Beyond that, detailed forecasts are less useful, since atmospheric conditions such as temperature and wind direction are very complex.

They give a very useful summary of previous studies. They say


The present limit of deterministic weather predictability is a few weeks at most (Hoskins and Sardeshmukh 1987; Ripley 1988). The major limiting factors are incomplete knowledge of the atmosphere’ s initial state (Gilchrist1986) and imperfect understanding of atmosheric processes (Somerville 1987). The first factor is most important at short lead times while modelling errors become the dominant limitation in longer forecasts (Anthes and Baumhefner 1984).

Their own study covers the entire Canadian system for the year 2000. They say


In this analysis, we assess the accuracy of short- and medium-range forecasts of minimum and maximum temperatures and precipitation for lead times of 1 to 5 days, issued daily by the Meteorological Service of Canada (MSC, formerly the Atmospheric Environment Service) for selected cities during 2000.

Their detailed results are tabulated They found that temperature forecasts had a bias of about ±1ºC and were rarely better than ±2ºC.

The results are plotted in the following graphs:

The British Met Office at http://www.metoffice.gov.uk/about-us/who/accuracy/forecasts comes to a similar conclusion. They say:

CONCLUSION
Climate is essentially local. Numerical climate models have to be supplemented with specific local characteristics to provide a reliable local forecast. The Global Climate is an array of the climate properties at each individual locality, as influenced by more general features. It is portrayed to us every day by the TV weather forecasts.

An example may be viewed at http://www.youtube.com/watch?v=irXZqRwUQeY

Since Global climate properties have to be obtained at present from an assembly of individual local determinations there is no possibility of a plausible global climate model which could be capable of taking these into account.

The best forecasting accuracy for maximum and minimum temperature for each locality is rarely better than a couple of degrees Celsius for a few weeks ahead at most. Global climate properties could not possibly be more accurate or further into the future than this.

Any scientific organisation or individual scientist who claims the ability to predict the temperature change of the local or global climate beyond a few weeks, even to decimals of a degree, has to be dismissed as deluded or even fraudulent.

A peer-reviewed paper published in Remote Sensing5 by Ichii et al showed that, over the last 30 years vegetation has increased in Asia as atmospheric Carbon Dioxide, plant fertiliser has increased. (Link) 40% of the area has experienced a significant increase in vegetation.


Abstract: Past changes in gross primary productivity (GPP) were assessed using historical satellite observations based on the Normalized Difference Vegetation Index (NDVI) from the Advanced Very High Resolution Radiometer (AVHRR) onboard the National Oceanic and Atmospheric Administration (NOAA) satellite series and four terrestrial biosphere models to identify the trends and driving mechanisms related to GPP and NDVI in Asia. A satellite-based time-series data analysis showed that approximately 40% of the area has experienced a significant increase in the NDVI, while only a few areas have experienced a significant decreasing trend over the last 30 years. The increases in the NDVI are dominant in the sub-continental regions of Siberia, East Asia, and India. Simulations using the terrestrial biosphere models also showed significant increases in GPP, similar to the results for the NDVI, in boreal and temperate regions. A modeled sensitivity analysis showed that the increases in GPP are explained by increased temperature and precipitation in Siberia. Precipitation, solar radiation and CO2 fertilization are important factors in the tropical regions. However, the relative contributions of each factor to GPP changes are different among the models. (bold added)
Ichii, K., Kondo, M., Okabe, Y., Ueyama, M., Kobayashi, H., Lee, S.-J., Saigusa, N., Zhu, Z. and Myneni, R.B. 2013. Recent changes in terrestrial gross primary productivity in Asia from 1982 to 2011. Remote Sensing5: 6043-6062.
The Idso's CO2 Science sees it this way:
What it means
As the atmosphere's CO2 concentration continues to rise - thanks to the CO2 emissions of people the world over - Earth's terrestrial plants are photosynthesizing at ever greater rates while using water ever more efficiently, which phenomena are leading to a great Greening of the Earth that is literally transforming the planet - for the better - right before our eyes. 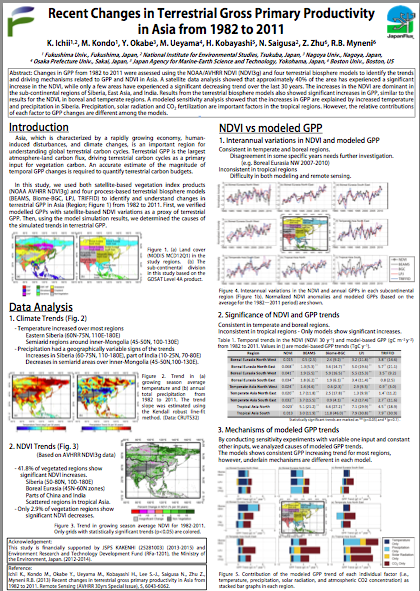