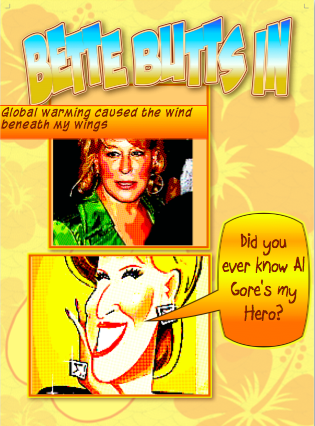 Bette Midler is a twitterer, a celebrity twitterer.

"Never wear crocs unless you are a chef or a gardener."

Her response to "Seeger was a communist piece of sh!t. I hope his death was painful. You're also a scumbag leftist and a huge c^nt."

Then there are her tweets about (man-made) global warming:

Global warming? OK, It is winter in December in New York, but 70ºF (21ºC) would be very pleasant. So one wonders what were the New York temperatures like in 2013. Weatherspark.com reports:

The average for December was 5ºC!  A couple of hot days and the Divining Miss M  yells global warming. (Note to the Climate Council - here's a recruit for you.) The amazing thing is, she made a similar claim a year earlier, but then she admitted that it was an UNSEASONABLY warm day.

Midler, in the Middler of last year was on it again:

Now, most of the US is experiencing very cold conditions: (Link)

Fountains froze over, a 200-foot Ferris wheel in Atlanta shut down, and Southerners had to dig out winter coats, hats and gloves they almost never have to use.

The brutal polar air that has made the Midwest shiver over the past few days spread to the East and the Deep South on Tuesday, shattering records that in some cases had stood for more than a century.

The mercury plunged into the single digits and teens from Boston and New York to Atlanta, Birmingham, Nashville and Little Rock — places where many people don't know the first thing about extreme cold.

"I didn't think the South got this cold," said Marty Williams, a homeless man, originally from Chicago, who took shelter at a church in Atlanta, where it hit a record low of 6 degrees. "That was the main reason for me to come down from up North, from the cold, to get away from all that stuff."

So,  the Meddling Miss M who, one short  month ago was advocating officials address global warming, now calls this cold  "climate change."