Climate Change Denial? It's them, not us. 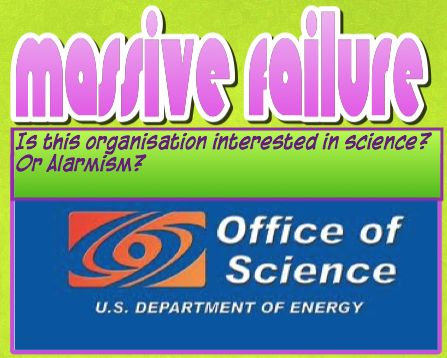 Jerry W. Elwood - retired director of the Climate Change Research Division in the U.S Department of Energy’s Office of Science

has written an opinion piece for Daily Interlake.Com.

He commences by talking of what he calls "two myths."


One is that human-caused global warming is still an open and controversial scientific question, when in fact, it is not. The second is that science on any subject can ever be “settled” in the sense that all uncertainties about every detail can be eliminated, which is both an unrealistic and unreasonable expectation that no area of science can ever expect to meet.

Elwood seems to think that the question is closed.


Just because some people disagree with a conclusion that is based on an overwhelming weight of evidence does not mean the science is unsettled. The fact is that almost all climate scientists with expertise and experience on the subject believe, based on the weight of evidence, that global warming observed over the past 60 years is caused largely by humans.

There are problems with this paragraph:

the heat content of the atmosphere, ocean, and land is increasing, why glaciers are retreating almost everywhere in the world, why sea level is rising, why the mass of the Greenland and Antarctic ice sheets is declining, and why the minimum extent of Arctic sea is declining.

Do these people look at any of the data or do they just look at climate models?

Are Glaciers Retreating? Well, as we are still recovering from the dark depths of the Little Ice Age (LIA) we can expect some to be retreating however here's a (partial) list of the
specific glaciers that are growing, eg

Sorry, Mr Elwood. This is an unscientific statement.


If it is settled it is not science and if it is science it is not settled.

Really? Believe is a religious term. Scientists use data and observation, not belief.

Global Warming Observed over the Past 60 Years.

Er....What was caused by humans? Was it the warming or the cooling that the humans caused? Can you give any evidence that humans have caused the warming?


The fact is that climate models predict the observed increase in global average temperatures since 1951 only if human-caused climate forcing is included in the models. 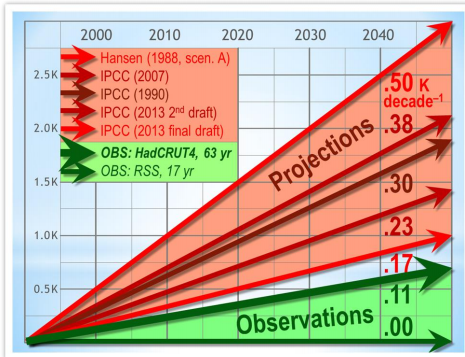 SO the real world data show the failure of Mr Elwood's climate models. Why then would he add:


Myerowitz ignores the fact that his claims are refuted by an extensive body of observational data and evidence....

Whhoahh! WHO is ignoring the real world data?

Elwood also makes several other false assertions, peddling them as evidence that the climate is warming and that CO2 causes global warming.  The catastrophic anthropogenic global warming (CAGW) hypothesis has been falsified, Mr Elwood. 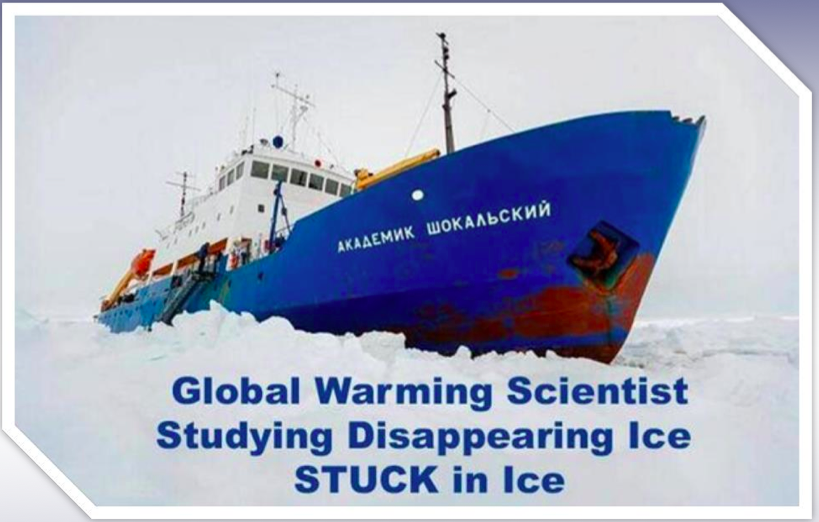 Perhaps the characters from the University of NSW should have read Journal of Geophysical Research: Atmospheres 118: 5105-5110 in June 2013 before taking off on their Summer Holiday.

From the Abstract: (my emphasis)


In contrast to Arctic sea ice, average Antarctic sea ice area is not retreating but has slowly increased since satellite measurements began in 1979. While most climate models from the Coupled Model Intercomparison Project Phase 5 (CMIP5) archive simulate a decrease in Antarctic sea ice area over the recent past, whether these models can be dismissed as being wrong depends on more than just the sign of change compared to observations. We show that internal sea ice variability is large in the Antarctic region, and both the observed and modeled trends may represent natural variations along with external forcing. While several models show a negative trend, only a few of them actually show a trend that is significant compared to their internal variability on the time scales of available observational data. Furthermore, the ability of the models to simulate the mean state of sea ice is also important. The representations of Antarctic sea ice in CMIP5 models have not improved compared to CMIP3 and show an unrealistic spread in the mean state that may influence future sea ice behavior. Finally, Antarctic climate and sea ice area will be affected not only by ocean and air temperature changes but also by changes in the winds. The majority of the CMIP5 models simulate a shift that is too weak compared to observations. Thus, this study identifies several foci for consideration in evaluating and improving the modeling of climate and climate change in the Antarctic region.


If Prof Chris Turney had used real world data instead of climate models, he and his team might not have set off on a wild goose chase.

What it means
It is difficult for a climate model to be more wrong than when it hind-casts just the opposite of what has been observed to be happening over the past three and a half decades in the real world, which is what most of the CMIP5 models apparently do. 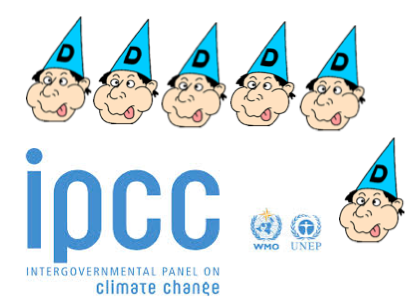 The Lord Monckton Foundation has circulated a new paper (link pdf) by Christopher Monckton of Brenchley which begins:

You couldn’t make it up. A Russian “Antarctic research vessel” carrying not diligent scientific researchers but 74 taxpayer-funded climate extremists on a junket to help them make up headlines about sea ice melting because of “global warming” finds itself stuck in – er – sea ice. And sea ice in high summer at that. The extremists, as so often happens, had believed their own propaganda. They had believed Al Gore. They had believed, poor saps, that Antarctica was warming and melting. It isn’t.

An interesting sideline, this Icecapade has merited derision and condemnation from around the world. For instance, from France for example:

Under these conditions and based on the synopsis of the expedition, as well as the accounts of the more than festive ambiance on board, one is entitled to wonder about the real scientific character of this adventure. An obvious amateurism...obstinacy and naivety.


Aside from the Antarctic Peninsula (just 2% of the continent), which has an anomalous climate, Antarctica has been cooling since satellite records began, and sea-ice extent there has been growing. Even at midsummer, Komrade Kaptain. 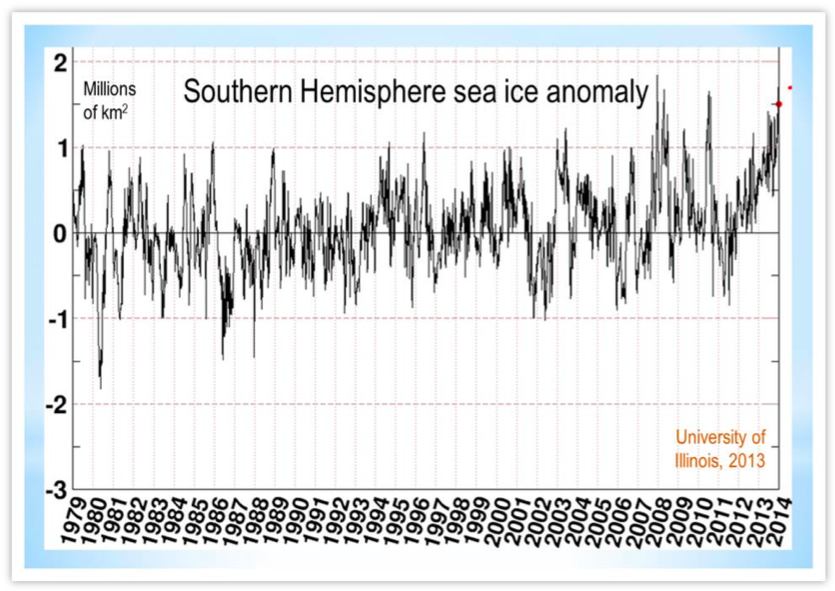 Taking the Arctic and the Antarctic together, neither the magnitude nor the trend in global sea ice has changed all that much in a third of a century.

So what is going on?

Unnoticed, the IPCC has slashed its global-warming predictions, implicitly rejecting the models on which it once so heavily and imprudently relied. In the second draft of the Fifth Assessment Report it had broadly agreed with the models that the world will warm by 0.4 to 1.0 C° from 2016-2035 against 1986-2005. But in the final draft it quietly cut the 30-year projection to 0.3- 0.7 C°, saying the warming is more likely to be at the lower end of the range [equivalent to about 0.4 C° over 30 years]. If that rate continued till 2100, global warming this century could be as little as 1.3 C°. 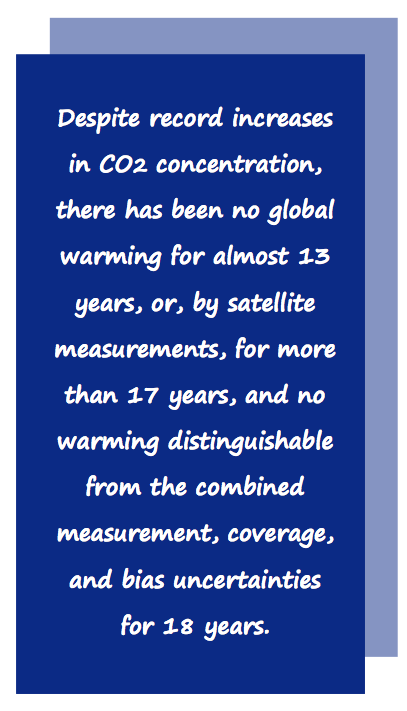 Lord Monckton reveals how the IPCC has been quietly juggling figures.


Meanwhile, Uni of NSW's @ProfChrisTurney, the Gift that keeps giving: 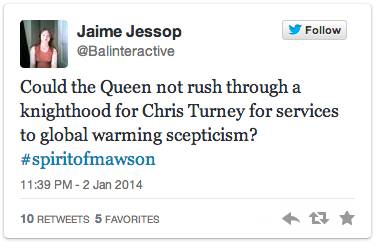