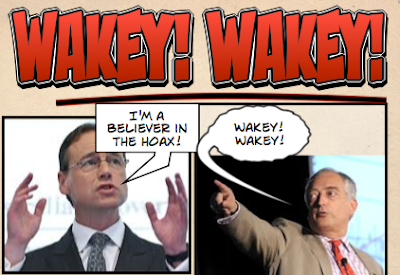 Your stock letter of 6 December 2013 to Warren Truss, who had written to you on behalf of Mr. Case Smit, a constituent of his, has been widely circulated because the inaccuracies and fatuities it contains raise grave questions about the Government’s competence (and, indeed, sanity) in environmental matters. For this reason, a copy of this letter goes to the Prime Minister.

The object of this reply, which will also be widely circulated, is to correct the errors, expose the fatuities, and ask you some questions about what you have written.

You say you “accept the science of climate change” (whatever that pietistic but Sibylline utterance may mean). Yet the various supposed authorities you cite, such as the CSIRO, the Royal Society and the IPCC, are not peer-reviewed papers in learned journals: they are institutions and pressure-groups with a direct and very large financial vested interest in maintaining an exaggerated account of events.

A peer-reviewed survey of 11,944 papers on climate published in learned journals since 1991, conducted by campaigners at the University of Queensland in the spring of 2013, flagged just 64 papers, or 0.5% of the total, as endorsing the IPCC’s position that most of the warming since 1950 is manmade. They inflated this 0.5% to 97.1% by the dubious methods that you and other peddlers of this silly scare seem fond of, but they are now facing enquiries about research misconduct. (link)

From this survey, you will deduce that the position of the various profiteers of doom on which you rely is now startlingly at variance with the reviewed scientific literature.

You say, “Most nations of the world have agreed that a global temperature rise beyond 2 Cº relative to pre-industrial poses unacceptably high risks to communities, economies and natural ecosystems.” Perhaps you would be kind enough to let me know what is the ideal global mean surface temperature, and refer me to any evidence you may have to the effect that papers published after peer review in the learned journals support your chosen global mean surface temperature.

Please do not refer me to papers that say 2 Cº of global warming will be dangerous, unless those papers also say what is the ideal global mean surface temperature: for unless an ideal temperature has been established as a reference point, there is simply no legitimate scientific basis for saying that n Cº of warming will be dangerous. In a recent cold winter in the UK, there were 31,000 excess deaths. It may well be that 2 or 3 Cº of global warming would prove net-beneficial – not that we are likely to cause any such increase in the next century or two.

You say, “We are already observing changes to our climate system including rising temperatures”.

You say there are “more extreme events such as heatwaves”. But how can you rationally blame “heatwaves” on global warming that has not occurred for 17 years 4 months?

Furthermore, the IPCC – which you had previously cited as an authority – disagrees with you about extreme events. It produced a report on them in 2012, saying there was little evidence that such little warming as has occurred since 1950 has caused an increase in extreme events. And its Fifth Assessment Report, for which I was an expert reviewer, repeats the same message time again.

Here, too, you are out of line even with the dubious international racketeers on whom you rely for what you call “science”.

You say there is evidence of “increasing acidity of the oceans”. Please let me know of any global program of measurement of ocean pH of sufficient resolution to establish that it has fallen below 7.0 (a neutral acid-base balance). My own information is that there is no sufficiently resolved program of measurements capable of telling us whether there has been any change at all in the acid-base balance of the oceans, which appears to fall on the interval [7.8, 8.2], making the oceans pronouncedly alkaline, indicating yet again that your opinion is markedly at variance with science.

For comparison, rainwater is pronouncedly acid, with a pH of 5.4. Perhaps you would let me know of your proposals to prevent rainfall over the world’s oceans, and to prevent discharge of rainwater from rivers to the sea. As you know, the Brisbane River occasionally floods, discharging vast quantities of acid rainwater into the ocean directly adjacent to the Great Barrier Reef. Yet the Reef seems to be thriving (though it is of course greatly in the financial interest of the now-superfluous Barrier Reef Authority to pretend otherwise).

You say, “The speed and extent of further climate change depends on how much more carbon dioxide and other greenhouse gases we emit into the atmosphere from today.” To test this on-its-face fatuous proposition, I determined the least-squares linear-regression trend on the HadCRUT4 monthly global mean surface temperature data (Morice et al., 2012), for two successive 60-year periods (taking 60-year periods cancels any distortion caused by the warming and cooling phases of the naturally-occurring Pacific Decadal Oscillation).

You say, “Emissions [of CO2] are currently tracking the top of IPCC scenarios and heading towards an atmospheric concentration of carbon dioxide of 936 ppm by the end of the century.”

However, the IPCC’s own mid-range estimate, taken as the average of all six emissions scenarios in its Fourth Assessment Report, is that on business as usual the CO2 concentration will reach little more than 700 micro-atmospheres (the correct SI unit of measurement), not the 936 you mention. Who is supplying you with your information? It seems to be at variance with the science at almost every point. 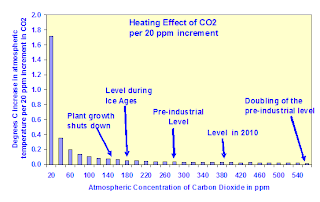 However, the IPCC’s Fifth Assessment Report projects global warming at 0.4 [0.3, 0.7] Cº over the next 30 years, equivalent to 1.33 [1.0, 2.33] Cº/century. Perhaps you would care to sketch out the scientific basis, if any, for the notion that the IPCC’s now much reduced projection of the global warming rate over the next four decades will suddenly triple in the second half of the century. It will not be enough for you to suggest that CO2 concentration is expected to rise rapidly over the latter half of the century, for even if that were to be the case the warming effect of CO2 is logarithmic, so that each additional molecule has less warming effect than its predecessors. Again, you are adrift on the elementary science.

Science is not best done by such pressure groups. It is done by reviewed studies in the learned journals: and, as I have said, those studies do not provide evidence for your jejune catastrophism. You are at odds with the overwhelming preponderance of the literature, which is commendably silent on the question whether more than half of the global warming since 1950 was manmade. If less than half was manmade, then on any view we are not causing a climate crisis, and we are manifestly not going to cause one either.

Why not ask your “experts” to tell you by how much global temperatures have fluctuated over, say, the past 420,000 years? You will find that notwithstanding changes in solar output, meteorites, super-volcanoes, interstellar dust clouds and other major events the world’s mean absolute surface temperature has varied by little more than 1% either side of the long-run median. So, answer me this. Just how likely is it that our transmuting 1/3000 of the atmosphere from oxygen to plant food in 100 years is likely to cause almost that much increase in a century? Come off it, Minister!

You say, “Ten cm of sea level rise can result in high sea level events occurring two to six times more often.” But what evidence do you have that sea level is rising at anything like that rate? The Aviso Envisat satellite, during the eight years of its operation, showed sea level rising at a rate equivalent to 3 cm per century. The GRACE gravitational-anomaly satellites show sea level falling. The notion that sea level is rising rapidly is not borne out by the raw data. It is only after various deliberate tamperings that sea level has been shown to rise. Besides, since there has been no global warming for 17 years 4 months, why would sea level have risen? The answer, of course, is that it has not, but that it is profitable to some to pretend that it has.

You say, “There are also assets, such as the Great Barrier Reef, that will be impacted at temperature increases of 2 Cº or less.” As far as I understand matters, the corals have been with us for at least 175 million years. One need only go back to each of the four previous interglacial warm periods to find global temperatures warmer than the present, yet here the corals are. And, profitable though it is for the Barrier Reef Authority to whine, its own record of sea temperature in the region of the reef shows no trend throughout. Yet again, your information is markedly at odds with the real-world data.

You say, “The Government's Direct Action Plan will deliver real emissions reductions at the lowest cost and with tangible benefits that improve Australia's environment and protect our economic competitiveness.” Please let me see an inter-temporal investment appraisal that compares the cost of making global warming go away by worldwide measures of equivalent unit cost to your Action Plan with the later and far lesser cost of adapting to such global warming as may occur. When I conducted a peer-reviewed appraisal of the late Australian carbon tax, I found that similar measures adopted worldwide would be 50 times costlier than simply letting global warming happen and adapting to its net-adverse consequences. I have little reason to suppose that the Direct Action Plan will fare much better, and nor – I suspect – have you.

You say, “The Government is committed to the 20 per cent Renewable Energy Target”. But why? So-called “renewable” energy is enormously destructive and as enormously expensive. Worse, according to studies in the UK it does not actually reduce CO2 emissions at all. It is spectacularly pointless.

Finally, you burble about the “One Million Solar Roofs, Solar Towns and Solar Schools programmes”. I have recently conducted an investment appraisal of subsidies for solar panels in the UK. Results show that solar panels are 30 times more expensive than adapting to global warming, and that is before one takes due account of their short lifespan and the considerable pollution caused by their manufacture and disposal, to say nothing of the tragic opportunity loss caused by the diversion of funds towards pointless, damaging boondoggles such as this.

I do hope that in future you will raise your game on the science and economics of the climate issue. You will understand the damage you cause to your Government’s credibility when you pack so much manifestly anti-scientific nonsense into one short letter. The pedlars of the global warming scare will go down in history either as gravely wicked or as monumentally stupid or both. You may like to do a little more research before you ever again write a letter as careless as that which you have sent to the Deputy Prime Minister in reply to his constituent’s legitimate concerns. Oh, and the constituent’s surname is Smit, not Case.

Monckton of Brenchley
Posted by Geoff on January 05, 2014 4 comments: