Just before he embarks on his Down-under tour (See tour schedule HERE) , Patrick Moore has labelled the body he co-founded - Greenpeace - as evil and guilty of losing its humanitarian roots. 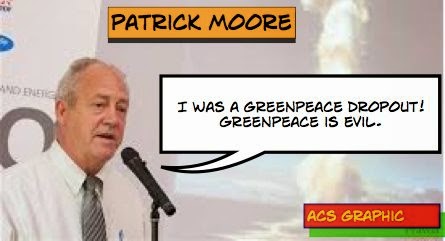 His attack on the organisation he helped create comes as former Environment Secretary Owen Paterson campaigns against the 'self-serving' and 'highly-paid' network of environmental pressure groups he calls the 'green blob'.  (LINK)

Dr Moore told BBC Radio 4's Today Programme: 'My problem with Greenpeace is they have lost any humanitarian roots they had.

'When we started Greenpeace it was to stop nuclear war and the destruction of human civilisation, that of course is the "peace" in Greenpeace.

'The "green" is the environment and that's good as well, but they lost the concerns for humans... They have turned, basically, into an evil organisation.'