A small but significant battle win in the war against the AGW hoax. 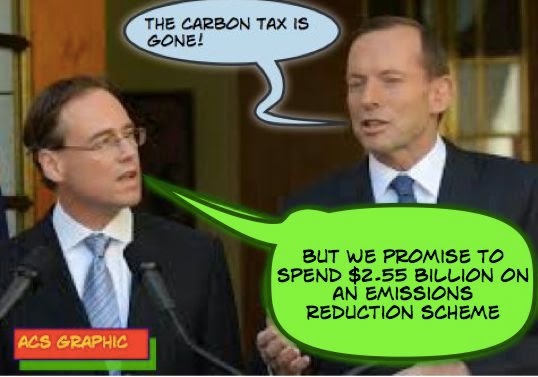 Headlines from around the world are noting the Abbott Government's win in reversing the useless economy destroying carbon dioxide tax; some looking on with praise but more with disdain, eg


Today's reversal of our carbon laws represents a tragedy for our politics, a travesty for public policy and a train wreck for climate action. (link)

The simple facts are that

Even so, the Abbott Government still pays obeisance to the AGW hoax. There are true believers of AGW in Abbott's front bench, the Minister for the Environment Greg Hunt included.

TONY JONES:Okay. Let's move on. With no carbon price in place from today and no Direct Action policy, is any company in Australia now free to put as much carbon pollution into the atmosphere as they wish, with no penalty or any way of stopping them?

GREG HUNT:Well, of course, under Labor's carbon tax there was no constraint on individual companies. They could simply pay to pollute. And, of course, the biggest problem with the carbon tax was that meant that the power companies could simply put out as many emissions as they want and pass on the cost to consumers.


Mr Hunt has budgeted for $2.55 Billion  for an emissions reduction scheme. (link)

Many say that PM Abbott does not believe in the hoax, but this week, after the carbon dioxide tax reversal he was quoted as saying: (link)


"So we are a conservationist government and we will do what we think is the sensible thing to try to bring emissions down."

As Viv Forbes wrote in the post Death by Delay: (link)


Unfortunately, the job is not nearly over. We still have the Green Energy subsidies and targets, far too many bureaucracies still white-anting away, too much being spent on climate-fests, global warming research, climate bureaucracies, Kyoto carbon credit forests and the silly “Direct Action” still breathes. Flannery and Gore will never give up, the Green/ALP coalition waits its chance, much of the media will maintain the rage . . . etc


So beware, all ye who celebrate the tax reversal win, it is but a small battle win in the war against the AGW hoax.