We are lectured monotonously about the “consensus” that carbon dioxide produced by human activities is “highly likely to cause dangerous global warming”. The alarmist computer models are all based on this assumption, with predicted warming multiplied by also assuming strong positive feedbacks.

A consensus of opinion never determines a scientific question – real proof depends on evidence and logic. Consensus is a tool of politics and a guidepost for lemmings.

The so-called “Greenhouse Effect” depends entirely on the known property of carbon dioxide gas to intercept radiant heat in certain wavelengths. This process starts operating as soon as the extra gas enters the atmosphere.

If this influence is strong enough to drive “dangerous global warming”, its effect should be noticeable even in the short term, with Earth’s surface temperature increasing in step with increasing carbon dioxide.

Carbon dioxide in the atmosphere has been steadily increasing for over a century, but global temperatures have fluctuated in broad cycles decades long, and the temperature trend has been flat for the last 17 years.

This evidence suggests that increasing carbon dioxide is not a major driver for dangerous global warming, no matter what the consensus says – even if a million people say a foolish thing, it is still a foolish thing.

We may still get natural global warming, as the vast restless oceans roll over or the solar cycles change, but man-made carbon dioxide is not driving these processes. Moreover, a bit of warming is not our greatest risk – history shows that ice ages extinguish more species and habitats than warm eras.

The consensus of alarmists is trying to lynch an innocent party.

If you would like to see what others have said about this article, or have a say yourself, see:
http://pickeringpost.com/story/evidence-trumps-the-phony-consensus/3371


For those who wish to read more:

No consensus on the Climate Consensus:
http://wattsupwiththat.com/2014/06/04/tol-takes-on-cooks-97-consensus-claim-with-a-re-analysis-showing-the-claim-is-unfounded/

Has the Climate Crusade reached its Waterloo?
http://www.weeklystandard.com/author/steven-f.-hayward 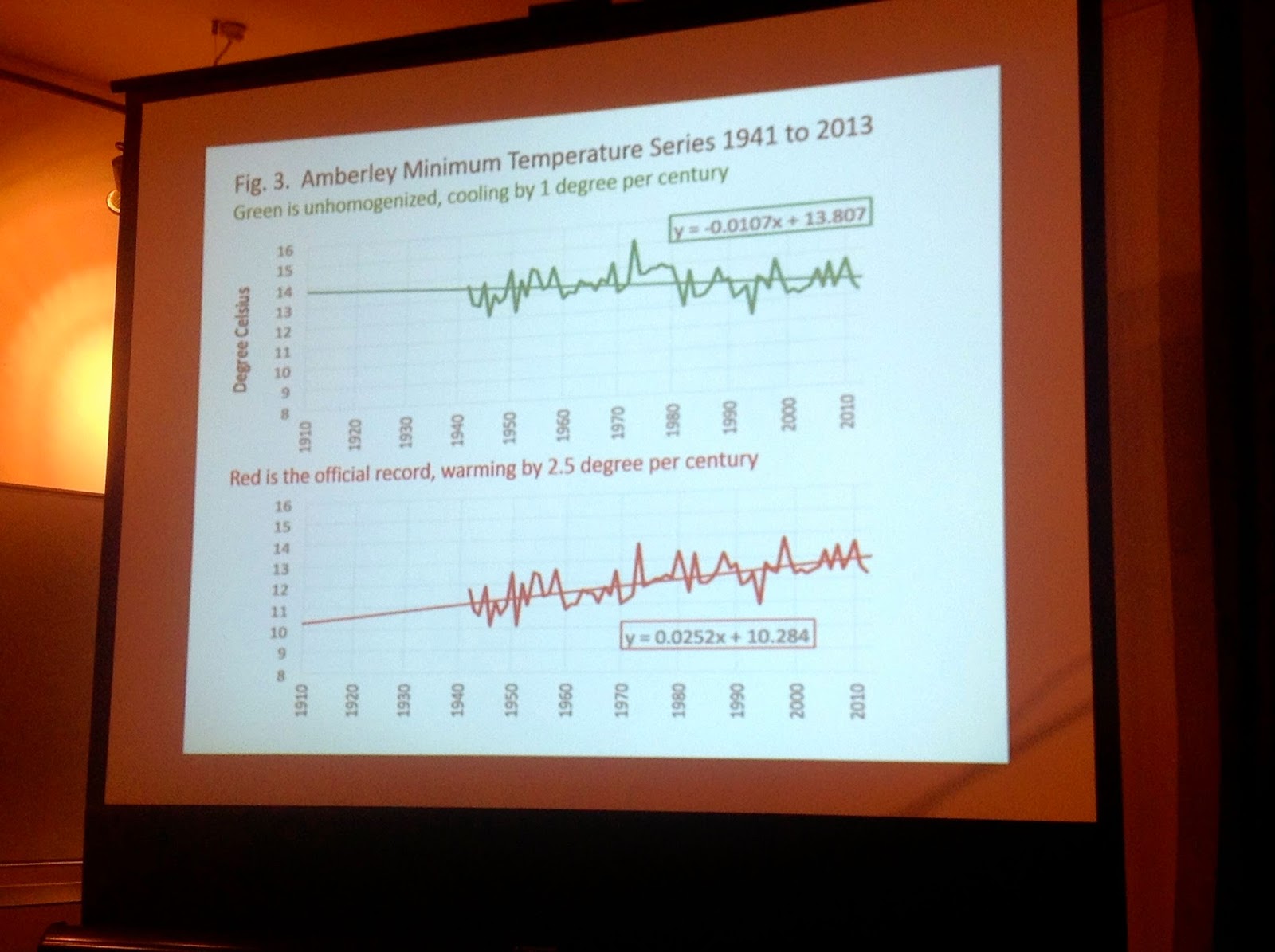 We live at Rosevale, just over the hills from the Amberley air base. We have just been subjected to retrospective global warming by the keepers of the Amberley temperature record - Australia’s Bureau of Meteorology.


Until 2012, our official temperature records showed we had been in a cooling trend since records started in 1941. In 2012, BOM “adjusted” the original records and, lo, now we are suffering a global warming trend.

See the story on:  http://jennifermarohasy.com/2014/05/corrupting-australias-temperature-record/ 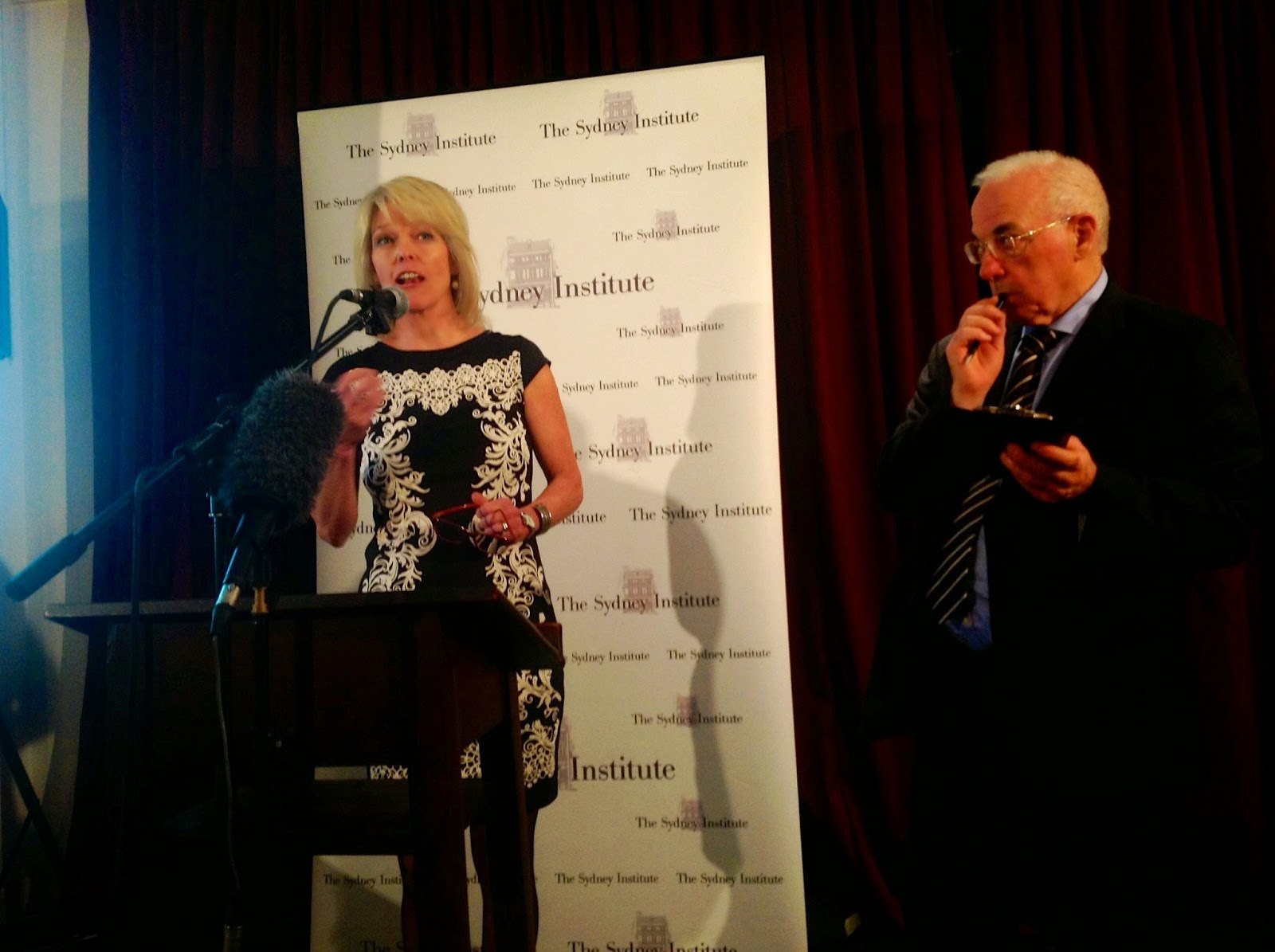 The BBC should give less airtime to climate sceptics
and its editors should seek special clearance to interview them.
Such interviews should be accompanied by health warnings.

Sea levels have been rising and falling without any help from humans for as long as Earth’s oceans have existed.

The fastest and most alarming sea changes to affect mankind occurred at the end of the Pleistocene Ice Age. Seas rose about 130m about 12,000 years ago, at times rising at five metres per century. Sea levels then fell as ice sheet and glaciers grew in the recent Little Ice Age – some Roman ports used during the Roman Warm Era are now far from the sea even though sea levels have recovered somewhat during the Modern Warm Era.

Many natural factors cause sea levels to rise - melting of land-based glaciers and ice sheets; warming and expansion in volume of the oceans; extraction of groundwater which ends up in the oceans; and sediments, sewerage, plant debris and volcanic ash washed into the oceans by rivers, storms and glaciers. In addition, tectonic forces cause some blocks of land to rise while others fall, hence the paradox of sea levels appearing to rise on one coastline while falling on another.

Currently the world’s oceans are rising at somewhere between zero and 3 mm per year, which has not changed much with the great industrialisation since 1945. Amongst all the factors moving the restless sea, man’s production of carbon dioxide is obviously an insignificant player.

Sea levels are always changing, at times very destructively. Waves move sea levels by a few metres and at places like Derby, WA, king tides can move sea levels by eleven metres. Then there are rogue waves up to 30 metres high which have sunk oil tankers, and tsunamis which can smash coastlines with a ten metre wall of water moving at over 800 km per hour.

Despite coping with all of the above, climate alarmists say we should be scared to death by the threat of seas rising gently at maybe a couple of mm PER YEAR. Even a slow-moving sloth could escape water rising at that rate.

King Canute showed his nobles that no man can hold back the rising sea. It’s time the climate alarmists learned Canute’s lesson and focussed on real world problems.

Even if we ceased using all carbon fuels for electricity and transport, no one could measure the effect of that huge sacrifice on global sea levels.


To see comments on this article (or make a comment yourself) see:
http://wattsupwiththat.com/2014/06/17/sea-levels-are-never-still/

Rising Seas are Nothing New:
http://carbon-sense.com/2013/11/30/nothing-new-about-climate-change/

Whenever climatists cannot answer a logical argument or a scientific fact they attack the messenger as being “in the pay of Big Coal or Big Oil”.

But Hollywood greens have been caught red handed preparing to accept millions of Arab Oil money to attack the big competitor of Arab oil – shale oil (and gas). Listen to them here:
http://www.cfact.org/2014/06/08/hollywoods-hydrocarbon-hypocrisy/


Farewell and a Tribute to Ray Evans.

Ray Evans has been my good friend, ally and adviser in many matters of public concern for about forty years. Ray was always generous with his time and sound in his advice and philosophies. We never had a disagreement in all of those years. Thank you Ray.

Ray was a founder and chief mover of the Lavoisier Society, and one of the first Australians to oppose Al Gore’s Global warming alarmism. His booklet “Nine Facts about Climate Change” is as true now as when he wrote it eight years ago.


The Last Word – Take a Trip to Las Vegas

If you are not already registered to attend the ninth International Climate Change Conference (ICCC-9) starting two weeks from tomorrow in Las Vegas, I suggest you check it out at: http://climateconference.heartland.org/.

At the conference you will have an opportunity to hear from, and meet, many of the world’s leading climate realists, scientists from around the world who question, not just the causes of climate change, but whether ‘man-made global warming’, if it occurs, will be harmful to plants, animals, or human welfare. You can also learn from top economists and policy experts about the real costs and futility of trying to stop climate change.