We often hear from the Global Warming Nazis that the Medieval Warm Period and the Little Ice Age were restricted to parts of the Northern Hemisphere. Eg the IPCC and some gobbledy-gook from UNSkeptic Science.

has put into question  part of the IPCC AR5:

"It follows that the statement of the latest report of the Intergovernmental Panel on Climate Change about the unprecedented nature of the current warming is unjustified."

Comparison with the climate of the past centuries has demonstrated until recently the unprecedented warming at the scale of the last millennium at least. This is embodied in the latest report of the Intergovernmental Panel on Climate Change. However, recently the studies have appeared putting this statement into question. A new 1000-year long reconstruction based on the tree-ring variations of the long-living Chinese junipers (Sabina Przewalskii Kom.) growing in the northeastern part of the Tibetan Plateau reveals that the climate during and immediately after the medieval maximum of solar activity was warmer that the present-day one, all subsequent cooling coincided with the periods of low solar activity, and the warming in the 1970s–1990s followed a new maximum of the solar activity which peak fell on the 1960s. 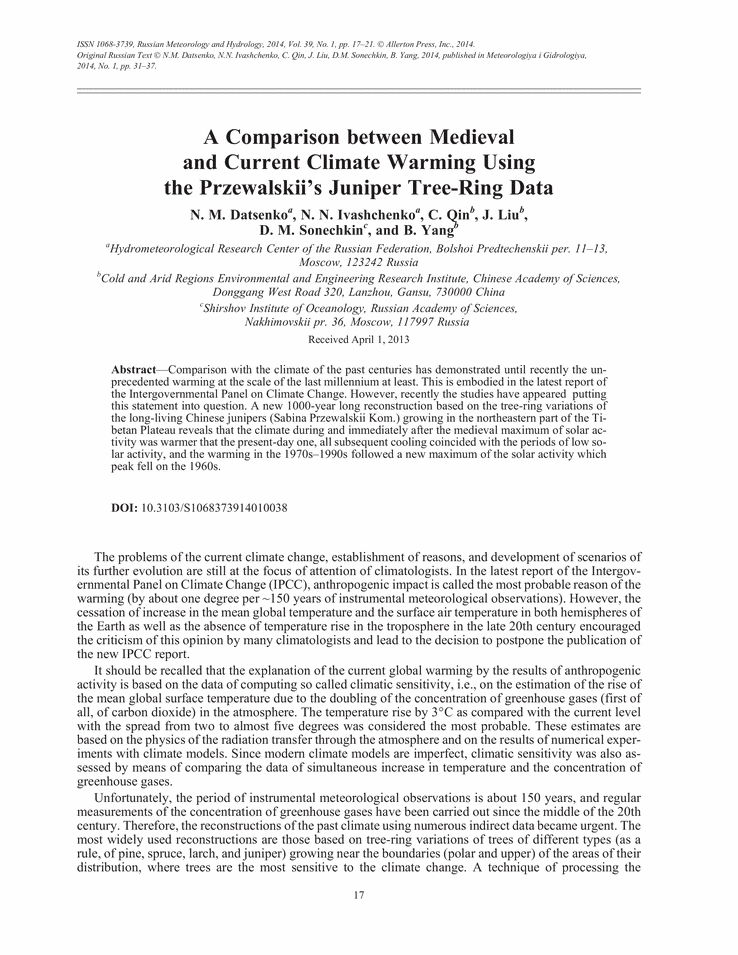 What was done
The six scientists - three Chinese and three Russian - developed a new 1000-year-long history of the temperature of the Northeastern Tibetan Plateau, based on a new method of analyzing very long tree-ring data that they developed and christened eigen analysis, which is described in detail in the studies of Yang et al. (2011a,b). This they did while working with Przewalskii juniper trees growing at a height of approximately 3000 meters in the mountainous region of China, many of which had been alive for over a full millennium.

What was learned
Datsenko et al. determined that "the climate during and immediately after the medieval maximum of solar activity was warmer than the present-day," and that all subsequent periods of cooling coincided with "periods of low solar activity." Furthermore, they note that S.G. Shiyatov, the most well-known Russian dendrochronologist, corroborates this viewpoint, in that the upper treeline history of the past millennium that he (Shiyatov, 2003) developed "corresponds well," as they describe it, "to the juniper growth reconstruction."

What it means
Put very bluntly, the Chinese/Russian research team states in their paper's concluding sentence that in regard to what they discovered, "it follows that the statement of the latest report of the Intergovernmental Panel on Climate Change about the unprecedented nature of the current warming is unjustified."