IPCC's latest (or is it a rehashed?) Alarmist Report.

Posted by Geoff on April 01, 2014
The IPCC has issued a new Alarmist Report; well, actually, as Professor Bob Carter says, it's the same old stuff re-hashed.

Remember the background to any comments, THERE HAS BEEN NO WARMING for more than 17 years. And perhaps that is why the Main Stream Media seems to be finally waking up to the hoax.

Take for example this quote from Fairfax's Sydney Morning Herald:


In the lobby of the Sydney aquarium where the Australian launch of the UN’s latest climate change report was released on Monday is a terrifying great white shark. The beast measures 7.5 metres long with a razor-toothed mouth so big it could easily swallow a human whole. It looks at least as big as the fibreglass monster used in the movie Jaws.
Thankfully, the aquarium shark is only a model. In real life, the biggest great white ever reliably measured was 6.4 metres. That’s still a whopper; the average mature specimen is four to five metres.

Why make a ridiculously outsized model for an aquarium? For effect, of course, to get the paying public in. Give ‘em a good scare.

Some of the authors of part of the latest climate report from the UN’s Intergovernmental Panel on Climate Change have done something similar:


“In short, human-driven climate change poses a great threat, unprecedented in type and scale, to well-being, health and perhaps even to human survival.”

Even Tom Arup, from the Age, realises that the Global Warming Nazis are losing the battle. He writes:


For decades the world's credible scientific institutions have been warning of the threats climate change poses to almost all facets of life on this planet. The latest assessment by the UN's Intergovernmental Panel on Climate Change is another full account of the problems we will cause with our continued tampering with the earth's climate by releasing large amounts of greenhouse gases.

I know, this does feel familiar doesn't it? You are a little bored, I can sense your eyes glazing over.

Darn right it is familiar. It is the same stuff from the IPCC with a little more shrill extremism added (eg change from High to Very High.)

Sky News notes that the IPCC panel is more cautious on Himalayan Ice:

The UN climate panel says Himalayan glaciers, whose melt-water is vital for hundreds of millions of people, could lose between half and two-thirds of their mass by 2100

The estimate by the Intergovernmental Panel on Climate Change (IPCC) revisits a blunder in its last overview that tarnished the group's reputation when it warned the glaciers could vanish by 2035.

Even so,  real journalists used to be suspicious and question everything. The Nongovernmental International Panel on Climate change would be the place for a thinking journalist (as opposed to a proganda-pushing pressman) to check the IPCC reports.

Joseph L. Bast is the President of The Heartland Institute and publisher of the  independent review of IPCC’s past and new reports "Climate Change Reconsidered" pans the latest IPCC report.


The final draft of the IPCC’s Summary for Policymakers identifies eight “reasons for concern” which media reports say will remain the focus of the final report. The NIPCC reports address each point too, also summarizing their authors’ positions in Summaries for Policymakers.

Read the repudiation of the IPCC's 8 point at Forbes.com (link).


"Global warming means more bushfires, worse droughts and severe heat waves. It is the biggest threat to our way of life that we face."


But Adam - No warming for 17 and a half years  even though C02 continues to rise! 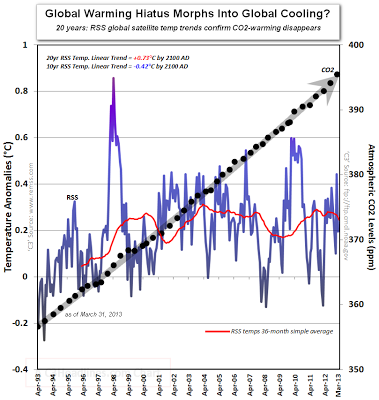 Ove Hoegh-Guldberg, a marine biologist at the University of Queensland, was also a coordinating lead author of the new Open Oceans chapter of the IPCC report.  However, as Donna Laframboise points out, he is aligned with two warming propaganda pushers, WWF and Greenpeace:

He recently wrote a politicized foreword to a WWF brochure, and has a long history of employment with both the WWF and Greenpeace.

Professor Hoegh-Guldberg notes today that ocean temperatures haven't risen and the chemistry of the water changed as fast as they are now for about 65 million years.

“Oceans have absorbed over 90 per cent of the heat arising from human-induced greenhouse gas emissions and have soaked up around 30 per cent of the carbon dioxide from the burning of fossil fuels."

But Ove, the official line is that the warming is hiding in the ocean depths, not in the shallows where the corals are. And the real world data show no warming: