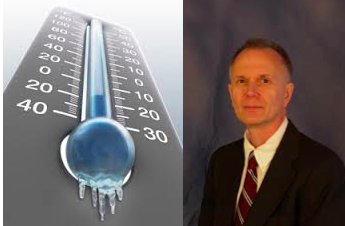 Dr David Deming warned us of the fraudulent MBH98 Hockey Stick before Mann, Bradley and Hughes had fictitiously fabricated their scam scheme.

David Deming has a BS in geology and his Phd is in geophysics. He is Associate Professor of Arts and Sciences at the University of Oklahoma. Deming is the author of more than thirty research papers and the textbook Introduction to Hydrogeology. He is an associate editor for the academic journals Petroleum Geoscience and Ground Water. (link). This blog has previously reported the exchange between Dr David Deming and IPCC Lead Author Jonathan Overpeck (link.)  Overpeck emailed Deming saying that, to scare people, they had to get rid of the Medieval Warm Period (MWP.)  Phil Jones (Professor in the School of Environmental Sciences, UEA)  referred to it in the Climategate emails§. Not long after, the MBH98 Hockey Stick was created.

David has written an opinion piece for the Washington Times:


Another year of global cooling

Global warming is nowhere to be found. The mean global temperature has not risen in 17 years and has been slowly falling for approximately the past 10 years. In 2013, there were more record-low temperatures than record-high temperatures in the United States.

At the end of the first week in January, a brutal spell of cold weather settled over most of the country.

Remember that this is written for the US. However the Clowns from the down-under Climate Council writing alarmists shtuff (link) about global warming and heat-waves should remember the "GLOBAL" part of global warming.

Some sites experienced frigid conditions not seen since the 19th century. Chicago and New York City broke temperature records set in 1894 and 1896, respectively. These extremes were not singular, but exemplary of conditions throughout much of the continent. Temperatures in Chicago were so cold that a polar bear at the Lincoln Park Zoo  had to be taken inside.

Alarmists, like the climate council, warn us of deaths due to "global warming."

For example, during the 2009 heatwave in Melbourne, there were 980 heat related deaths—that’s 374 deaths more than would have normally occurred. (link -pdf)

The operation of power grids, gas pipelines and oil refineries was disrupted. Passengers on Amtrak trains were left stranded, and thousands of flights were delayed or canceled.

The January freeze caused $3 million in damage to vineyards in Ohio.

If the current cooling trend continues for a few more years, the theory of global warming faces imminent extinction. It will then join a long list of other expired environmental doom-and-gloom predictions, including overpopulation, peak oil and nuclear winter.

Save the Polar Bear

Not from Global Warming but from the cold. (link)

Pack it up folks and stay inside, it is officially too cold even for the neighborhood polar bear. DNAinfo Chicago spoke to the folks at the Lincoln Park Zoo and their polar bear, Anana, will be staying warm inside a “climate-controlled” area thanks to the below-zero extreme temperatures in Chicago today.

“Few of us are accustomed to this cold” zoo spokeswoman Sharon Dewar said. Dewar went on to point out to DNAinfo that polar bears in the arctic would typically put on a fat blubber layer going into late winter, but since Anana is a city bear she doesn’t have that blubber layer due to our generally warmer climate.

Until temperatures warm up Anana, the lone polar bear at the zoo, will be staying indoors with the rest of us. To remind us of warmer days, check out Anana playing in the snow below.