The word “Sustainability” has been hijacked with definitions developed by groups pushing various agendas including being used extensively to promote the Agenda 21 agenda to a point that we need to be wary of the use of the word.

Having said that, here is a pre-Christmas story from 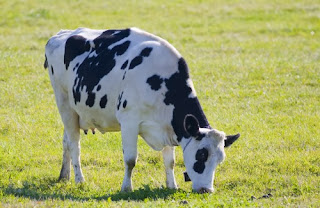 Cattle and other ruminants are probably the biggest human-related source of methane, a gas adding to global warming, and climate negotiators have paid too little attention to livestock, a team of researchers said.

Cows, sheep, goats and buffalo produce “copious amounts” of methane in their digestive systems, Oregon State University wrote in an online press release, citing analysis published in the journal Nature Climate Change today. One of the most effective ways to cut the gas would be to reduce the global population of ruminant livestock, the university said.

Yet there is a multitude (or should I say a stampede?) of information contradicting this. Googling "cattle carbon neutral" brings around a quarter million hits. E.G:-

US Grasslands Carbon Neutral: (The Land)

The US Department of Agriculture (USDA) researchers set out to get a local perspective on European conclusions that managed grasslands are greenhouse gas sinks—(although when methane and nitrous oxide emissions were taken into account, the greenhouse gas balance in the European sites was closer to neutral).

The USDA study, reported this week in the Journal of Environmental Quality, came to a mixed conclusion.

It confirmed that in the North Dakota study area, all grazing treatments sequestered significant quantities of carbon and minor quantities of atmospheric methane.

A NEW report which shows that Queensland's cattle grazing industry is already all but carbon neutral and could provide a solution in addressing the State's overall carbon liability has been buried by the Bligh Government.

It is understood the release of the 30-page report prepared by Queensland Primary Industries and Fisheries has been derailed by Greg Withers, the Director-General of the Queensland Government's Department of Climate Change and Premier Anna Bligh's husband.

The report, which examines the carbon footprint of the beef industry and the impact of vegetation clearing bans, has been peer reviewed by a number of the nation's top scientists, including the CSIRO's Dr Ed Charmley, QUT's Dr Peter Grace, and Meat and Livestock Australia's Beverly Henry. 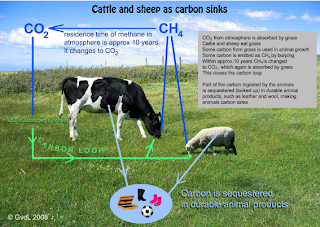 A Paper by Dr Gerrit van der Lingen published by the NZ Climate Science Coalition  (NZCSC) explains why emissions of methane from cattle and sheep should not be part of any emissions trading system in New Zealand. (Link)

Perhaps there was some justification in 2002 before the bottom fell out of the falsified AGW hypothesis. (See also UK Met Office, Jo Nova)


All plants, including grass, require carbon dioxide to grow. Grass is eaten by
ruminants and the carbon in it is used for the growth of the animal and for milk and
wool production. A small part of the carbon from the grass is used to make methane
through enteric fermentation. This methane is emitted by the animals into the
atmosphere. It stays in the atmosphere for only about 10 years, after which it
changes back to carbon dioxide, which in turn is being absorbed by the grass, which
in turn is eaten by the animals, etc. It is basically a closed loop. However, some of
the carbon is incorporated by the animals into skin, wool, meat and bones. Some of
those are subsequently turned into durable animal-based commodities, such as
woollen garments, leather products, even bone carvings. As long as such products
are not incinerated, the carbon stays locked up. It is being sequestered.

Consequently, ruminants act as carbon sinks. There is therefore no justification to
include ruminant methane emissions in the Kyoto Protocol obligations.


Do the Alarmists check both sides of the debate or just go ahead and publish already busted alarm stories?