Remind me Dana Nuccitelli, who are the Deniers? 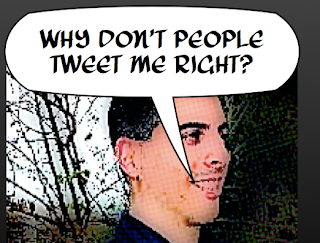 
First of all, his paper with John Cook (link) was torn apart by successive reviewers  when actually it should have been shredded.

Some of the criticisms:


http://wattsupwiththat.com/2013/05/21/cooks-97-consensus-study-falsely-classifies-scientists-papers-according-to-the-scientists-that-published-them/“It would be incorrect to claim that our paper was an endorsement of CO2-induced global warming”

http://www.thegwpf.org/consensus-consensus/“The consensus as described by the survey is virtually meaningless and tells us nothing about the current state of scientific opinion

http://theclimatescepticsparty.blogspot.com.au/2013/07/cook-wrong-on-consensus-monckton_1.htmlThe latest paper apparently showing 97% endorsement of a consensus that more than half of recent global warming was anthropogenic really shows only 0.3% endorsement of that now-dwindling consensus.

A few days ago Desperate Dana was trying to save his reputation. (Link)

Keith Kloor, who writes in The Dirty Art of Character Assassination:

At this point, I asked Dana to clarify which tornado experts claim Roger is “misleading the American public”? He didn’t respond. What he did do is move the goalposts. But even that was incorrect, as Brooks quickly pointed out.

What happened next was astonishing: Rather than apologize, Dana twisted himself into semantic knots in an effort to show that Roger was in the wrong. I tried asking several more times: 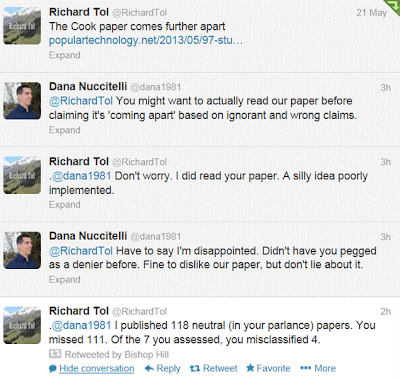 So, remind me, Dana, who are the deniers?

And now for a complete change of pace.

From Denier Land (thanks to Skeptical Science)