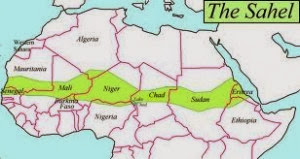 The Global Post today claimed that (re the Sahel Region):

To get a better idea of how climate change can worsen conflict there, GlobalPost spoke with three experts on the topic: Drew Sloan of energy efficiency company Opower, Marshall Burke of the University of California, Berkeley and Josh Busby of the University of Texas at Austin.

Their short answer? It's complicated, but climate change is making things harder for those who live in a politically unstable and economically challenged region.

NCTCS blog wonders if this is before the 17+year stall in the global warming. They asked the three experts:


What role is climate change playing in conflicts across the Sahel?


“When you and your family have been living off the same land for generations and all of a sudden that becomes impossible, the first impact is relocation. But there’s a limited amount of land in the world so we’re going to see more and more skirmish zones.” 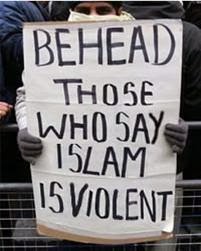 But, hold up, Drew. Surely the alarmists have been worried about rising CO2 which is supposed to cause catastrophic warming. But, has it?


Well, our home-grown (and sometime alarmist) CSIRO has stated that "Deserts (are) 'greening' from rising CO2 (http.www.csiro.au/Portals/Media/Deserts-greening-from-rising-CO2.aspx) This has been erased from the CSIRO site.

Referring to the above report, Science Daily has announced that

Even "Our" ABC reported that:


Rising levels of carbon dioxide have increased vegetation growth in the world's deserts by as much as 11 per cent over the last 30 years.

SO, does Drew's argument hold up or is Al Qaeda looking for any excuse to attack the West?


Is the situation getting worse or better?

Why not ask in the order better or worse? Was that a loaded question?


“The climate situation is almost surely getting worse. We know that temperatures are going up, and that soon they will be on average much warmer than anything the region has experienced and this is likely to increase the incidence of conflict.”

But Burkey, old chap, according to the Skeptical Science Trend Calculator, temperatures this century are declining. Eg

So, do you mean, by getting worse, the deserts are getting colder?

Why is it then that these people are blaming man made global warming for the increase in Islamic Terrorism? Is it perhaps because, in January 2010, bin Laden blamed the United States (and indirectly Australia) for Global Warming? (link)


Usama bin Laden sought to draw a wider public into his fight against the United States in a new message Friday, dropping his usual talk of religion and holy war and focusing instead on an unexpected topic: global warming.The Al Qaeda leader blamed the United States and other industrialized nations for climate change and said the only way to prevent disaster was to break the American economy, calling on the world to boycott U.S. goods and stop using the dollar.

"The effects of global warming have touched every continent. Drought and deserts are spreading, while from the other floods and hurricanes unseen before the previous decades have now become frequent," bin Laden said in the audiotape, aired on the Arab TV network Al-Jazeera.

World agricultural output continues to rise, despite predictions of decline.

The year 2013 has been a great year for global agriculture. Record world production of rice and healthy production of wheat and corn produced strong harvests across the world. These gains were achieved despite continuing predictions that world agricultural output is headed for a decline.


This is the opening Sentence in an Opinion Piece written by Steve Gorham for the Washington Times. Previously this blog has written pieces with the theme "CO2 is Plant Food," and "CO2 is Good for You. "  ( See links here, here, here) And Even The Earth Is happily gobbling more CO2.

The Purveyors of Doom aka The Alarmists have been saying we will run out of food for more than 40 years. In 1969 Paul Ehrlich and POTUS Obama's senior advisor on science and technology John Holdren wrote  a paper published by Bioscience titled Population and Panaceas (link)


There is a tendency among the public to assume that technology will somehow solve the world population problem through farming the sea and the tropics, irrigating the deserts, and generating cheap nuclear power in abundance. The facts are that farming the seas is a technology that is far in the future, that tropical soils are not suitable for intensive farming and areas which are suitable for intensive farming are requiring immense amounts of fertilizer to keep production high, that the world is running out of water and irrigating the deserts will require immense technology, and that nuclear power is not cheap and it will be many years before it is abundant. Desalinization techniques exist which could make desert irrigation possible but every day a samll desalinization plant produces enough salt to cover 15 acres of land a foot deep. Getting rid of this salt is also a major problem. Before technology can possibly catch up with world demand, active efforts must be made to decrease the mushrooming growth of world population. -


Meanwhile, as Steve Gorham wrote in the introductory paragraph, 2013 has been a great year for global agriculture.  In Australia, we have also had a bumper crop.

Growers in clover with a grainy day gift


GRAIN growers are on track to deliver a bumper harvest of wheat, despite crops in NSW and Queensland being damaged by frosts and dry conditions.

A 12 per cent increase in overall winter crop production is being forecast by the Australian Bureau of Agricultural and Resource Economics and Sciences, with 42.1 million tonnes expected.

This year's wheat harvest is expected to reach 26.2 million tonnes -- up 17 per cent on last year -- due to strong conditions and rains in Western Australia, South Australia and Victoria.

The Editor of NatureNews, Mike Adams, wrote in March:

If you talk to the global warming crowd, carbon dioxide -- CO2 -- is the enemy of mankind. Any and all creation of CO2 is bad for the planet, we're told, and its production must be strictly limited in order to save the world.

As it turns out, CO2 is desperately needed by food crops, and right now there is a severe shortage of CO2 on the planet compared to what would be optimum for plants. Greenhouse operators are actually buying carbon dioxide and injecting it into their greenhouses in order to maximize plant growth.

And in the peer-reviewed Nature (link) increased CO2 enhances biomass:

Plant diversity enhances ecosystem responses to elevated CO2 and nitrogen depositionWe found that the enhanced biomass accumulation in response to elevated levels of CO2 or nitrogen, or their combination, is less in species-poor than in species-rich assemblages.

A study in another Peer-reviewed journal Biogeosciences (link - pdf) had a similar finding:

AS we learn from Bob Carter et al's Taxing Air (Link), atmospheric CO2 has been much more concentrated in previous times without any disastrous results - See image below.

SOLAR AND PLANETARY OSCILLATION CONTROL ON
CLIMATE CHANGE: HIND-CAST, FORECAST AND A
COMPARISON WITH THE CMIP5 GCMS 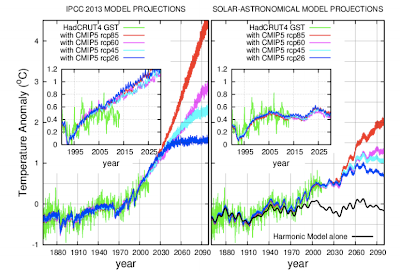 Global surface temperature records (e.g. HadCRUT4) since 1850 are characterized by climatic oscillations synchronous with specific solar, planetary and lunar harmonics superimposed on a background warming modulation. The latter is related to a long millennial solar oscillation and to changes in the chemical composition of the atmosphere (e.g. aerosol and greenhouse gases). However, current general circulation climate models, e.g. the CMIP5 GCMs, to be used in the AR5 IPCC Report in 2013, fail to reconstruct the observed climatic oscillations. As an alternate, an empirical model is proposed that uses: (1) a specific set of decadal, multidecadal, secular and millennial astronomic harmonics to simulate the observed climatic oscillations; (2) a 0.45 attenuation of the GCM ensemble mean simulations to model the anthropogenic and volcano forcing effects. The proposed empirical model outperforms the GCMs by better hind-casting the observed 1850-2012 climatic patterns. It is found that: (1) about 50-60% of the warming observed since 1850 and since 1970 was induced by natural oscillations likely resulting from harmonic astronomical forcings that are not yet included in the GCMs; (2) a 2000-2040 approximately steady projected temperature; (3) a 2000-2100 projected warming ranging between 0.3 °C and 1.6 °C, which is significantly lower than the IPCC GCM ensemble mean projected warming of 1.1 °C to 4.1 °C; (4) an equilibrium climate sensitivity to CO2 doubling centered in 1.35 °C and varying between 0.9 °C and 2.0 °C.

BackgroundThe author writes that "global surface temperature records (e.g. HadCRUT4) since 1850 are characterized by climatic oscillations synchronous with specific solar, planetary and lunar harmonics superimposed on a background warming modulation," which he says "is related to a long millennial solar oscillation and to changes in the chemical composition of the atmosphere (e.g. aerosol and greenhouse gases)." However, he notes that "current general circulation climate models, e.g. the CMIP5 GCMs, to be used in the AR5 IPCC Report in 2013, fail to reconstruct the observed climatic oscillations."


What was learned
Scafetta reports that his proposed empirical model "outperforms the GCMs by better hind-casting the observed 1850-2012 climatic patterns." More specifically, he notes that "about 50-60% of the warming observed since 1850 and since 1970 was induced by natural oscillations likely resulting from harmonic astronomical forcings that are not yet included in the GCMs."

What it means
The way Scafetta sees things, "the results of this analysis indicate that the GCMs do not yet include important physical mechanisms associated with natural oscillations of the climate system." And, therefore, he suggests that interpretations and predictions of climate change based on current GCMs, including the CMIP5 GCMs to be used in the IPCC AR5, are "questionable."