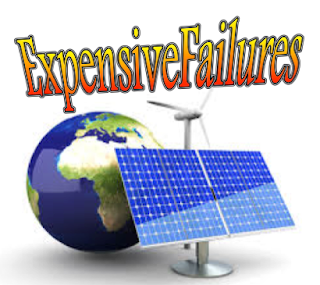 Rob Wile, writing for Business Insider has  exposed a truth not much mentioned in Australian Media:

In the last four years, European electricity costs have spiked 17% for homeowners and 21% for industry, according to the Institute of Electrical and Electronics Engineers.

The situation is most acute in the UK, where one in six households was spending more than 10% of its income to “maintain adequate warmth” in 2011, according government statistics cited by Reuters’ John Kemp.

You have to ask? Carbon Emissions targets and the subsidies on renewable energy.


For instance, German utilities just increased the surcharge levied on consumers to fund more renewables by 18% to 6.24 euro-cents per kilowatt-hour. German households now have the third-highest power bills in Europe.

European power suppliers are saying the drive to renewables has caused them to mothball 51 Gigawatts-worth of cheaper fossil fuel-based power sources, or the equivalent to the combined capacity of Belgium, the Czech Republic and Portugal, Bloomberg’sEwa Krukowska, Alessandro Vitelli & Tino Andresen reported.

Meanwhile, Australia's new Abbott government, although aiming to scrap the tax on essential carbon dioxide, will continue to prop up renewable energy with subsidies. 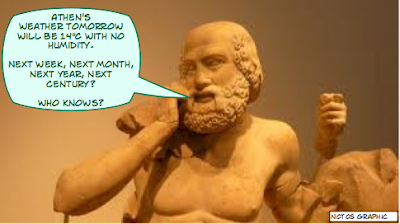 The beginnings of the scientific study of the climate can be traced back to ancient India in 3000 BC, and it has been developed by the Greeks, Arabs, Chinese and every subsequent generation.

Measurement instruments such as rain and wind gauges, barometer, thermometer, hygrometer were added over the years.

Networks of weather observations were set up in Italy as early as 1654. Joseph Henry at the Smithsonian Institute in the USA set up a United States network in 1849 .The first official Meteorological Office in the world was set up in London in 1854 under Admiral Robert Fitzroy. He had already sailed around the world with Darwin as captain of the “Beagle: and been the Second Governor of New Zealand, dismissed prematurely because he was too sympathetic to Maoris.

He published the first daily weather forecast in the “Times” in 1860.  The following year a system was introduced of hoisting storm warning cones at principal ports when a gale was expected. Fitzroy invented a barometer which still occasionally turns up on the Antiques Roadshow.

Soon most nations had an official weather service. The quantity of observations became so large that it was only with the advent of the computer in the 1950s that methods were developed to organise them and to use them to provide a reliable forecasting service.

This came about with the development of numerical computer models. They would begin with established climate systems like  atmospheric and ocean circulation patterns shown here.

Then the models were built up by adding a range of variables on a grid on and above the earth. 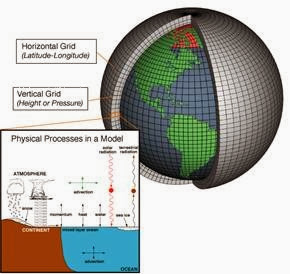 Even with the increasing power of supercomputers, the forecast skill of numerical weather models extends to about only six days.

Factors affecting the accuracy of numerical predictions include the density and quality of observations used as input to the forecasts, along with deficiencies in the numerical models themselves.

Although post-processing techniques such as model output statistics (MOS) have been developed to improve the handling of errors in numerical predictions, a more fundamental problem lies in the chaotic nature of the partial differential equations used to simulate the atmosphere and ocean currents where small errors grow with time (doubling about every five days).

In addition, the partial differential equations used in the model need to be supplemented with parameterizations for solar radiation, moist processes (clouds and precipitation), heat exchange, soil, vegetation, surface water, and the effects of terrain.

In an effort to quantify the large amount of inherent uncertainty remaining in numerical predictions, ensemble forecasts have been used since the 1990s to help gauge the confidence in the forecast, and to obtain useful results farther into the future than otherwise possible. This approach analyzes multiple forecasts.

It should be noticed that nowhere in this effective system is there any mention of carbon dioxide or of “greenhouse gases.” They have no place in a scientific study of the climate. Most meteorological organisations do not even bother to measure carbon dioxide over land territories.

The climate models favoured by “Climate Change” “scientists” completely ignore the scientific discoveries of genuine climate scientists since time immemorial. They promote completely different computer models based on the following absurd principles:
It is unsurprising that such a model has no value for future climate forecasting. The advocates prefer to provide “projections” far into the future. Successful simulation of past climate is proof of the models, while failure is due to “natural variability”. They emulate the Indian doctor who could forecast the sex of an unborn child with a money back guarantee if he was wrong.

If you want to know about climate science, switch on or read about the weather forecast.
.
I would like to acknowledge the excellent articles on this subject at Wikipedia