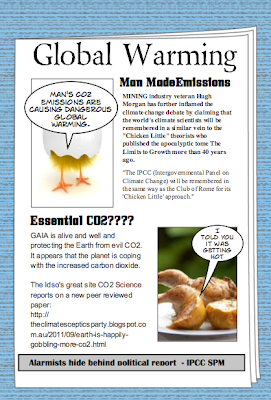 Recently there are many querying the "science' behind global warming alarmism, however Hugh Morgan has been a long-time opposer of the falsified man-made global warming hypothesis.

Now he has comes out and called a spade a spade. In a column in the National Australian by Andrew Burrell headed:  IPCC this century's 'Chicken Little'


MINING industry veteran Hugh Morgan has further inflamed the climate change debate by claiming that the world's climate scientists will be remembered in a similar vein to the "Chicken Little" theorists who published the apocalyptic tome The Limits to Growth more than 40 years ago.

The long-time climate change sceptic said the intensity of the debate on global warming made it timely to consider the impact of the 1972 book published by the Club of Rome, which sold 12 million copies and was translated into 37 languages.

The Club of Rome - a group of mostly European scientists and academics - used computer modelling to warn that the world would run out of commodities, including gold, mercury, silver, tin, zinc, petroleum, copper, lead, oil and natural gas, within 30 years.

The book captured the public's imagination by warning of the "sudden and uncontrollable collapse" of economic life.

This followed up on David Murray's suggestion last week that the world's climate scientists lacked integrity. (See Climate Problem severely overstated.) At that time Lateline Host Emma Alberici pointed out that the most recent IPCC report was written by 250 authors from 39 countries and was subject to review by more than 1000 experts, but he could not be swayed.

In fact the report released was the Summary for Policy Makers. The "science" behind this summary has yet to be released. The summary is agreed and/or doctored line by line by representatives of governments.

The main mechanism for ensuring uniformity of thought is applied by the presence in all of the IPCC Reports of a “Summary for Policymakers” at the beginning. This is really a Summary BY Policymakers, because it is dictated, line by line by the government representatives who control the IPCC to a group of reliable “Drafting Authors.” It is published before the main Report, to emphasize the need for conformity. (IPCC Expert Reviewer Dr Vincent Gray.)

Bill Shorten is quoted by Andrew Burrell as saying; "We accept the science of climate change."

Which science is that, Bill?

The science of the IPCC alarmists


or perhaps the science of the NIPCC which is the work of approximately 50 independent scientists.