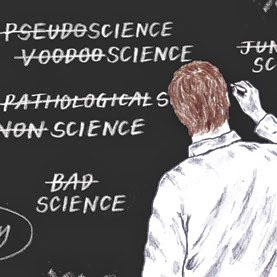 The Environmental Movement is an anti-science pseudo religion which believes that humans are destroying “The Planet." In order to promote this view they have set up organisations for their activists, such as Greenpeace, where every member and official had to propagate the official doctrine, imposed from above.

In the 1980s a group of rogue scientists, who supported this dogma, suggested that the public and governments would accept it more readily if it was a “settled” opinion of a sufficiently large group of scientists. They invented a new pseudo-scientific model of the climate which ignored the scientific understanding of the climate built up by generations of meteorologists, which was supposedly related to Fourier’s explanation of how a greenhouse worked. It claimed that climate is controlled by human–related emissions of carbon dioxide and other minor “greenhouse gases.

They persuaded the World Meteorological Association and their own United Nations Environment Programme to set up the Intergovernmental Panel on Climate Change to gather together scientific material to support this project in preparation for the Rio :Earth Summit in 1991 which launched the deception.

At the time, employment of scientists had fallen. Generous salaries, promotion and foreign travel was offered to those who would support this programme, combined with a campaign of elimination of critics by influence on Journal Editors, the Universities, Official Scientific Bodies and the international media.

The IPCC has now issued five major Reports. These have been amazingly successful in persuading governments all over the world that they can prevent what is alleged to control “global warming” by reducing emissions of carbon dioxide and other minor greenhouse gases.

The IPCC ran into a problem that does not affect an organisation such as Greenpeace. Scientists are usually trained to think for themselves, and some of those who have been recruited to support the “climate change” programme find if difficult not to insert their reservations into the opinions that are proscribed for them.

The main mechanism for ensuring uniformity of thought is applied by the presence in all of the IPCC Reports of a “Summary for Policymakers” at the beginning. This is really a Summary BY Policymakers, because it is dictated, line by line by the government representatives who control the IPCC to a group of reliable “Drafting Authors” It is published before the main Report, to emphasize the need for conformity. In addition they try to exert pressure in the choice of “Lead Authors” and in the treatment of comments made by the “reviewers” who receive drafts of the Reports.

Despite all this pressure, complete uniformity of thought has, so far, never been achieved.

“The persons named below all contributed to the peer review of the IPCC Working Group I Report. Whilst every attempt was made by the Lead Authors to incorporate their comments, in some cases these formed a minority opinion which could not be reconciled with the larger consensus. Therefore, there may be persons below who still have points of disagreement with areas of the Report.”

But it still stated, even in the “Summary for Policymakers” of the 1990 Report and in its 1992 Supplement:-

Climate observations, which appear only in the last chapter of the 1990 report, are not “broadly consistent with the predictions of climate models” Also all subsequent Reports had to admit that they are actually incapable of making “predictions” but only “projections” dependent on whether you believe the assumptions of the models.

The Second IPCC Report “Climate Change 1995 : The Science of Climate Change” had to confront a series of opinions in the Draft of the Final Report which disagreed with the greenhouse theory. It included the following statements:-

"None of the studies cited above has shown clear evidence that we can attribute the observed changes to the specific cause of increases in greenhouse gases."

Finally we come to the most difficult question of all:

'When will the detection and unambiguous attribution of human-induced climate change occur?'

In the light of the very large signal and noise uncertainties discussed in this Chapter, it is not surprising that the best answer to this question is 'We do not know’. Few if any would be willing to argue that unambiguous attribution of this change to anthropogenic effects has already occurred, or was likely to happen in the next several years.

One of their scientists (Ben Santer) was given the job of eliminating all the offending passages, or changing them to give a more favoured opinion.

But after all that they ended up with this equivocal conclusion:

This is something everybody can agree on. Humans spend all of their efforts in trying to influence the climate. The statement says nothing about greenhouse gases or of carbon dioxide. It supports the offending passages that were deleted.

The Third Report “Climate Change 2001: The Scientific  Basis” was the one for which I did a detailed analysis  called “The Greenhouse Delusion”.

The following statement appeared in Chapter 1:-

“The fact that the global mean temperature has increased since the late 19th century and that other trends have been observed does not necessarily mean that an anthropogenic effect on the climate has been identified. Climate has always varied on all time-scales, so the observed change may be natural”.

In the Policymakers Summary we get another equivocal opinion:-

“in the light of the new evidence and taking into account the remaining uncertainties, most of the observed warming over the last 50 years is likely to have been due to the increase in greenhouse gas concentrations”.

Here they change tack. Once again they do not claim that there is evidence that this is so, merely that it is the opinion of their paid “experts:  They seem to think that if they assign to the opinion “likely” as meaning greater than 60% probability that this makes it any other than merely an opinion.

And so we come to IPCC Science Report No 4 “Climate Change 2007: The Physical Science Basis”

Now we get a slight amendment to the previous equivocal statement

Again it is not evidence but opinions of their  paid experts who are now 95% certain they are right, but it only applies to "most” of the evidence and it only applies to their highly inaccurate temperature series, but not to the more accurate satellite and radiosonde series which began in 1978 and 1958 respectively.

Despite all this they were awarded the Nobel Peace Prize together with Al Gore.

The Fifth IPCC WGI AR5 Report “Climate Change 2013: The Physical Science Basis” has now been made available from their recent  meeting in Stockholm.

We get yet another set of  equivocal opinions.

“Human influence on the climate system is clear”

Is this an advance on “discernible” ?

Again no mention of greenhouse gases and how much is “dominant?."

“Since the mid 20th Century”, is pretty short in geological or even in human lifetime terms  and it is again arranged so as to eliminate the more reliable satellite and radiosonde measurements.

They ignore completely the “hiatus” that has taken place. Their technique of “observing” this “unequivocal” and “unprecedented” warming has failed to do so for the past 17 years.

The Summary for Policymakers may have been approved, and it is issued freely to the public, but it is obviously unfinished, has a large number of necessary editing, and it carries the request “Do not Cite do not Quote, do not Distribute.”

For the first time they have failed to approve the Final version of the Report. They merely “accept” it and issue a list of 134 “Corrections” which are intended to make the main Report compatible with the “Summary for Policymakers”.

So we have once more the same game they played on the Second Report, except this time it is applied officially by all of them and not by one individual.

I have had a good look through all of them and have not found evidence of drastic alteration. They seem merely to be trying to improve the cover up of the so-called temperature “hiatus” which has made them feel even more confident than before that it does not matter and will soon go away.

I have managed to make my way through much of the main Report and l have a few preliminary comments.

They have laboured hard to deal with the “hiatus” by such devices as using “decadal” averages and different starting and ending dates but not very successfully.

They still avoid the mismatch between “emissions” which are only from the land and “concentrations” which are mainly measured over the sea, and the fact that there is no established relationship between them.

They have deliberately confused “sea level” of the ocean, usually calculated from models and “relative sea level” between sea and land which is the only one that matters.

It is now obvious that the uncertainties which they have attached to estimates of the earth’s energy on their revised diagram are so much larger than the claimed “projections” of the model calculations are meaningless.

As a final conclusion, attempts of the IPCC to impose rigid discipline on a large group of scientists to persuade them to claim that human emissions of so-called greenhouse gases harm the climate, without being able to supply convincing evidence, has been a failure.

Even their opinions on the supposed reliability of their “projections” always leave an increasingly small escape route for the day when their approach is proved wrong.

Vincent Gray
Wellington
Posted by Geoff on October 14, 2013 No comments: