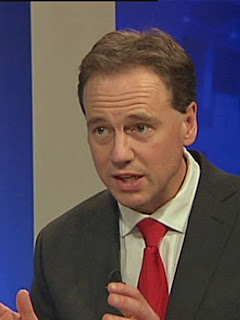 The shadow minister for climate change, Greg Hunt, is a humble man – a diligent man, a softly spoken man. And today we can add another epithet: a very generous man.

And he’s not just generous himself. He wants all of us to dig deep and help pay for a ‘fair go’ for a struggling group of Australians: major CO2 emitters (emphasis added)

That’s according to yet another study released to demonstrate just how generous tax-and-spend carbon abatement is compared to the creation of a market for the social costs created by polluting the world’s skies.

Australian Climate Sceptics blog has written before that, although the Coalition are going to reverse the carbon tax, they were the first Australian party to agreed to Kyoto 2 (Link):-

They also support The Renewables Energy Targets (RETs) and carbon mitigation or as Rob Burgess calls it, carbon abatement. To continue with the Climate Spectator report:


"What the world really needs is to bring China and India and Indonesia on board, to bring Russia and Brazil on board. I think it will be easier

If Australia signs up to a new target under Kyoto, it will become the first non-European developed nation to do so.

The nations indicating they will not sign on for Kyoto 2 are Canada; USA;  Japan and Russia. China and India have no targets under Kyoto 2.

Under the present scheme under the current government, Australia will be trading carbon credits with the commissars of the European Union controlling the price. (Link)


The European Union's regulatory arm is winnowing down the options for a long-term overhaul of the world's biggest carbon market and aims to make a decision in the coming months, EU Climate Action Commissioner Connie Hedegaard said.

The European Commission has floated several scenarios to help curb a record glut of emission permits and boost the price of carbon in the bloc's €54 billion ($72 billion) Emissions Trading System, where prices slumped to an all-time low in April.

“We're now narrowing down the options and we will propose something in the autumn,” Hedegaard said in an interview in Brussels Aug. 27.

Why do NCTCS preference Labor over LNP in three states?


I’m glad the question has been asked, and I hope the answer I provide here will be given equal prominence to avoid confusion. No, we are not a Labor front group. What we are doing is trying to keep Greens from getting elected.
Let me explain. Suppose there are 69 voters and the quota to elect a Senator is 10. The LNP gets 35 votes, the ALP 25 the Greens 6 and the No Carbon Tax Climate Sceptics 3. The LNP elects 3 senators, the ALP 2 and there is a preference race for the last seat with the two major parties each having a surplus of 5. As our vote is lowest we are excluded and our preferences distributed first.
If we got to the LNP, their vote goes up to 8 – still short of a quota. Then the ALP is excluded and their preferences elect a Green. Bad outcome.
However, if our preferences go to the ALP, this puts them in front of the Greens and they instead will win the last “left” seat.
This is a highly simplified example but a similar situation is likely to unfold in those three states. In each the “right” will win three seats and the “left” three – and there is nothing we can do to change that. However we do have the opportunity to potentially change which party gets the last “left” seat and that is what we are trying to do.
Trust us. We really really understand preference math. If you don’t believe me, go here:http://originaltruthseeker.blogspot.com.au/2013/08/south-australian-senate-no-carbon-tax.html