“Global Warming is no longer Cool”

That is how much the IPCC’s central projection of global warming over the 8 years 6 months January 2005 to June 2013 has overshot the observed temperature trend. The long, unpredicted pause in global warming continues.

Ø If the 102-month IPCC overshoot were to continue for 100 years, the IPCC’s prediction would exceed the measured trend by 2.57 Cº. The IPCC’s central projection of global warming to 2050 is 2.33 Cº (Fifth Assessment Report).

Ø Though the IPCC projection shows the world should have warmed by 0.20 Cº since 2005, the mean of the RSS and UAH satellite global temperature datasets shows cooling of 0.02 Cº, equivalent to 0.24 Cº/century. The predicted and actual trends are visibly diverging. Solar physicists and mathematicians expect significant cooling over at least the next five years. 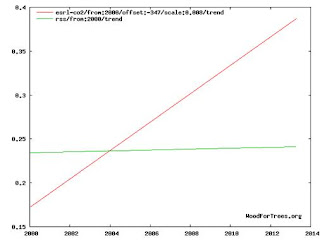 Ø The least-squares trend on the RSS satellite dataset shows no global warming at all for 16 years 7 months (199 months). The NOAA, in its 2008 State of the Climate report, said 15 years or more without warming would indicate a discrepancy between the models and the real world.

Ø There has been no global warming above the published measurement and coverage uncertainties for 17 years 5 months (HadCRUt4 dataset). Dr. Rajendra Pachauri, the IPCC’s climate-science chairman, admitted in February 2013 that there had been a 17-year “pause” in global warming. Dr. Ben Santer has said that 17 years or more without warming would raise concerns about the reliability of the models.

Ø See how the Global Warming Prediction Index is compiled HERE

Lord Monckton said: “The profiteers of doom were wrong. There is a growing gulf between the colourful predictions of the IPCC’s models and the less exciting real-world temperatures measured by satellites. Savage increases in the cost of fuel and power are needlessly causing hardship and death, and all in the name of a catastrophism that has now been thoroughly discredited by events. The bankrupt nations of the West should stop throwing good money after bad. The temperature record shows man-made climate change is a non-problem.”

He added: “Global warming is no longer cool.”