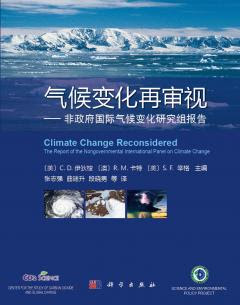 A press release from the Heartland Institute:

The Chinese Academy of Sciences in June 2013 translated and published a Chinese edition of Climate Change Reconsidered and Climate Change Reconsidered: 2011 Interim Report, two hefty volumes containing more than 1,200 pages of peer-reviewed data on climate change originally published by The Heartland Institute in 2009 and 2011.
The two books present a sweeping rebuttal of the findings of the United Nations’ controversial Intergovernmental Panel on Climate Change (IPCC), whose reports were widely cited as the basis for taking action to stop or slow the advance of climate change. More recently, the IPCC has been surrounded by controversy over lapses in its quality control and editorial bias.
The Chinese Academy of Sciences is the world’s largest academy of sciences, employing some 50,000 people and hosting more than 350 international conferences a year. Membership in the Academy represents the highest level of national honor for Chinese scientists. The Nature Publishing Index in May ranked the Chinese Academy of Sciences No. 12 on its list of the “Global Top 100” scientific institutions – ahead of the University of Oxford (No. 14), Yale University (No. 16), and the California Institute of Technology (No. 25).
The first 856-page volume of Climate Change Reconsidered, published in 2009, and its follow-up, the 430-page Climate Change Reconsidered: 2011 Interim Report,were produced by a team of scientists originally convened by Dr. S. Fred Singer under the name of the Nongovernmental International Panel on Climate Change (NIPCC). The volumes were coauthored and edited by three climate science researchers:

All three men will be in Beijing for the Chinese Academy of Sciences event on June 15, 2013 to speak about the translation ofClimate Change Reconsidered. Scores of additional scientists, economists, and policy experts reviewed and contributed to the volumes.
Posted by Geoff on June 13, 2013 No comments: