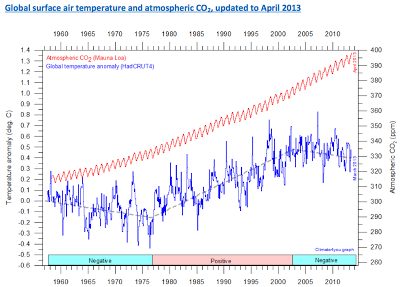 Mauna Loa Observatory (MLO) is a premier atmospheric research facility that has been continuously monitoring and collecting data related to atmospheric change since the 1950's. The undisturbed air, remote location, and minimal influences of vegetation and human activity at MLO are ideal for monitoring constituents in the atmosphere that can cause climate change. The observatory is part of the National Oceanic and Atmospheric Administration (NOAA) - Earth System Research Laboratory (ESRL) - Global Monitoring Division (GMD).

The full Mauna Loa record  and recent monthly mean of atmospheric CO2 can be found HERE.

The Hadley  Climatic Research Unit (CRU) is a component of the University of East Anglia and is one of the leading institutions concerned with the study of natural and anthropogenic climate change.[1]
With a staff of some thirty research scientists and students, the CRU has contributed to the development of a number of the data sets widely used in climate research, including one of the global temperature records used to monitor the state of the climate system.

Every month Professor Humlum issues a report "Climate4You"  One of the graphs from April 2013 Climate4You is re-published above.  This graph combines the Mauna Loa CO2 data and the temperature from Hadley.

Although the atmospheric Carbon dioxide is ever rising, the temperature from data from Hadley CRU (HadCRUT4) shows a falling trend fron 1957 to 1977, a rising trend from 1977 to 2003 and falling from 2003 to March 2013.
See any correlation?

In the 1990′s the classic Vostok ice core graph showed temperature and carbon in lock step moving at the same time. It made sense to worry that carbon dioxide did influence temperature. But by 2003 new data came in and it was clear that carbon lagged behind temperature. The link was back to front. Temperatures appear to control carbon, and while it’s possible that carbon also influences temperature these ice cores don’t show much evidence of that. After temperatures rise, on average it takes 800 years before carbon starts to move. The extraordinary thing is that the lag is well accepted by climatologists, yet virtually unknown outside these circles. The fact that temperature leads is not controversial. It’s relevance is debated.

Joanne has plotted the graphs and the complete set from 420,000 years to 5,000 years before the present can be found at this link. As an example: