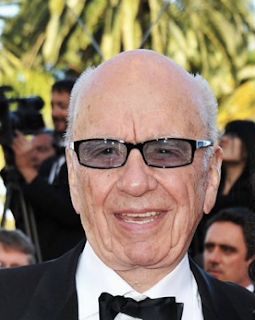 The Mail Online reports that Rupert Murdoch has taken to attacking environmentalists on Twitter. (Link) He claims that rising levels of carbon dioxide from fossil fuels have been good for the planet.


The media mogul based his statements on an article which reported that 30 years of satellite images have shown that the Earth is actually getting greener.

Murdoch referred to a Wall Street Journal article by Matt Ridley headlined How Fossil Fuels Have Greened the Planet.


Did you know that the Earth is getting greener, quite literally? Satellites are now confirming that the amount of green vegetation on the planet has been increasing for three decades. This will be news to those accustomed to alarming tales about deforestation, overdevelopment and ecosystem destruction.

This possibility was first suspected in 1985 by Charles Keeling, the scientist whose meticulous record of the content of the air atop Mauna Loa in Hawaii first alerted the world to the increasing concentration of carbon dioxide in the atmosphere.

Murdoch also referred to the uselessness of "renewable"  energy.

The conclusion is drawn from data collected since the Eighties by NASA scientist Compton Tucker who tracked global vegetation using satellite sensors.

The researcher discovered that forests were getting larger across the world - from the spruces of Canada to the Amazon rainforests.

The reason is given that if people burn fossil fuels then there is more carbon dioxide for plants to consume which in turn, makes them grow faster.