The Australian Government have been presenting alarming stories of sea level rise. From the Department of Climate Change site (link)


Coastal areas will be vulnerable to flooding from sea level rise in different ways, in large part due to the topography, or elevation, of the landscape. Highly accurate mapping of the elevation of the landscape is therefore essential to identify low-lying areas that are potentially at risk of inundation from rising sea levels.


In late 2009, the Australian Government completed a national assessment of the climate change risks to Australia's coast. The assessment identified the climate change risks to coastal settlements, infrastructure, industries and ecosystems; it found that up to 247,000 residential buildings in Australia, with an estimated replacement value of $63 billion (2008 values), may be at risk from rising sea levels by 2100.

Towards the end of this century it is possible that all of Australia's coastal regions will experience systematic impacts from rising sea levels and eroding shorelines.

From the Government's Publication - Climate Change and the Coast (pdf link)


A new peer-reviewed paper by sea level expert Nils-Axel Mörner, concludes that Australian government claims of a 1 meter sea level rise by 2100 are greatly exaggerated, finding instead that sea levels are rising around Australia and globally at a rate of only 1.5 mm/year. This would imply a sea level change of only 0.13 meters or 5 inches by 2100. Dr. Morner also finds no evidence of any acceleration in sea level rise around Australia or globally. 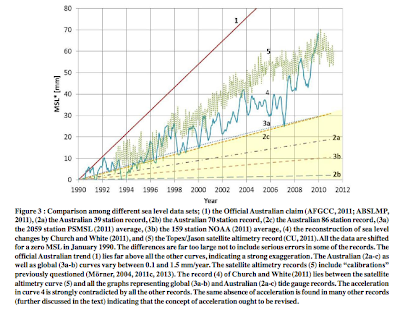 In view of the data presented, we believe that we are justified to draw the following conclusions:
(1) The official Australian claim [2,3] of a present sea level rise in the order of 5.4mm/year is significantly exaggerated (Figure 3).
(2) The mean sea level rise from Australian tide gauges as well as global tide gauge networks is to be found within the sector of rates ranging from 0.1 to 1.5 mm/year (yellow wedge in Figure 3).
(3) The claim of a recent acceleration in the rate of sea level rise [2,3,12] cannot be validated by tide gauge records, either in Australia or globally (Figure 3). Rather, it seems strongly contradicted [19,21,24,39-41]
The practical implication of our conclusions is that there, in fact, is no reason either to fear or to prepare for any disastrous sea level flooding in the near future.

PS. A Press release from Greg Combet says that Greg has added "wind to the sails" by a grant to convert a sea level boat shed at Rathmines into a home for the Lake Macquarie Classic Boat Association.
Greg:


FULL STEAM AHEAD FOR THE MEN’S BOAT SHED AT RATHMINES

“There is a small but dedicated group of volunteers at the Lake Macquarie Classic Boat Association, and they work tirelessly each year to bring the popular Classic Boatfest to life,” Mr Combet said.

“Now they have a new mission – a Men’s Boat Shed.”

“I’m really pleased this grant will help get this unique shed up and running, and I have no doubt it will appeal to a lot of local boaties with a bit of time to spare.”

Don't worry, Greg. The Men's Boat Shed won't be inundated. (Neither will your seaside family home.)
Posted by Geoff on April 27, 2013 2 comments: