The UNFCCC holds regular meetings to discuss the stabilisation of "greenhouse gas concentrations in the atmosphere at a level that would prevent dangerous anthropogenic interference with the climate system." (Link)

They meet two or three times per year and have had 48 meetings between February 97 and the latest meeting at Doha, Qatar in Nov-Dec 2012. (link)

Often they go to sunny beach resorts. Strange, surely they are against warmth?


It was 54ºF (12.2ºC) in Cancun this morning — a record low for the date. Al Gore is not supposed to be here…but it could be that the Gore Effect has announced his secret arrival.

A year before, COP-15 was held in Copenhagen. On cue, as The Examiner reported: (link)


As if on cue with former Vice President Al Gore’s arrival in Copenhagen, the site of the United Nation’s climate summit is expected to receive heavy snowfall and bitter cold temperatures. With a bit of amusement some have pointed to the arrival of the cold weather as an example of the ‘Gore Effect’.

The Examiner (link) listed more than 20 events between January 2004 and Copenhagen 2009 which were hit by the "Gore Effect."

I have worked out an antidote to the "Gore Effect." (But don't tell them, let them keep suffering.)

My answer is for them to go to Germany.

Germany you ask? But isn't is freezing at the moment?

Because some stations in Germany have been keeping weather records for as long as 300 years, e.g. Dresden, Braunschweig and Potsdam, “scientists consider it appropriate to call it an event of the century,” FOCUS reports.

Well, they could hold their meetings in this snow-bound building that used to be a hangar for air-ships. But why, you ask, would you hold a UNFCC meeting in a cold snow-bound hangar?

The 'resort' is actually located on the site of a former Soviet military air base in Krausnick, Germany.

Tropical Islands is inside a hangar built originally to house airships designed to haul long-distance cargo. And despite it looking like temperatures are through the roof - outside the giant hangar it is actually snowing. The resort contains a beach, a lagoon , water slide and adventure park. 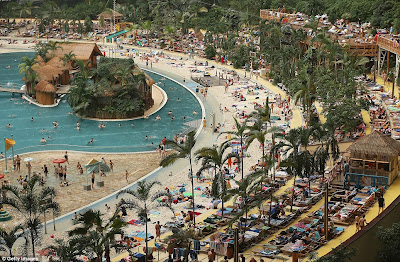 
Recent papers and articles of Interest.

The Warmist conspiracy has reached a critical point, with doubters in the establishment speaking out. The conspirators had banked on panic to help expand government control over the world's economies. But momentum in public opinion has swung against the doomsayers.

Even global warming profiteers like the now comic figure of James Hansen of NASA who predicted in 1986 that by 2000 “global temperatures will rise to a level which hasn’t existed on earth for 100,000 years” and who is the go-to alarmist for Al Gore, even that James Hansen has had to admit that Madam Zaza at the Easter Show had a better record when it came to fortune telling. Even that James Hansen has now had to admit that temperatures are stable and have been for at least 17 years.
But, by gum, he has followed a dog act with another dog act.

http://www.theaustralian.com.au/business/companies/carbon-tax-will-force-jobs-offshore-rusal-chief-warns/story-fn91v9q3-1226610473575
Mr Deripaska said he could not understand why the government taxed Queensland Alumina heavily because of its dependence on coal, even though the joint venture had lower emissions than the average overseas competitor's refinery. He also cited the inconsistency of the government imposing a carbon tax while, at the state level, aged and ailing coal-fired smelters such as Alcoa's Point Henry smelter near Geelong had received taxpayer funds to continue operating.

Where the Money Goes