David Rose, writing for the UK Mail on Sunday talks of the recent revelation that the rise in temperatures has stalled.


The Great Green Con no. 1: The hard proof that finally shows global warming forecasts that are costing you billions were WRONG all along

No, the world ISN'T getting warmer (as you may have noticed). Now we reveal the official data that's making scientists suddenly change their minds about climate doom. So will eco-funded MPs stop waging a green crusade with your money? Well... what do YOU think?

The Mail on Sunday today presents irrefutable evidence that official predictions of global climate warming have been catastrophically flawed.

The graph on this page blows apart the ‘scientific basis’ for Britain reshaping its entire economy and spending billions in taxes and subsidies in order to cut emissions of greenhouse gases. These moves have already added £100 a year to household energy bills.

It also blows apart the basis for Australia's Green Gillard Government's Economy Crippling carbon tax and the need for Australia's Liberals to have a $3.2 billion plan to mitigate vital to life carbon dioxide.

The Australian Securities & Investments Commission reports there were 10,632 company collapses for the 12 months to March 1 - averaging 886 a month - with the number of firms being placed in administration more than 12 per cent higher than during the global financial crisis.
While the high Australian dollar is seen as the main factor behind manufacturing closures, experts say the carbon tax is adding to increasing cost burdens for many firms struggling to stay afloat.
Steve Lewis and Phil Jacob of The Sydney Daily Telegraph reports:

THE carbon tax is contributing to a record number of firms going to the wall with thousands of employees being laid off and companies forced to close factories that have stood for generations.

Rising energy bills caused by the Government's climate change scheme have been called the ``straw that broke the camel's back'' by company executives and corporate rescue doctors who are trying to save ailing firms.
New data from the corporate regulator reveals insolvencies have hit a record high over the past 12 months, led by widespread failures in manufacturing and construction, which accounted for almost one-fifth of collapses.

Labor persists with the broken election promise of (There will be no) carbon tax and although the Liberals say they will reverse the  carbon dioxide tax, they still have a policy of which they say:

Our policy will cost $3.2 billion over 4 years, while the ETS costs $40.6 billion over the first four years. (link)

As the man-made catastrophic global warming (CAGW) hypothesis has been falsified (link and link), at the next election the party to vote for is the NO CARBON TAX Climate Sceptics (NCTCS). 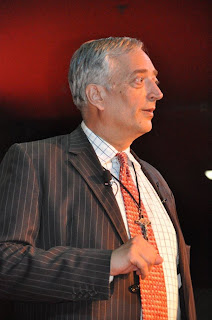 The Historic Parramatta Town Hall has been secured for Lord Christopher Monckton on Wednesday the 20th of March 2013; starting from 7pm.

Lord Monckton's mission and message is to be preached in front of the longest standing Church in Australia:- St. John's Cathedral Parramatta.

~It is not as grand as Brisbane's new Gothic Cathedral of St. John; but it is where the Australian Nation began, under British Rule.

{Where the first Fleet landed in Sydney Cove, there was no river, nor sufficient arable land, to ensure the survival of the new colony}.

It is only our younger generations and immigrants, who will not remember having to stand in the Picture Theatres around Australia, for "God Save The Queen", at each Movie Session.

How fitting is it now, to have a member of the British Aristocracy trying to alert us to the Scams of UN AGENDA 21 and the Cult of Carbon Dioxide, and the resulting human wreckage; ~the scourge of Armageddon itself; ~the last ditched efforts of the Wicked, trying to keep mankind in bondage, and to reduce us all back to slavery.

Without naming some of the Wicked, or even getting critical of their agent provocateurs; suffice it is to say, that the current Prime Minister was encamped in this same suburban area with her entourage, just days before.

So, for all those Sydney-siders who faithfully caught "buses and Convoys to Canberra" in the past, to gather and rally against this Regime; now is the opportunity and the privilege to be at this special event. Indeed an historic event and opportunity, to inspire the choices and decisions necessary for this Nation, in this election year.

This presentation by Lord Christopher Monckton is sponsored by the NO CARBON TAX Climate Sceptics party.

Here is a taste of Lord Monckton's Vital Messages, now on YouTube; {from Wagga Wagga}:--

Using the IPCCs own figures, Lord Monckton calculates the cost of climate action versus doing nothing.  It shows that it worthless to try to reduce CO2 no matter whose facts you use.