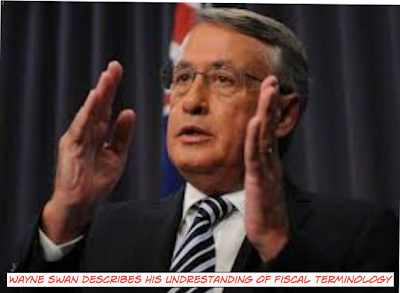 In a recent interview with 7:30’s Leigh Sales, Treasurer Wayne Swan said “nominal growth has fallen below real growth. And what that has done is that it's really hit our revenues…” (link)

That's a funny statement to make; Official Government budget papers show that revenues during the Labor Party’s present term in Government  have increased by 170%  (Australian Government Revenue for 2012-13 is expected to be $376.1 billion (link) whereas  Total accrual revenue in 2005-06 of $221.9 billion (link))

Sorry Treasurer, you don’t write down revenues, you write down assets: (Investopedia)

Reducing the book value of an asset because it is overvalued compared to the market value. Write-downs are typically reflected in a company's income statement as an above-the-line expense, thereby reducing net income

Leigh Sales twice asked Treasurer Swan whether he would be changing tax rules about superannuation. First he gave an non-answer and then “Well I'm not going to engage in speculation about the Budget.”(Link)

LEIGH SALES: Can people be confident if they've made decisions about their superannuation based on what the rules have been so far, that they're going to be OK and not have to deal with things that change underneath them?


LEIGH SALES: That's not quite addressing their concern that things may be about to change?

Is (or was) this man the World’s Greatest Treasurer?

In September, 2011 left leaning ABC radio’s AM announced: “The Federal Treasurer Wayne Swan has been named the world's best finance minister for 2011.”

This was follow by Crikey (link) quizzing people on the award.

An example is this back-handed compliment:

Michael Knox, director of strategy and chief economist at ABN AMRO Morgans, does not agree: “I see that Wayne Swan has now achieved the same standard as Paul Keating. This now significantly reduces my opinion of Paul Keating.”

“I think the government responsible for Australia’s recovery from the recession is the best government in the world, the government of China. Whatever the theory of the stimulus package, the problem was that the implementation was poor as we can see by the cost over runs by the school building program.”

“Good finance ministers and treasurers have been pretty thin on the ground in recent years in the Western world, particularly in comparison to Peter Costello, who is no doubt peeved he did not receive the award.”

A quiz on Idiots in Power (link)

Q.     How did Wayne Swan save Australia from the Global Financial Crisis?

A.     He used all the money put aside by Peter Costello.


Q.     How many surplus budgets has Wayne Swan brought in?


Q.     How many surplus budgets did Peter Costello bring in?


Q.     Which Australian Federal Treasurer managed to turn a $80b surplusinto a $153b budget debt in just 3 years?

Back to our title – Old King Coal – The World’s Greatest Tresasurer.

The Australian Coal Association explains the importance of Coal. (Link)

China is our second largest market with 42.4 million tonnes in 2009-2010, almost double the previous year.

Together these five countries accounted for 88% of all black coal exports with a further 28 countries taking the remaining 12%.

Demand for coal in China and India is expected to increase dramatically over the next decade in line with these countries’ projected need for coal for energy and manufacturing.
Australia was the only one of the world’s 33 advanced economies to grow in 2009 during the worst global recession since the Great Depression.

The principal reason for this was our continued coal exports. The importance of coal in the economy is also evident in its growing share of Gross Domestic Product.

The principal reason for this was our continued coal exports.


Let me repeat: Australia was the only one of the world’s 33 advanced economies to grow in 2009 during the worst global recession since the Great Depression.

The principal reason for this was our continued coal exports.

A footnote to coal from The Washington Times (link):

Coal by 2030 will be the most widely used fuel worldwide as developing countries electrify burgeoning cities and rural areas where billions of people have had no or little access to power, according to the International Energy Agency.

The U.S., Europe and Japan may debate the merits of coal versus nuclear, natural gas, wind and other cleaner fuels, but for developing countries that have considerably less income and wealth to pay for power projects, those more-expensive sources of power are rarely realistic alternatives. For this vast swath of humanity, coal remains the main or only alternative to improve their lives with a reliable energy source.