Scientists have been studying solar influences on the climate for more than 5000 years. Chinese imperial astronomers kept detailed sunspot records, and noticed that more sunspots meant warmer weather. In 1801, celebrated astronomer William Herschel, the first to observe Uranus, noted that when there were fewer spots the price of wheat soared. He surmised that less “light and heat” from the sun resulted in reduced harvests. It is therefore perhaps surprising that Professor Richard Muller (University of California, Berkeley) recently claimed that “no component that matches solar activity” could be identified in his newly reconstructed BEST global land temperature record. Instead, Professor Muller said, carbon dioxide controls our changing temperature.

The authors then talk of "solar radiation, which supplies Earth with the energy that drives our weather and climate," and mention that "A strong sun-climate relationship requires mechanisms to exist whereby our sun can both cool and warm the Earth."


Recent work by NCAR senior scientists Drs. Harry van Loon and Gerald Meehl has also emphasized a physical relationship between incoming solar radiation and temperature. These scientists argue indirectly that, in testing for this relationship, daytime maximum temperature is the most appropriate criterion to use to characterize the temperature.

The reason why many previous studies have failed to identify a strong sun-temperature link may be that they have used the daily average temperature to represent the temperature component of the relationship. This can easily introduce erroneous complications related to the part of each day when the sun shines on the other hemisphere and darkness prevails at any particular site being studied.

Nevertheless, recent analyses indicate that even small changes in incoming solar radiation can have a strong effect on Earth’s temperature and climate. In 2005, research by one of us (Soon) demonstrated the existence of a strong correlation between solar radiation and the anomalies in average temperature for the Arctic over the past 130 years (above right).


Willie Soon has been researching the relationship of solar radiation and Earth’s climate at the Harvard-Smithsonian Center for Astrophysics for the past 22 years. William M. Briggs is a meteorology-trained statistician and former associate editor of the Monthly Weather Review. Bob Carter is author of the book Climate: the Counter Consensus, and an Emeritus Fellow of the IPA. 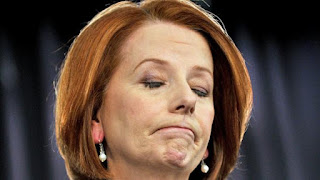 During an on-line Q and A session in  July last year (LINK) PM Gillard was quized on the tax she had said we would not have.

The European carbon tax market has a crisis with prices falling below A$6.30 (Link).

As to PM Gillard's "200 million Chinese" living with a carbon tax, it had not started when she made that statement. Was she misinformed? Or was it yet another lie?


China will wait until after this year to introduce a tax on carbon, deferring to concern that economic growth might suffer, a government researcher said.

The nation eventually expects to introduce a levy of 5 yuan to 10 yuan (80 cents to $1.61) per ton of carbon, Jia Kang, head of research at the Ministry of Finance, said in Beijing yesterday. The tax, proposed in China’s latest five-year plan, was intended to apply to carbon emissions from fossil fuels, KPMG International said in a May 2011 report.

The carbon tax is “still in internal discussions,” as there is “obvious opposition,” Jia said without identifying the opponents.

There is a distinct difference between Australia's $23 tonne (rising to $29 tonne) and Europe's $6 or China's proposed $1.60 tonne.


NSW Environment Minister Robyn Parker has not met the state's climate change council - a group set up to advise the government - for more than a year, despite repeated pleas during the recent heatwaves and floods.


He goes on to say that the climate change council was set up in 2008 to provide "impartial" advice....

A look at the members shows us just how "impartial" their advice will be:

Maria Atkinson has the following in her bio:


Global Head of Sustainability, Lend Lease CorporationA Life Fellow, co-founder and founding Chief Executive Officer of the Green Building Council of Australia, Maria Atkinson is a member of the Australian Building Codes Board, the City of Sydney Design Advisory Panel and the Federal Department of Climate Change and Energy Efficiency Stakeholder Group.  Internationally recognised, Ms Atkinson is also Chair of the United Nations Environment Programme Sustainable Buildings & Climate Initiative, Co-Chair of the World Economic Forum's Global Agenda Council on the Future of Sustainable Construction, and a member of the Singapore Building and Construction Authority's International Panel of Experts for Sustainability in the Built Environment.
Ms Atkinson is a strong advocate for a simple, cost-effective way of enabling accurate benchmarking and reporting of carbon emissions in the non-residential building sector, and advocates the use of a direct price on carbon to drive long-lasting, fast emissions reductions across the sector.

John O'Connor is Chief Executive of the advocacy group, the Climate Institute.

All the above are AGW propagandists - several other members of the "impartial" committee may be impartial.

What does this "impartial" panel say?

"We do now have a malaise where the politics is preventing investment in renewables, or in coal or coal seam gas for that matter,'' said a member, John Connor.

Stall the very partial NSW Climate Change Council as long as you can, Minister Parker!

Monckton - ‘Your property could be nationalized by stealth’

‘Your property could be nationalized by stealth’ – Monckton

Lord Monckton, on his third Australian speaking tour, says flawed science is no basis for State and local authorities to take away property rights by stealth on the pretext of preventing global warming.

At 7.30 pm on Friday, March 15, Lord Monckton will tell a public meeting at the Cairns State High School’s hall that every home-owner and fisherman and farmer is now at grave risk.

On his extensive tour he has been dismayed at the number of environmental regulations that are stamping out the rights of householders, farmers, miners and business people to go about their business unhindered......Änd the common reason (er....excuse) is "to stop Global Warming"

In NSW he heard how Wagga farmers and the Wagga Council are losing their property rights under the UN’s little-known anti-capitalist Agenda 21 programme and the Murray Darling Basin Plan.

In coastal NSW conservation plans are being enacted so private Properties are zoned to prevent all property developments – and owners are not even being told their property rights have been taken away.

But the injustices in North Queensland have astounded Lord Monckton.

He will see how the fishing industry has been decimated by regulations including the declaration of the entire Coral Sea as a Marine Reserve.

The former adviser to Margaret Thatcher is also concerned at proposals from “Green” activists to declare all of Cape York a Wilderness Zone. This, he says, is “yet another way to steal property, prosperity, freedom and hope from the people of North Queensland”.

Then there is the Great Barrier Reef Marine Park Authority, which constantly uses exaggerated predictions of climate doom to hype up belief that CO2 threatens the Reef. Humans are increasingly excluded.

Lord  Monckton`s talk (tickets $25 at the door) will describe many cases of fraudulent science which affect the Cairns and North Queensland area, including exaggerated predictions of sea-level rise, fabricated temperature records, cherry-picked data and incorrect analysis.

He will welcome questions from the audience after his talk.

Lord Monckton drafted the 80-page scientific testimony on the basis of which the High Court in London declared in 2007 that Al Gore’s climate movie described an “Armageddon scenario” that was “not based on any scientific view”.

His famous intervention at the December 2012 Doha climate conference led the IPCC chairman, Rajendra Pachauri, to admit during a recent talk in Melbourne that the Earth has not warmed for 17 years.