The mercury is not doing what the Hobart Mercury Claims! 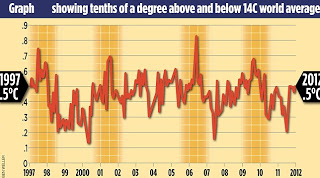 
Christopher's recent address in Hobart brought an ill-informed review in the Mercury by Philip Heyward (Link). As previously posted here, the data from HadCrut 3 and HadCrut 4 show no significant warming for 16 years. Depending on which data set is used  the lack of significant warming could be from 16 to 23 years. The UK Met Office also admitted that their has been no warming for 16 years.

How is it then, that journalist Heyward and, even worse, CEO of the University of Tasmania's Antarctic Climate and Ecosystems Co-operative Research Centre  Tony Press don't know this? Or are they still trying to pull the alarmists' trick of "Hide the Decline?"

And Dr Press is quoted as saying


"The argument of 'no recent warming' is wrong and has been debunked time and again."

Perhaps he should convey that opinion to the UN's Climate Change Chief -Railway Engineer Rajendra Pachauri, who has seen the latest data and has acknowledged a 17 year pause in global temperature rises. (link)

Dr Pachauri's views contrast with arguments in Australia that views outside the orthodox position of approved climate scientists should be left unreported.

Unlike in Britain, there has been little publicity in Australia given to recent acknowledgment by peak climate-science bodies in Britain and the US of what has been a 17-year pause in global warming. Britain's Met Office has revised down its forecast for a global temperature rise, predicting no further increase to 2017, which would extend the pause to 21 years.

The mercury is not going up, but the Mercury should hold its head in shame.
Posted by Geoff on February 24, 2013 No comments:

The NO CARBON TAX Climate Sceptics Party in association with the Lord Monckton Foundation are currently presenting a tour of NSW by Lord Monckton, Details HERE


The words: "I believe" have no place in science; the words: "I wonder" are what inspires science.