Canadian investigative journalist wrote a book exposing how much of previous IPCC assesment reports relied on studies by advocacy groups like the World Wildlife Fund and Greenpeace. She wrote her exposures in a book titled: The Delinquent Teenager who was mistaken for the world's top climate expert.

The book had 143 reviews on Amazon, 4/5 of the reviewers gave it five stars; reviews like -

Critics are blasting a draft U.N. climate change report that combines studies by advocacy groups like the World Wildlife Fund and Greenpeace alongside scientific research papers.


“You'd think that the IPCC would have learned its lesson, that it would have told its authors not to rely on these sorts of publications,” said Donna Laframboise, the head of nofrakkingconsensus.com, an investigative website skeptical of the scientific consensus on global warming.

“The report currently includes, amongst its list of references, nine separate publications produced wholly or in part by the WWF,” Laframboise told FoxNews.com. 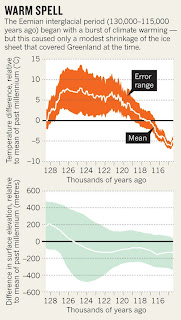 New peer reviewed paper published by Nature proposes that the surface temperature of the Greenland Ice Sheet during the Eemian interglacial (130,000 to 115,000 years ago peaked at 8 ± 4 degrees Celsius above the mean of the past millennium, followed by a gradual cooling that was probably driven by the decreasing summer insolation.


Extracting a record of the Eemian was a challenge: the core’s lowest layers had been deformed and folded by the constant movement of the ice sheet. “Of course we had hoped for a purer record,” says Dorthe Dahl-Jensen, a palaeoclimatologist at the University of Copenhagen who led the NEEM project. “But it is a fantastic record even so, and it does have all the information we needed to reliably reconstruct the Eemian climate and ice-sheet history.”

She and her colleagues painstakingly compared and synchronized the disturbed parts of their core, layer by layer, with other well-dated ice cores from Greenland and Antarctica to tease out the story. “I am very sure that we have got the picture right,” says Dahl-Jensen.


The results confirm the warmth of the Eemian climate: ratios of oxygen and nitrogen isotopes in the core show that some 6,000 years after the onset of the Eemian, local temperatures reached about 8 °C above the present-day annual average of roughly −25 °C.

But the ice sheet at the NEEM site did not get much thinner than its present 2.5 kilometres, according to the air content in the core that the team correlated with elevation.