David Karoly has served as a lead author for the IPCC. Yes, that IPCC that published the fraudulent hockey stick graph in its Third Assessment report but turned its back on it by the fourth assessment report.

Yes that IPCC that  was exposed by Donna Laframboise in her book the Delinquent Teenager.


"almost nothing we've been told about the IPCC is true."

David has authored a report for the Climate Commission titled Off the Charts: Extreme Australian Summer Heat.

"We live in a hotter world and the risk of more frequent and severe extreme weather has already increased," Prof Karoly said.

"The length, extent and severity of the current heatwave is unprecedented." (link)

Did Professor Karoly consult the UK Met Office or Australia's Bureau of Meteorology before writing the report?

The UK Met Office has admitted that there has been no global warming for 16 years and forecast no more warming until at least 2017.  From the UK Mail-on-line:


On Tuesday, news finally broke of a revised Met Office ‘decadal forecast’, which not only acknowledges the pause, but predicts it will continue at least until 2017. It says world temperatures are likely to stay around 0.43 degrees above the long-term average – as by then they will have done for 20 years.

This is hugely significant. It amounts to an admission that earlier forecasts – which have dictated years of Government policy and will cost tens of billions of pounds – were wrong. They did not, the Met Office now accepts, take sufficient account of  ‘natural variability’ – the effects of phenomena such as ocean temperature cycles – which at least for now are counteracting greenhouse gas warming.


And Prof David, is this another whopper?


"The length, extent and severity of the current heatwave is unprecedented."


The world record for the longest sequence of days above 100°Fahrenheit (or 37.8° on the Celsius scale) is held by Marble Bar in the inland Pilbara district of Western Australia. The temperature, measured under standard exposure conditions, reached or exceeded the century mark every day from 31 October 1923 to 7 April 1924, a total of 160 days. (Bureau of Meteorology)


South Australia's Government Meteorologist Sir Charles Todd's report on 1896 "Meteorological Observations Made at the Adelaide Observatory and other places 1896." 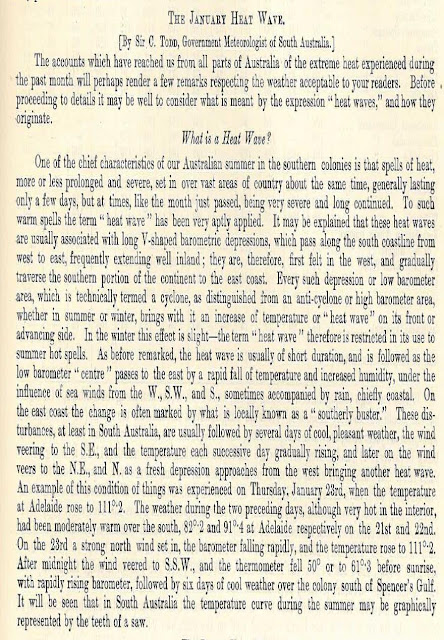 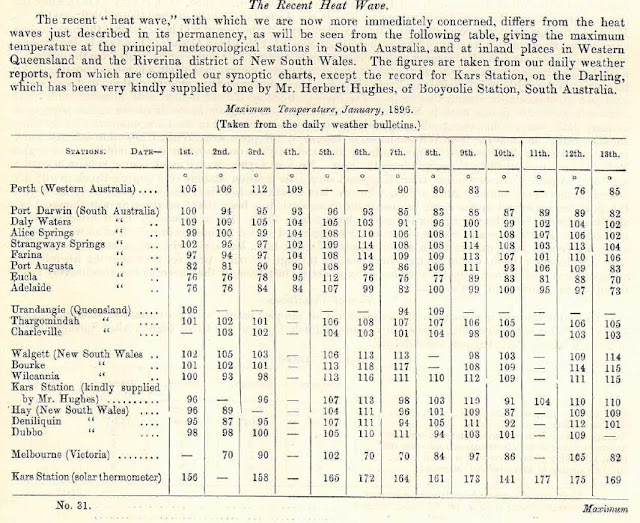 An extract from the above

One of the characteristics of our Australian summer in the southern colonies is that spells of heat, more or less prolonged and severe, set in over vast areas of the country about the same time, generally lasting only a few days, but at times, like the month just passed, being very severe and long continued.