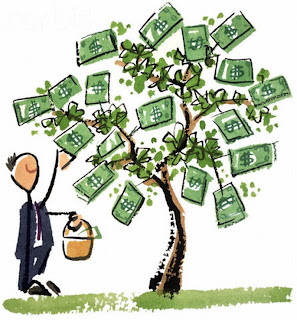 
The COP-18 environmental conference held in Doha has come and gone. A result was that the Kyoto Protocol was extended, but only after bitter debate. It strikes me that the extension of the Kyoto Protocol was a case of countries not having the courage to stop it, and not actually knowing what to do next. So the easy way out was to just extend Kyoto and also promise the developing world lots and lots of dollars for ‘climate mitigation,’ which is a sort of apology from the first world for the accusation that they messed up the planet in the first place. Whether the billions of promised dollars will really appear is another matter.

I picked up a South African magazine and read an article concerning carbon trading. The article headline was: “The Big C is a Money Tree.” There was a picture of a tree with hundreds of dollar bills hanging on the branches.

In essence the article said that people can easily make loads of money in the carbon trading business. Much of the sentiment was correct.

Consider the hamburger market. If it is easy to sell a large number of hamburgers and make a lot of money, then what happens is that a competitor joins the market, and another, and another. The result is that the quality of the hamburgers goes up and the price comes down. This is all because the natural competition forces the sellers to offer the best quality at the lowest price.

So one can ask the question: what is the basis of the carbon trading business? Well it is buying or renting fresh air. Sounds dicey, doesn’t it?

What happens is that if some company, say in Germany, wants to extend their factory, and they are going to have to produce carbon dioxide gas (CO2) in the operation of the plant, they may find that they will exceed their CO2 emission quota.

So then what they have to do is to come to a country like South Africa and look for some piece of land where they can plant some plants, to take CO2 out of the air, or they have to find some factory emitting CO2 and go there and implement some clean air technology to regularly remove some tons of CO2 from the factory’s emission. As soon as they, say, remove 10 tons of CO2 per day from some air in South Africa then they can put the same amount of CO2 back into the air in Germany, and hey presto, all is great because on balance the total CO2 that they emit into the air of the whole world balances out. Then the German company pays the South African company a lot of dollars per month to keep the South African air ‘clean’, so that the German company can put the ‘saved’ CO2 back into the air in Germany.

So the basis of the carbon trading business is to rent clean air from somebody else.

Therefore if you launch a major project to develop a new factory, and a significant part of the budget is carbon trading income, then don’t forget that renting clean air is part of the asset of the business.

If the Kyoto Protocol collapses and the clean air requirement falls away then your investment blows away in a breeze…of ‘clean’ air.

If it turns out that man-made industrial CO2 is not leading to climate change then the whole carbon market could disappear faster than a puff of wind.

(NCTCS Editor: See Defective AGW Science - if human CO2 is not the main cause of the     increase of atmospheric CO2 then AGW is wrong.

Dr Kelvin Kemm is a nuclear physicist and business strategy consultant in Pretoria, South Africa. He is a member of the International Board of Advisors of the Committee For A Constructive Tomorrow (CFACT). Dr. Kemm received the prestigious Lifetime Achievers Award of the National Science and Technology Forum of South Africa.
Posted by Geoff on January 12, 2013 1 comment: