Typhoons & Carbon Taxes; Tragic, but not our fault. 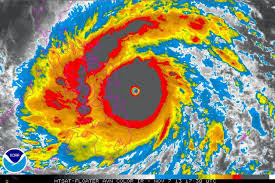 (Tragic, but not our fault.)

Another Issue of "Carbon Sense". www.carbon-sense.com. Please pass on.
A print friendly pdf of this newsletter can be found at:
http://carbon-sense.com/wp-content/uploads/2013/11/typhoons-and-taxes.pdf

The Carbon Sense Coalition today accused the UN Warsaw climate conference and some world media of callous exploitation of human suffering in the recent typhoon in order to promote their international carbon tax levelling plans.

The Chairman of Carbon Sense, Mr Viv Forbes, said that the leaders of the global warming scare campaign who are blaming the use of carbon fuels for Typhoon Haiyan should read their own IPCC scientific report which makes no such claim.

Damaging typhoons have been a fact of life in the Eastern Pacific for all of recorded history. In 1274, Japan was saved from invasion by Kublai Khan when a typhoon destroyed a huge Mongol invasion fleet. A second bigger fleet in 1281 was destroyed by another typhoon which was named Kamikaze or “divine wind” by the grateful Japanese. Typhoons were also frequent and severe during the Little Ice Age around 1670.

Living on the flood plains and beaches around the huge Pacific Ocean is pleasant and productive for billions of humans for most of the time – generally the climate is mild, the rains are regular, the soils are fertile and food is abundant from land and sea. But every sea-side settlement must expect to suffer huge damage or destruction some time from a rogue cyclone, typhoon, hurricane or tsunami. Moreover, as a “Ring of Fire” also circles the Pacific, they can also expect the occasional severe earthquake or volcanic eruption.

To promote the belief that carbon taxes and related handouts will change the natural reality of cyclones and typhoons is no better than modern witchcraft in which western consumers are to be sacrificed on the climate scare altar.

The UN/IPCC frequent flyers attending the Warsaw gabfest should have stayed home and donated their time, energy, air fares, hotel bills, croissants and expense accounts to helping the real victims.

Nowhere in the world are cyclones, hurricanes, typhoons or tornadoes powered by the tiny trace of well-dispersed, invisible carbon dioxide in the atmosphere.

Anyone who studies storms can observe that the energy of tropical storms comes from localised heat and moisture. Thunderheads are not composed of carbon dioxide – they are composed of water in its various forms. Water is unique in the atmosphere in that it can change phase from a gas, to a liquid, or a solid all within the temperature ranges found on Earth’s surface. Every phase change generates or absorbs considerable energy. It is these latent energies of evaporation and condensation that sustain storms. All such processes are driven by the energy of the sun.

Storms form in areas of sun-heated low pressure where there is a plentiful supply of warm moist air over the sea and masses of cooler high-pressure air over the nearby land. A mega-storm grows as air rushes from areas of high pressure to areas of low pressure. It starts spinning because of the rotation of the earth. This low-pressure vortex is then maintained by the release of latent heat as moisture in the rising air condenses into rain and hail.

Carbon dioxide plays no part in any of these storm processes. Even if it were to cause some global warming, it would tend to warm the poles, reducing the temperature contrasts that power major storms. However, average land and sea temperature has not risen for 16 years; nor has the frequency or intensity of destructive storms.

Clearly, typhoons and cyclones have not been stopped by Australia’s carbon tax. They are tragic, but not our fault. Arguing that a carbon tax and global wealth redistribution are required to prevent typhoons and cyclones is just nonsense. Using this mad logic, it would make more sense to have a “hydrogen tax” on emissions of steam and water vapour (H2O) in an equally futile attempt to remove the real driving energy from tropical mega-storms.

Intense Typhoons On The Decline:
http://notalotofpeopleknowthat.wordpress.com/2013/11/14/most-intense-typhoons-on-the-decline/

Haiyan is 58th Super Typhoon since 1950 to reach central pressure of 900 mb or lower:
http://www.climatedepot.com/2013/11/17/meteorologist-dr-ryan-maue-demolishes-claims-that-typhoon-haiyan-was-strongest-storm-evermaue-fact-haiyan-is-58th-super-typhoon-since-1950-to-reach-central-pressure-of-900-mb-or-lower-from-h/

Global Warming not to blame for Typhoon Haiyan:
http://blogs.spectator.co.uk/coffeehouse/2013/11/global-warming-isnt-to-blame-for-the-disaster-in-the-philippines/

No significant trends in cyclone frequency or intensity. Increasing damage is due to increasing population and development:
http://models.weatherbell.com/weinkle_maue_pielke.pdf

Tragic, but not our fault:
http://canadafreepress.com/index.php/article/59209

Anyone who looks carefully at radiation science and the thermodynamics of carbon dioxide in the atmosphere will come to the conclusion that carbon dioxide alone cannot cause a global warming crisis. Even sensible warmists know this. There is a warming effect, but it is tiny and getting smaller as carbon dioxide increases.

So warmists invoke “positive feedbacks” or multipliers, which they say will tip earth into runaway global warming.

Their theory is that an initial small warming will increase evaporation of water from the oceans and methane from the tundra. These two “greenhouse gases” will then cause more atmospheric warming, progressively expelling more carbon dioxide from the warming oceans. “Oceans will boil” claimed warmist leader James Hansen. They also claim that after a postulated “tipping point”, Earth will never recover its balmy equilibrium.

Moreover, the long history of the Earth reveals periods when temperatures and carbon dioxide levels were far higher than today but life flourished and Earth always returned to cooler times – sometimes an ice age. Earth’s climate oscillates like a see-saw, with periodic changes in cycles in the sun and the solar system keeping the see-saw slowly oscillating.

There is no evidence supporting the theory of a global warming tipping point.

Today we live in a comfortably warm climate cycle but in the grand climate cycles, the barren hungry ice is always waiting its turn. Global cooling is a far greater danger to life on Earth than global warming.

Climate Forcings and Feedbacks. It is a well buffered and balanced system:
http://heartland.org/policy-documents/research-commentary-forcings-and-feedbacks

Even the BBC feels the chill:
http://www.bbc.co.uk/blogs/paulhudson/posts/Real-risk-of-a-Maunder-minimum-Little-Ice-Age-says-leading-scientist

Finally, modern man (and woman) practicing how to cope with the ice:
http://www.youtube.com/embed/xKy2lLNQYrI?rel=0

Petition.
Don’t forget this petition. Please sign and help it along:
http://www.ipe.net.au/ipeframeset.htm


The Consensus Fractures, and it’s now all about Money and Power.

The Global Warming Scare started when some rich western elites in their deep green bunkers saw it as a way of curbing what they saw as the wasteful and unsustainable life-style of western consumer society (that is, those other people). If they managed this “crisis” properly, they could make great strides in their long-held goals of controlling national and local governments, destroying private property and introducing an unelected elite with access to a world system of taxation and redistribution.

But, voters, consumers and scientists are destroying this green dream:
The climate scare is no longer about the realities of the climate, but about money – continuing subsidies for green energy, more funds for climate research and conferences, international compensation for natural disasters, the soaring costs of electricity, and the collapse of carbon trading.

All we have to show for this spending are massive computers producing worthless forecasts, thousands of wind and solar plants producing trickle-power intermittently, millions of green jobs producing propaganda, many overseas trips for the climate bureaucracy and not much else.

Imagine if this deluge of money had been spent on flood-proof railways, roads and bridges, cyclone-proof power supplies, drought-proof water supplies, fire-fighting equipment, community shelters for fires, floods and cyclones, emergency helicopters and helipads and so on.

Instead, this money has been frittered away so that all western governments are in now financial distress, and soon will be unable to help even their own people.

At the same time, the same people behind the climate scare are manning Shut-the-gate movements all over the western world. Their prime target has been exploration for oil, coal, shale gas, coal seam gas and uranium, but they have also denied access to vast tracts on land and sea for exploration, mining, farming, forestry, fishing, water supply, railways, ports and pipelines.

Not since the days of the Aztecs has a priesthood inflicted such lethal sacrifice on its own people. They have vastly increased the costs to be borne by taxpayers and consumers, while at the same time crippling those industries that are the primary generators of real wealth.

Maybe some future historian will write a massive tome titled “The Decline and Fall of Western Civilisation – how a green-robed priesthood sapped a vibrant society of its desire and ability to feed and defend itself”.