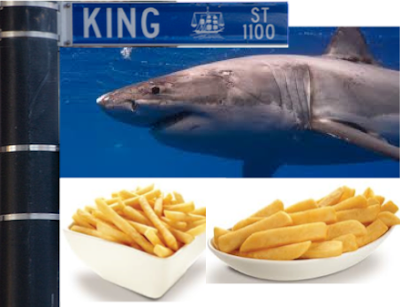 Damon Cronshaw’s article about rising sea levels drowning the CBD of Newcastle had its amusing side with a shark meandering up King Street. However, given the chronic failure of predictions by the Intergovernmental Panel for Climate Change [IPCC] there is probably an equal chance of that shark getting a speeding ticket as there is King Street having enough water covering it to allow the shark to swim up it.

The IPCC has just released its fifth report, AR5. Chapter 13 of AR5 deals with sea level rise. Chapter 13 predicts a sea level rise of between 0.26 and 0.97 of a metre by the year 2100. So even if the worst prediction by the IPCC of 0.97 metres comes true the shark will lose a lot of bark from the road surface as it swims up King Street.

Firstly there is steric sea rise which is based on a warming sea and thermal expansion of the water. Chapter 13 of AR5 is very confident there is thermal expansion. However it is indisputable that the sea surface has COOLED since 2003. 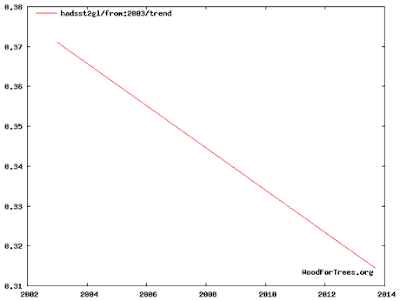 And the ocean down to 700 metres has warmed less than 0.01C since 2003 which is statistically insignificant from zero. 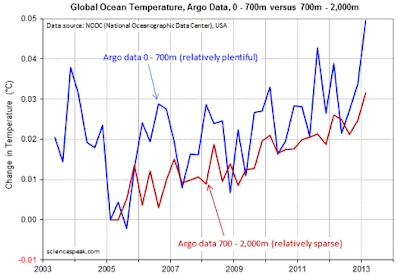 The IPCC claims the missing heat is at the ocean bottom but has yet to explain how the heat can go past the top of the ocean without leaving any trace of warming.

The second way the sea level can rise is through eustatic rise. Eustatic rise is by extra water coming into the ocean. The main source of fresh water into the ocean is from the world’s biggest sources of freshwater, Greenland and the Antarctic.

New research from 2012 shows both the Greenland and Antarctic ice sheets have decreases in ice in some regions matched by ice increase in other parts.

So it appears the sea level rise can’t be from either warming or more water.

The final way sea level can rise is through isostatic processes or movement in the land itself. But this process has nothing to do with climate.

Given this can we be sure sea level is rising. Two definitive studies of sea level were done in 2011. The first by Houston and Dean looked at global sea level and concluded the rate of sea level rise was decreasing not increasing as Chapter 13 of AR5 predicts.

The second study was by Australian researcher Dr Phil Watson from the NSW Department of the Environment. Dr Watson also concluded that sea level rate of increase was declining and there was no sign of the acceleration in sea level rise predicted by the IPCC.

The gauges have been in use for varying periods of time.

In other words the only way our shark is going up King Street is as fish and chips.
Posted by Geoff on October 09, 2013