Has Man-made global warming been disproved? A Review of Recent Papers.

Anthony Cox and Jo Nova
Introduction
Climate Change was described in 2007 by the soon to be, briefly, Australian prime Minister, Kevin Rudd, as the “greatest moral, economic and environmental challenge of our generation.” By Climate Change Rudd meant anthropogenic global warming, or global warming as it was originally described by Al Gore.
Government attempts to ‘solve’ global warming are framed by hyperbole and urgent policies. These policies involve the expenditure of vast amounts of money1,2 and are justified because we are told “The science is settled”3.
Science is never settled. Richard Feynman said [The Meaning of it All, 1999]:
The exception proves that the rule is wrong. That is the principle of science. If there is an exception to any rule, and if it can be proved by observation, that rule is wrong.
The dominant argument for global warming contradicts Feynman’s “principle of science”. This dominant argument is that a majority of scientists, a consensus, support it4. But as Feynman notes consensus is a false proof of a scientific theory because only one contradictory bit of empirical evidence is sufficient to refute that theory.
In fact not one but seven recent peer-reviewed papers have revealed what would seem to be fatal flaws in global warming. Global warming says there has been an increase in the global average temperature since the mid-20th century and its projected continuation. According to the Intergovernmental Panel on Climate Change [IPCC] “most of the observed increase in globally averaged temperatures since the mid-20th century is very likely due to the observed increase in anthropogenic greenhouse gas concentrations.” [AR4, Working Group 1, page 10].
For purposes of this essay then global warming is the increase in global average temperature primarily caused by human emissions of greenhouse gases, primarily carbon dioxide [CO2].
The seven papers discussed use different methods to critique global warming but are all based on empirical data and are in rough agreement that any increase in global average temperature due to a doubling of CO2 is more likely to be about half a degree than the 3.26 degrees determined by the IPCC [AR4, Box 10.2]. The extent of the change in global average temperature to a doubling in CO2 is known as the climate sensitivity [see Figure 8].
A forcing is a factor external to or introduced to the climate system which affects, for a period, the radiative balance at the Tropopause, the boundary between the Troposphere and the Stratosphere. The IPCC recognises 2 main types of forcings; greenhouse gases, the most dominant one being CO2, and solar radiation. A feedback is a change in another quantity in the climate system as a response to a change in a forcing. The IPCC assumes that an increase in forcing from an increase in anthropogenic CO2 causes a feedback by an increase in water vapour [AR4, FAQ 1.3]. This process is measured by the change in global average temperature. However, as some scientists note, the distinction between a forcing and a feedback is not clear:
However, disadvantageously, including non-instantaneous processes clearly blurs the distinction between forcing and feedback as there is no longer a clear timescale to separate the two; further including these processes in the forcing incorporates more uncertain aspects of a climate models response [Forster et al., 2007].5
The following papers clarify this uncertainty between forcings and feedbacks and show that the global warming science is not clear about the distinction or effects. The papers show the IPCC assumptions about the role of CO2 and water vapor, particularly in the form of clouds, are incorrect and that the IPCC conclusions about climate sensitivity are both exaggerated and wrong. In doing so, these papers also vindicate Feynman’s maxim.

1      Lindzen and Choi –The Earth has a safety release valve 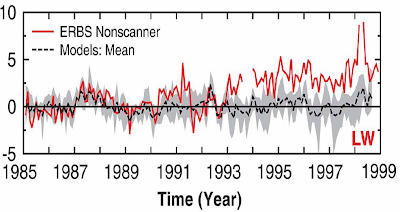 From Wielicki, B.A., T. Wong, et al, 2002: Evidence for large decadal variability in the tropical mean radiative energy budget. Science, 295, 841-844.
If global warming is going to happen it will be due to feedbacks. If the feedbacks are positive it means that as the world warms, atmospheric conditions would have to change to keep even more of the sun’s energy inside our system. But Richard Lindzen and Yong-Sang Choi show that as the world warms Earth’s dynamic system changes to let more of the infra red or long-wave energy out to space [LW from Figure 1]. It’s like a safety release valve. This means that the system has negative feedbacks (like almost all known natural systems). The changes dampen the effects of extra CO2. If there is no net amplifying positive feedback there is no catastrophe. Because Lindzen & Choi are looking at long-wave radiation leaving the planet [outgoing long-wave radiation], this is a way of assessing all forms of feedbacks at once. We can’t tell which part of the system is responsible: clouds, humidity, ice-cover or vegetation, but we know the net effect of all of them together is that when the world warms, more energy escapes from the planet.
Their research was first posted in 20097 and updated in 20108 as a response to earlier criticisms. In the 2009 paper Lindzen & Choi measured changes in the outgoing long-wave radiation leaving from the top of the atmosphere during periods that the world warmed. Their findings were a direct contradiction to global warming because they showed that increased CO2 did not block outgoing long-wave radiation. With no blockage the level of available energy in the climate system also did not increase. With no increase of available energy there was no energy to cause positive feedbacks and increase temperature.
Kevin Trenberth, a leading climate modeler, criticized the first paper. Those criticisms concerned the extent of satellite data used by Lindzen & Choi, their concentration on the tropics and various statistical methodologies. All of these complaints were addressed by the subsequent paper. They still found that outgoing long-wave radiation increased as the world warmed, which was different to what all the models predicted.

In a 2007 paper Roy Spencer and Danny Braswell undertook empirical measurements of cloud radiative forcings which are a net result of blockage by clouds of solar radiation coming in to the atmosphere [cooling] and blockage by clouds of long-wave radiation leaving the atmosphere [warming]; they concluded that
“the net radiative effect of clouds…is to cool the ocean atmosphere system during its tropospheric warm phase and warm it during its cool phase.” 9
That is, clouds moderate or dampen temperature movement in either direction.
Spencer & Braswell’s papers in 200810 and 201011 took a different approach to Lindzen & Choi. Spencer & Braswell looked more closely at the nature of feedbacks and forcings and the difficulty of putting a value on feedbacks. The IPCC models assume that clouds change in response to temperature, so they are a “feedback” [AR4, WG1, 8.6.3.2]. But as Spencer & Braswell show in their 2008 and 2010 papers clouds can be a forcing factor as well. This means that if something other than temperature affects cloud cover (like changes in ocean currents or air circulation) the change in clouds would then force the temperature to change.
The latest IPCC report acknowledges that the models don’t simulate clouds well and that’s where the main uncertainties lie. If clouds are not just a forcing in their own right, and provide negative feedback [by shading the earth] that would seriously undermine the premise of global warming. This point is illustrated by two other recent papers.
The first is a report by The Climate Process Team on Low Latitude Cloud Feedbacks on Climate Sensitivity [CPT] 12. CPT found “strongly negative net cloud feedback” in a warming world. Utilizing the climate models from NCAR, GFDL and NASA, CPT found this negative feedback concentrated in the Tropics.
Similarly Allan 201113 based his study on cloud “radiative effect” in the Tropics and concluded a “net cooling of the climate system” from clouds because solar blocking, cooling, was greater than long-wave blocking, warming. However unlike CPT, Allan did not regard this cooling as a feedback since the cloud cooling was not a response to temperature.
Spencer & Braswell provide proof that it’s very difficult to find definitive feedback signals in a dynamic system that is never at equilibrium. The only feedback they can calculate in their 2008 and 2010 papers is negative and means a climate sensitivity of about 0.6 °C for a doubling of CO2, though it’s only applicable over short time-frames. They show the near impossibility of establishing climate sensitivity over long time frames. But if climate sensitivity to CO2 is as low as they find, and dwarfed by potential cloud forcing, it would mean no postponed effect from CO2. We have had all the effect there is and there will be no stored heat lying dormant to cause future climate change. This would explain Trenberth’s concern, expressed in the CRU e-mails that the pro-global warming scientists “can’t account for the lack of warming at the moment and it is a travesty that we can’t”.
Spencer & Braswell’s 201114 paper confirms the difficulty in distinguishing cloud feedback and forcing. They also find the global warming models have substantially overestimated the climate sensitivity due to their lack of understanding of this distinction. One of the reasons that the models have failed to distinguish the effect of clouds on temperature is the difference in time it takes for the radiative effects of temperature and clouds to occur in the system; temperature effects are immediate while those of clouds take some months as Figure 2 [Figure 3 from Spencer & Braswell 2011] shows.
Figure 2 Spencer & Braswell 2011 has received considerable vitriol from the global warming science. This is unwarranted because this science concedes it has a lack of understanding of clouds. Spencer & Braswell have offered an explanation of clouds strongly correlated with and consistent with observations. The criticism of them would seem, therefore, to be based on preserving the global warming theory rather than answering Trenberth’s concern.