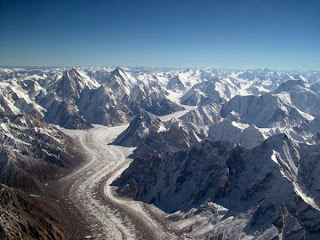 How many times are we told that Glaciers are retreating? maybe there is some cherry picking by the alarmist hockey team. A new Peer Reviewed Paper published by  Arctic, Antarctic, and Alpine Research and reported by CO2 Science. - Expanded and recently increased glacier surging in the Karakoram.


Background
As background material for their enlightening study, the authors write that "the Karakoram mountains of Pakistan, India, Afghanistan, and China contain some of the largest non-polar glaciers in the world," noting that they "exist at high altitude (~2500-8600 meters above sea level), and provide a crucial source of water for nearby communities." But are they growing or shrinking, in this supposedly rapidly warming world of ours? That is the question that is on the minds of the inhabitants of those "nearby communities" that depend upon them for their water.

What it means
In concluding, Copland et al. reiterate that contrary to what is often claimed about many of earth's mountain glaciers by the world's climate alarmists, "it is evident that glacier surging is more extensive than previously reported in the Karakoram and that the number of glacier surges has increased recently," driven, as noted above, by positive mass balances.