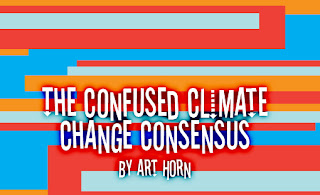 Art Horn writes in the Energy Tribune of "The Confused Climate Change Consensus:"


Let’s set one thing straight from the get go. The data from all of the sources of earth’s measured average global temperature clearly show that there has been a pause in global temperature increase since 1998. People who claim otherwise simply don’t look at the data or believe someone who wrote a story that said warming is accelerating and it’s really, really bad. Don’t trust me on this, look for yourself.

He says that the Alarmists have now decided to focus on "extreme weather events." If they keep insisting that there is a consensus, surely they don't need anymore research funding.

The IPCC in a recent summary doesn't escape criticism from Mr Horn. Nor does Richard Muller's BEST study recently covered on this blog -HERE, here  and here.


Real world temperature data shows that the warming of the earth’s average temperature that started in the mid 1970s stopped near the turn of the millennium. The years have progressed and warming has not resumed as predicted. As a direct result of this the government funded university system and the radical environmental movement climate doom industry is having big problems figuring out how to keep the fear alive. There appears to be a growing confusion among some of the world’s most prominent climate scientists and the IPCC as to just what is going on.
Some say it’s warming, some say it’s not. Some say global warming is causing extreme weather right now, some say it’s not going to happen until we’re nearly halfway through the 21st century. It’s time for these scientists and the IPCC to fess up to the fact that they really don’t know what is going on and that there is no “overwhelming consensus” as to what causes climate change. The implications of coming clean on this confusion are massive. Our energy policy and future prosperity are being shaped by fear of man made global warming. If the “experts” aren’t sure of what’s happening, how can we make sound, multi-trillion dollar, decisions about what is the BEST path to insure plentiful and affordable energy in the future? Read here. Map source (click to enlarge).
Despite the bogus claims of the UN's bureaucrats and the IPCC Climategate "scientists," the polar areas of the Northern Hemisphere have had warmer climates prior to the 20th and 21st centuries.
There is a vast body of research and empirical evidence confirming that the Arctic regions, and other parts of the globe, were indeed warmer during both the Roman and Medieval eras. In fact, global warming, cooling and climate change are natural events that never cease - that is irrefutable, unequivocal climate reality.
A peer-reviewed study by Perner et al. just added to that mountain of evidence confirming the robust warming of the Greenland area prior to the the modern era.

The unique warmth of the Roman Warm Period at Disko Bugt is also supported, in the words of Perner et al., by the "relatively high and stable air temperatures over the Greenland ice cap (Alley et al., 1999) and is associated with enhanced meltwater production as demonstrated in sediment core records from Ammarilik fjord, West Greenland (e.g. Moller et al., 2006)," as well as by "findings from Jennings et al. (2002), who report a warming within the East Greenland Current on the East Greenland shelf from c. 2.1 to 1.4 ka BP." Thus, for this particular part of the planet (and for most of the rest of the world as well), it can be seen that multi-century cycling of climate between relatively warmer and cooler conditions is quite normal. And it can thus be appreciated that 20th-century global warming was only to be expected to occur when it did, and that it could reasonably be expected that the region may warm even more before cooling again, for it still has a ways to go to equal the warmth of the Roman Warm Period or even the Medieval Warm Period, which in many locations was also warmer than it is currently.


Thanks to Marc Morano and Climate Depot.
Posted by Geoff on December 02, 2011 No comments:


One interesting phenomenon of the 2012 race has been the disappearance of global warming as a campaign issue. Not surprising among the Republicans, but not even President Obama is talking about it.

When President Obama was running during more flush economic times, he promised to raise everyone’s power bill in order to save the planet. In an interview with the San Francisco Chronicle editorial board on January 17, 2008, President Obama stated that, “Under my plan of a cap-and-trade system, electricity rates would necessarily skyrocket.” Any such utterance today would be political suicide.

Even this year’s worldwide confab of climate change zealots and anti-growth fanatics in Durban, South Africa is very low key. Representing the U.S. at the conference is Todd Stern, the State Department Special Envoy for Climate Change (Todd Stern is an able public servant — they should give him a job where his talents could be put to good use), and Jonathan Pershing, the Deputy Special Envoy for Climate Change. Expect a dry written statement from the Obama administration, with empty phrases like “progress made” or “a deepened understanding among nations is developing.”

At least there is common sense somewhere in the world, while even as the item is being written, at the Labor Conference PM Gillard is being cheered for introducing a carbon tax against the wishes of the Australian people.
Posted by Geoff on December 02, 2011 No comments: 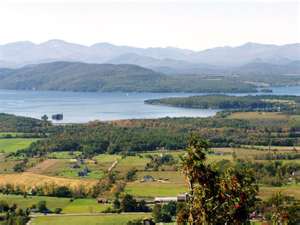 In Australia, The Green Gillard Government forced a carbon tax on the people against the vote and the will of the populace. Now it seems that the people of Charlotte, Vermont are having a field of unwanted solar panels forced upon them.


The Charlotte Planning Commission will review on Thursday a proposal by Solar Charlotte LLC to build a solar field consisting of 345 ground-mounted solar arrays north of Hinesburg Road and west of Spear Street.

Last week, the town Selectboard voted 4-1 not to accept a proposal by AllEarth Renewables Inc. to install and maintain 14 solar trackers on Thompson's Point. That vote followed multiple hearings and comments from residents.
Solar Charlotte LLC filed a notice this month at the Charlotte town offices stating that it expects to petition the state Public Service Board for a Certificate of Public Good for its project.

It’s not bad enough these are subsidised by taxpayers, but even when people don’t want them, the attitude of the business is, too bad!
Posted by Geoff on December 02, 2011 No comments:

Silence of the ABC.

The Climate Sceptics blog pages  have reported how the BBC had scripts written by the Alarmist hoaxers. This morning on Sydney radio 2GB, Professor Ian Plimer, promoting his new book "How to get expelled from school.." said that "OUR" ABC was worse than the BBC.

I don't think the mainstream ABC has once mentioned Climategate 2, let alone Climategate 1.

However there is a small leak in the dyke of ABC misinformation on the ABC's opinion blog "Unleashed."  There is a new opinion piece by the NO CARBON TAX Climate Sceptics party's Secretary Anthony Cox.

Anthony says that the Alarmists and the Sceptics are not that far apart. Anthony analyses the latest leaked emails:


However the second release should be seen as an opportunity, not an intensification and widening of the gap between the pro and anti-AGW camp.

In legal disputes about complex matters, the parties can be obliged to prepare a Statement of Agreed Facts which acts to narrow the dispute down to its essential elements.

The latest emails reveal several issues which show the position of the email authors and the sceptics are very similar. Given this welcome convergence of opinion, a Statement of Agreed Facts can be prepared showing what aspects of AGW are essentially resolved and which issues remain in contention.

He talks of the major points:

Well worth a read and also join in the comments to support Anthony against the inevitable flow of derogatory red-ragger ABC afficianados.
Posted by Geoff on December 02, 2011 No comments: 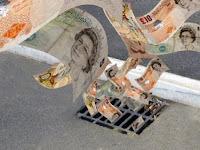 
The Government’s crisis mini-budget has confirmed that Australians will be subject to another carbon tax advertising blitz.
The Mid-Year Economic Fiscal Outlook outlines the multi-million dollar communications budgets for the Department of Climate Change and Energy Efficiency.  This is on top of the $24 million already spent on advertising.  It does not however detail the expected TV advertising campaign which the Department has admitted is under consideration and the Prime Minister has failed to rule out.

Don't forget that the Labor party has already revealed that more will be paid in compensation than the tax brings in.


In addition to the $24m spent so far on advertising, the Government is also proposing up to $102.4m on further advertising and related expenses:

Total cost = $102.4 million
And as the Prime Minister has intimated, there will be a possible new TV campaign, in addition to this $100 million.