A short time ago my brother Wes (Dr D Weston Allen) agreed to a request from the ABC’s Wendy Carlisle for an interview regarding his recently published book, The Weather Makers Re-examined.
To his astonishment, during the interview she showed no interest whatsoever in discussing the science of his book or criticisms of Tim Flannery’s book, her sole purpose seemingly being an attempt to discredit Wes with an accusation of fraud over a totally unrelated matter. He successfully foiled her attempt with factual documentation and a threat of legal action.
However, she pinpointed a reference he’d made in his book to scientist Fred Singer. Anyone in possession of the book may check his reference by the index and note that the only reason for his mention of Fred Singer was to highlight Tim Flannery’s false assertion that he (Singer) belonged to a strange church.

During her Background Briefing report (on July 17) re Lord Monckton and the Galileo Movement, however, Ms Carlisle went to considerable pains to seek to denigrate Fred Singer and to imply that Wes in his book had relied on him for scientific evidence. I find it hard to view this as other than a shabby attempt to use her interview with Wes to further discredit The Galileo Movement and Lord Monckton.
Further, on Background Briefing, Ms Carlisle erroneously criticised Lord Monckton’s claims re the IPCC’s sea level rise projections, also obviously in an attempt to discredit. Wes sent her an email exposing her error, to which she finally responded but failed to admit her mistake or offer to correct it.

The copy Wes sent to Media Watch received a prompt reply thanking him, but to date there has been no further response. Wes comments: ‘Media Watch seems keener to look over the fence than to look into their own back yard.’
Are we not right to assume that such derogatory inaccuracies should not be permitted in ABC reporting and that Ms Carlisle should be compelled to publicly retract her statements or be censured? Or does Wendy Carlisle epitomise ABC bias!?
Below is a copy of the email Wes sent to Ms Carlisle:
From: David Weston Allen
Sent: Thursday, 21 July 2011 8:55 AM
To: 'Wendy Carlisle' Cc: 'mediawatch@your.abc.net.au'
Subject: Background Briefing Error on Sea Level and Monckton
Dear Ms Carlisle
On Background Briefing, you claimed that both Christopher Monckton and Al Gore were wrong on the IPCC’s projected sea level rise for this century, that Gore’s 6m and Monckton’s 6cm were exaggerations, and that the actual IPCC figure was 20 to 50cm.  But you misrepresented Monckton, who was specifically referring to sea level rise due to melting Greenland and Antarctic ice sheets.  I hope this critical error was accidental and not deliberate.
As you can see from the attached extracts from the IPCC AR4 (2007) scientific report, these ice sheets contribute only a fraction of total sea level rise, both observed and projected.  The observed combined contribution from these ice sheets (1993-2003) was only 0.42mm/yr, which equates to just 4.2cm/century; and the IPCC’s projected contribution for this century is actually 6-13cm, depending on the particular warming scenario selected.
So Monckton was correct, far more than you were, and you owe him an apology.  If you really are interested in upholding truth and real science, rather than pushing the alarmist barrow (‘the science’) and suppressing opposition, you will also publicly correct your misleading statement.  If you want to see how complex and uncertain the science on sea level really is, you should read the entire Chapter 5 of the IPCC AR4, or chapter 15 of my book, which is more up to date.  I would happily email it to you.
. . . . .
Thank you for fairly presenting my interview and for including the further comments I made in relation to Fred Singer and his climate research, which must stand or fall on its own merits.  As you know, I mention Singer in my book (The Weather Makers Re-examined) only because Tim Flannery attempts to discredit him by falsely accusing him of belonging to Sun Myung Moon’s Unification church.  You likewise attempt to discredit his climate research by interviewing Naomi Oreskes (co-author of Merchants of Doubt) who referred to his stance on tobacco, acid rain and the ozone hole.  Naomi cannot surely believe all the exaggerated hype over acid rain during the 1980s!  Without a sceptical scientists questioning hype, we are in grave danger of falling into Lysenkoism.
I think you made yet another error when you said that Fred Singer verbally attacked Ben Singer.  Did you mean Ben Santer?  He was not beyond thuggery himself.  In an email to Phil Jones ( http://www.eastangliaemails.com/emails.php?eid=1045&filename=1255100876.txt ) Ben said: “I’m really sorry that you have to go through all this stuff, Phill.  Next time I see Pat Michaels at a scientific meeting, I’ll be tempted to beat the crap out of him. Very tempted.”
If the ABC relentlessly pursues the path of painting alarmist scientists white and sceptical scientists black, it will lose credibility with the public and sow the seeds of self-destruction.  We need neither alarmism nor denialism but realism.
Yours sincerely
Wes Allen
===================================================
Editor's Note
Further on Ms Carlisle's Accuracy in reporting see:-
Posted by Geoff on July 27, 2011 No comments: 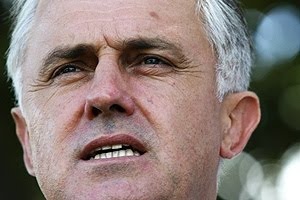 Last Friday, the Trumpeter Turnbull announced the science of climate change was robust; saying Lord Monckton of Brenchley should be exposed as wrong.

Lord Monckton of Brenchley countered with a "duel of the jaw " on TV  to which the Trumpeter Turnbull appears to have gone weak at the knees and turned into Turnbull the Timid and retreated to his cave.

I believe Turnbull the Timid should check  the Scrolls of Climate Scientists to find one which shows a 5 degree warming for a doubling of CO2 in the next century before he ventures out.

If he cannot find one, then he should renounce his belief in the false Prophets (profits) of the Goblins of Greens - who want all to give service and taxes to their Gaia God while continually  claiming we will become rich while precisely at the same time doomsday will occur (despite no doom ever coming to pass as predicted from their boastful mutterings)

Turnbull the Timid should also check the "cause of commonsense" that Monckton of Brenchley espouses which shows the plans of both Ju-Liar the Great and the Abbott of Warringah are futile even according to the science of the Scrolls of the IPCC (to which they both claim allegiance).

These Scrolls show a 5% reduction in CO2 will only reduce Global temperatures by 0.00007 degrees (the equivalent influence of a fleas fart)

Turnbull the Timid, Ju-Liar the Great and the Abbott of Warringah all appear bound by the evil spells of the Green Goblins.

Will any of them resist and restore the Kingdom of OZ?

Leon Ashby
President -The ClimateSceptics
Posted by Geoff on July 27, 2011 No comments: