State Taxes Must rise due to Carbon Dioxide Tax

In a recent post, the CEO of MacGen Russell Skelton warned that NSW state taxes would have to rise when the carbon dioxide tax takes affect.


If MacGen survives, your power bill will be greatly affected. Whether MacGen survives or not, your state taxes will have to increase. Last year MacGen returned $200 million to NSW state coffers.


Queensland Resources Council chief executive , Michael Roche said taxpayers could be forced to compensate the $1.7 billion asset writedown in state-owned coal-fired power generators.
He queried why the Bligh government had not highlighted an estimated $1bn in lost coal royalties between 2012 and 2021. "I would have thought the Queensland government would see the risk for their single largest source of revenue outside of grants from the federal government," he said.

From the same report:


Queensland Farmers Federation chief executive Dan Galligan said the extra costs would put more pressure on farm profits, and called for industry-specific economic modelling.
"The analysis is too broad to give us a clear understanding of how many farmers this will affect to a point where they may well leave the industry," he said. "That may well happen for many farmers -- that loss in profit margins, associated with a number of other issues, will be enough reason for them to leave the farm."

Recently, on this blog, we have pointed out how Marxists have penetrated the Green Movement and the  left wing of the labor party.
See:


Monckton tells journalists to do their homework; to compare the Communist Manifesto with the Australian Greens Policies.

Reds under the Bed?


Former Hawke Government Environment Minister Barry Cohen: "The trouble is that, with the collapse of Communism, the left wing of the Labor party, they've infiltrated the Greens and now to a great degree control it."


In (Greenpeace Founder Patrick) Moore’s words they have become far more extreme and whose politics is little more than neo-Marxism in green garb.

IPCC and Greenpeace - Partners in Deception

Tim: They're trampling on the Truth


When Maurice Strong set up the IPCC the first thing they did was set the definition of climate change that we will look at are only they changes caused by human activity.

Beware. The communists controlled the media. Their newspaper "Pravda" had a title that means "Truth."

In fact, it was far from it, only publishing propaganda.


Last night, a little more of the Greens' red underbelly was displayed when Christine Milne, on QandA, mentioned her intention to follow the Communist Manifesto and control the Australian Media.  If she wanted to attack bias in the media, the first place she should go is QandA, probably the most biased program on the biased ABC.

Curiously, on their website, QandA is subtitled "Adventures in Democracy."

On FrontPageMag, David Solway has done an analysis of the Greens.


It should be clear by this time that there is no medium of intellectual exchange with the left, that facts do not matter, that logic is helpless to convince or to prompt even the slightest reconsideration, and that practically every counter-argument can be turned on its head and interpreted as confirmation of the original idée fixe.

David says that we should examine the "three button issues of the current historical moment."

His second issue is Universal Health care which he describes as "an unmitigated disaster." In Australia when everyone that could, took out health insurance and the needy were covered by the state, there were no big bureaurocracies and no long queues for surgery.

The third "is the left’s propaganda offensive against the Jewish state along the entire continuum from the religious to the secular..." When don't have to go past Newly elected NSW anti-Israel senator Lee Rhiannon for a local example.

However it is his first that attracted my attention.


Evidence is piling up to suggest that the human contribution to global warming—assuming it exists—is far less than originally assumed and that a meteorological calamity is highly unlikely. Fully two-thirds of the scientists attending the 33rd International Geological Congress in Norway in August 2008 were hostile to, even contemptuous of, the UN’s IPCC reports on global climate catastrophe, which had been shown to be fatally compromised by glaring errors, false predictions and spurious sources. The science is not only not “settled” but demonstrably fraudulent, whether we are considering Michael Mann’s now infamous “hockey stick” graph and tree-ring manipulations, Al Gore ’s exploded theories, the Hadley email dump, IPCC chairman Rajendra Pachauri ’s melting Himalayas (and other absurdities since discredited), the hopelessly astray IPCC computer models, the deliberate and methodical suppression of findings that indicate the planet has been cooling since at least 2002 and probably several years before that, James Hansen’s underwater New York, the Goddard Institute’s specious data—we can exceterize indefinitely.

He quotes professor emeritus of biogeography at the University of London - Philip Stott. Global Warming has "become the grand political narrative of the age, replacing Marxism as a dominant force for controlling liberty and human choices."

".....The Subsidies to "Green" energy as they call it -  and it's a bit if a misnomer when you think about it because cutting down all the trees.... to put up wind turbines to kill birds and produce a little bit of energy is hardly what you'd call "Green...."

Subsidised "Green" or "Renewable" energy sources must drive up everybody's power costs, drive up manufactoring costs, drive up retailers costs and drive up  cost of living across the board.


"....It's a free market. If people want to pay more if they believe for example that we can stop climate change by our energy choices, then fine, they can pay for it but the idea that they use tax money for this is an enormous mistake."

For the International Climate Science Coalition go to:
http://www.climatescienceinternational.org .
Posted by Geoff on July 26, 2011 1 comment: 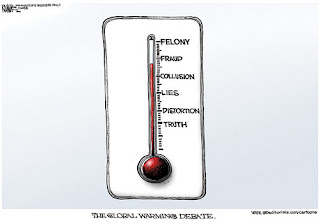 The study is available via free open access at http://benthamscience.com/open/toascj/articles/V005/74TOASCJ.htm (links to full paper and supplemental information, both PDF, follow at the end of this post)

4) Warming due to anthropogenic GHG+Aerosol of 0.66 oC/Century is not alarming, in comparison to the IPCC protected 2.3 oC/Century This 0.66 value is an upper bound in our estimation (due to possible poorly corrected UHI and LULC effects that may explain part of the observed warming trend since 1950).
5) Cooling/flat temperatures till 2030 are likely (as also predicted by others).
6) Our result matches the historical record better than any other attribution study and better than GCM outputs.