Reply the ABC:Drum refused to publish

Anthony Cox and David Stockwell wrote an article called: "Honest Jim: the science is not settled," which was
published on the ABC:DRUM.


The DRUM and Geoff Davies countered with:

Climate science and James Hansen misrepresented.
When Cox and Stockwell submitted a reply to the ABC, the ABC refused them the right of reply.


At a time when the Gillard Green Coalition is trying to substantiate its despised carbon (dioxide) tax and has issued a rushed flawed report by Will Steffen (see previous) , the ABC, Man-made Global Warming propagandists (see here) probably though it unwise to publish the reply.

So, here is their reply: 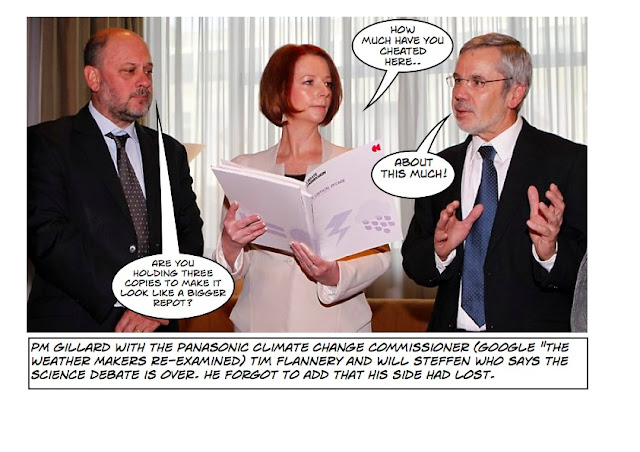 The first cheat is in the name of the committee: MULTI-PARTY CLIMATE CHANGE COMMITTEE.
Oh really, how many is Multi? Well, would you believe only two parties? That's right - according to this mob of government-bought "commissioners, Multi = two. Spread your arms a bit further, Professor Steffen.
So, who are these expert scientist - the bread in the above Gillard sandwich? Well, first you have Tim Flannery. Is he a climate expert? Well, figure it out for yourself. This man, who is sponsored by Panasonic, wrote a book called "The Weather Makers." In a recently published volume "The Weather Makers - Re-examined (link)," it is alleged that The Weather Makers is shown to contain
Note also that it was Professor Flannery who said that even if all carbon emissions stopped today, it would take 1000 years for the atmosphere's average temperatures to drop.Tim Flannery worships at the temple of GAIA, even though the originator of the GAIA theory, James Lovelock, has since reversed his thinking.

Dr David Evans (soon to tour with Lord Monckton) has pointed out some interesting items about Professor Flannery:

Tim Flannery made several bogus predictions about never ending drought and of various Australian cities running out of water, which encouraged those cities to buy unnecessary desalination plants. Now we find out Flannery was working for Siemens, and Siemens makes parts for desalination plants, and Siemens got fined $2 billion by the US and Europe for winning government contracts by bribery. Flannery says his work for Siemens was "voluntary". He does not ever have an undergraduate degree in science, but in English. So, obviously, the ABC and the ALP go to him for climate science rather than a real quantitative scientist who has not made wildly wrong predictions -- what does Flannery have to do to rule himself out? (What did Upton Sinclair say, about a man not seeing something if his job depended on not seeing it?)

Is the other Professor,  Professor Will Steffen, a climate scientist? To again quote David Evans:


No, he's a crystallographer (Chemistry) His papers are all about the effects of the IPCC's projected changes, not on understanding or modeling the climate. If the IPCC is wrong, all his papers and his position and his unit at the ANU are all worthless.

Professor Steffen was on radio with Steve Price and Andrew Bolt and couldn't answer a direct question.
Listen here ( about half way along).

The Report:
1. There is no doubt that the climate is changing. The evidence is overwhelming and clear.

OK so far. Climate has been changing since the beginning of time.

3. Human activities – the burning of fossil fuels and deforestation – are triggering the changes we are witnessing in the global climate. This is an unproven, in fact falsified, hypothesis.

Professor Bob Carter is leading a team of scientists who will make an analysis and rebuttal of this report. He has already addressed most of the matters in articles he has written:
A Dozen Global Warming Slogans  and Global Warming - an essential reference.
Posted by Geoff on May 24, 2011 1 comment: