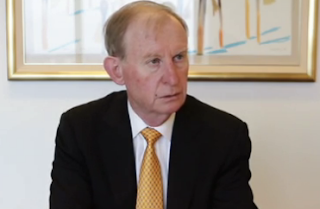 ALI MOORE: Just a final question. This week starts the mark of a UN - or the UN, I should say, climate change talks in Durban. Would you describe yourself as a climate sceptic?

DAVID MURRAY: Ah, yes. A sceptic is not the word you should use when you disagree with somebody. You should say you disagree. And I don't think there is sufficient evidence to take the sort of risks that are being taken around the world. I've always thought that with the global population growing as fast as it is, that there would be real pressure on energy prices and people would correct automatically by using energy much more sparingly and that would start to self-correct - if there's a problem.

ALI MOORE: So you don't rule out there being a problem; you're just not convinced there's a problem.

DAVID MURRAY: No, but with these things one looks at probability and severity. And you look for actions you can take which would reduce the severity if the problem is there. But if we're not certain that the problem's there, then we don't - we shouldn't take actions which have a high severity the other way.

ALI MOORE: What evidence do you look at to counter the other evidence that there is climate change? Is there something in particular that you focus on?

DAVID MURRAY: Well, the extremeness of the claims is one thing. For example, people talked about the ocean rising by seven metres, which is just an astounding level.

ALI MOORE: But what about the more ...

DAVID MURRAY: The science talks about 20 to 30 centimetres. So these exaggerated claims. When people make a movie and get on a ladder to get to the top of the chart, that's Hollywood, it's not science. And when scientists start arguing amongst themselves, as we've seen with some of these reports, that is not good. Science is meant to be above all of that with true scientific method. So that really bothers me. And the claims are unreal and ...

ALI MOORE: Are all the claims unreal?

DAVID MURRAY: Well, it's not clear to me which comes first: temperature or carbon - carbon dioxide. I'm not sure which does come first. There is much evidence to say one way or the other. So, when I look at all this, I become extremely concerned and I become concerned at the cost of mistakes.

ALI MOORE: David Murray, I think that's a debate for another day, but many thanks for talking to Lateline tonight.