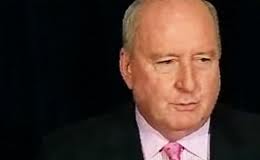 Julia Gillard "remarked that, in a choice between acting on the advice of the national science agency, the CSIRO, and Sydney radio presenter Alan Jones, she had opted for the CSIRO, while Abbott had chosen Jones."  The PM's remark was as accurate as her government's twin lies of carbon pollution. Alan has paraded an awesome cavalcade of scientists; Gray, Lindzen, Plimer, Carter etc etc. All agree that the science is far from settled.

Quite frankly, Julia, I know who I would trust!

Over in the US, there is a similar story.

From American Thinker via C3.


Obama has failed in large measure because the credibility and thus the hysteria of his science have eroded.  Obama has been stymied by a public made skeptical because of the shenanigans of the U.N.'s IPCC and the self-promoting climate experts in East Anglia and the United States.  Can Obama recover?  Not before the next election, but if he is reelected (bite your tongue), and if he can resuscitate the hysteria by co-opting NOAA, the cream of American governmental science, he has a good shot at it.  Bear in mind that Obama has a predilection for using regulatory agencies (e.g., the EPA) as weapons.

The leftie/liberal/progressive approach to climate science has been a consistent mixture of radical politics and non-empirical, pseudo-science hysteria.
In order to institutionalize this approach at major government agencies (ie, EPA, NOAA, NASA), Obama chose agency/cabinet heads who would bring the fringe Big Green's politicized science to bear. No better example of this approach is the Obama appointment of a Big Green zealot, the anti-growth Environmental Defense Fund's own Dr. Jane Lubchenco, who is actively putting in place the Orwellian ministry called the "Climate Service Office," where the green's fictional science becomes truth.